James Neal had three goals and an assist and Ryan Nugent-Hopkins had a goal and three helpers as the Edmonton Oilers barely hung on for a 7-5 victory over the New York Rangers after holding a 6-0 lead on Tuesday.

The Edmonton Oilers almost allowed what would have been a dubious first in NHL history on Tuesday.

James Neal had three goals and an assist and Ryan Nugent-Hopkins had a goal and three helpers as the Oilers barely hung on for a 7-5 victory over the New York Rangers after holding a 6-0 lead.

No team in NHL history has ever come back to win from a 6-0 deficit.

"We got a little passive in the third," Nugent-Hopkins said. "They have some high-end skill that will make you pay if you sit back too much, but at the end of the day we got the two points and we're happy with the win."

Leon Draisaitl, Josh Archibald and Kailer Yamamoto also scored for the Oilers (21-17-4) who snapped a two-game losing skid and won for just the third time in their last 11 games. 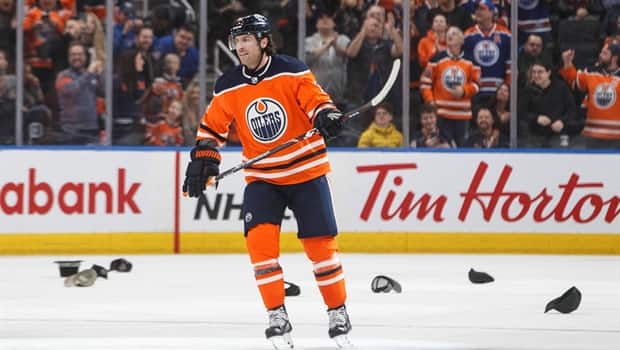 It was also the first time the Oilers have won a game on New Years Eve since 1985, going 0-13-3 with a tie during that span.

"I was one year out of being a rookie in the league, that is a long time ago," said Oilers head coach Dave Tippett. "I found that stat hard to believe when I heard it, but if that is the case I am glad we were able to break the streak."

Rangers head coach David Quinn said his team showed some tenacity by not giving up, but they should not have been in the situation in the first place.

"We showed some things we're going to need moving forward," he said. "That being said, we can't lose sight of the fact we can't start a game like that and we have to build on that ending and carry that over."

After allowing a goal 11 seconds into their loss to Calgary on Friday, the Oilers scored 11 seconds into their game against the Rangers on their first shot, as Zack Kassian made a backhand pass in front to Neal, who directed home his 17th of the season past New York goalie Alexandar Georgiev.

Edmonton took a two-goal lead on the power play nine minutes into the opening period as Neal tipped in a long Oscar Klefbom shot for his second goal of the game.

The Oilers kept coming with yet another goal two minutes later as Nugent-Hopkins redirected in his eighth of the season off of an Ethan Bear shot, giving Edmonton three goals on six shots.

Edmonton went up 4-0 with another power play goal with seven minutes left in the second frame as Nugent-Hopkins kicked the puck back to Draisaitl in traffic in front and he scored his 23rd.

The Rangers took a bench penalty out of frustration with the officiating and the Oilers scored another power play goal just 12 seconds later as Connor McDavid dropped it back to Neal, who blasted in his hat trick goal.

Quinn wasn’t happy with two calls on Lindgren. He did this after Goal No. 4, and he was assessed a penalty. <a href="https://t.co/XrpqOAs6Za">pic.twitter.com/XrpqOAs6Za</a>

Edmonton scored their third goal in less than three minutes as Archibald snapped home his third, chasing an irate Georgiev from the net with Henrik Lundqvist coming in.

"When I scored that [6-0 goal] I never would have thought it would have been the game-winning goal," Archibald said.

The Rangers finally got one past Oilers goalie Mikko Koskinen as Kreider sent a one-timer into the net with 25 seconds remaining in the middle period.

New York got another one back five minutes into the third as Strome converted on a great pass from Adam Fox.

The Rangers then gave the Oilers a significant scare with two goals in 38 seconds as Staal scored his second of the season and then Panarin notched his 22nd of the campaign to go along with three assists.

The comeback continued with 3:45 left in the third period as Koskinen made a glove save on a Zibanejad shot, but that glove was deemed to be well over the goal line.

The Oilers managed to finally put the game away with an empty net goal by Yamamoto, who was playing his first game of the season.