Taylor Hall had a goal and two assists, setting up Stefan Noesen's game-winner with 7:05 play, and the New Jersey Devils scored four times in the third to claw their way back into their first-round series with Tampa Bay on Monday night, beating the Lightning 5-2 in Game 3.

With the New Jersey Devils' first playoff appearance since 2012 starting to look like an early exit, Taylor Hall came up big — just like he has done all season.

Hall had a goal and two assists, setting up Stefan Noesen's game-winner with 7:05 play, and Cory Schneider made 34 saves in shoring up the goaltending and leading the Devils to a 5-2 victory over the penalty-prone Tampa Bay Lightning on Monday night in Game 3 of their best-of-7 first-round series.

The Devils scored four third-period goals in cutting Tampa Bay's series lead to 2-1. Game 4 will also be played at the Prudential Center on Wednesday.

Hall, appearing in the playoffs for the first time since being the No. 1 overall pick in 2010, downplayed his role.

"It's not my first playoff win, it's ours as a group," said Hall, who had a career year in goals, assists and points. "We had some confidence coming back on home ice with how we played to finish the regular season. It's a great feeling. We're still down 2-1. We still have a lot of room to go but it's a nice start."

The Devils had a lot of contributors. 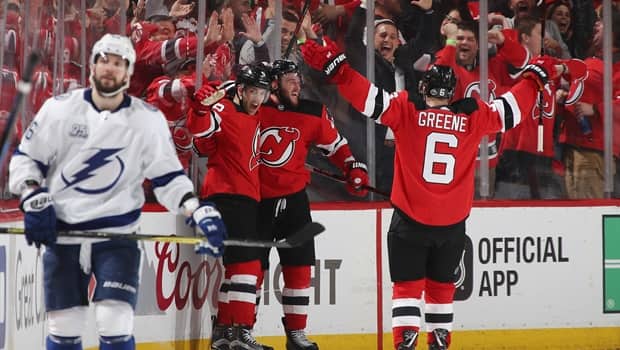 Rookie Will Butcher had a power-play goal earlier in the third to tie the score 2-all. Blake Coleman and Ben Lovejoy added empty net goals late. Schneider only gave up two power-play goals in taking over for Keith Kinkaid and giving the Devils a chance in this series.

'We're on each other's nerves'

"It's huge. You could see there at the end it getting a little nasty similar to the last game," Schneider said of the win. "We've got the emotional involvement now. We're on each other's nerves. It's going to a series."

Alex Killorn and Steven Stamkos each had a power-play goal and an assist for the Lightning, who allowed the Devils to go on seven power plays. Nikita Kucherov added two assists, and Andrei Vasilevskiy made 36 saves in the game that had a major scrum with 23 seconds to go.

"At the end of the day you give them that many power play chances and then you give them a 5-on-3, it's a good chance they are eventually going to get one," Stamkos said. "They got one and then they got momentum."

Hall was the Devils' MVP during their stunning run from the worst team in the Eastern Conference to the postseason in a year, and he didn't disappoint in their biggest game of the season.

Hall skated down the right boards, avoided a check by Tyler Johnson in centre ice and found Noesen in the left circle with a cross-ice pass that the forward one-timed past Vasilevskiy.

"He's a good player and good players are going to make plays," Lightning centre Brayden Point said. "He had a good night tonight. He is a guy we have to watch, know when he is out there and take away his space."

Butcher had tied it at 4:03 of the period, just 24 seconds after the Lightning were penalized for having too many men on the ice during a penalty kill.

"We were our own worst nightmare tonight," Tampa Bay coach Jon Cooper said.

The Lightning, who scored on 3 of 4 power plays in the first two games, converted on two more in Game 3.

Stamkos gave Tampa Bay a 2-1 lead just 38 seconds into the third with a shot from the left circle that squeezed between Schneider's arm and body and dribbled into the net. It was his first goal of the series.

Tampa Bay, which never trailed in winning the first two games, took the lead again 42 seconds into the second period on Killorn's third power-play goal of the series and fourth overall. Kucherov sent a pass from behind the goal line that Killorn redirected into the net before Schneider could move.

Hall tied the game 1-all with an unassisted goal at 12:24. Vasilevskiy made an excellent stop on a shot from near the blue line by Kyle Palmieri. The puck was misplayed by the Lightning and went to Hall between the circles and he ripped a shot past Vasilevskiy.

Hall could have had more. He hit the crossbar on a first-period breakaway.