The good news for the Tampa Bay Lightning is they're up 2-0 on New Jersey in the first round of the playoffs and still haven't played their best hockey.

It's great to play well, even better to win.

That's how the Tampa Bay Lightning view a 2-0 series lead over the New Jersey Devils.

"As a coach, you care about everything. You'd like to say you played the perfect game, but somebody else has a vote out there," coach Jon Cooper said Saturday after a 5-3 victory in Game 2 of the first-round matchup.

"When we wake up tomorrow, you look back and say: 'OK, which parts of the game did we do well.' And we'll be able to look at a lot of that tape and say we did really well. And we'll look at some and say that wasn't so good," Cooper added. "I'm pretty sure New Jersey is going to do the exact same thing. It's the playoffs. There's going to be battles, there's going to be swings of momentum, but the big thing for me is who won the game."

Alex Killorn scored twice during a four-goal second period, and Andrei Vasilevskiy stopped 18 shots in the final period to hold off the pesky Devils. 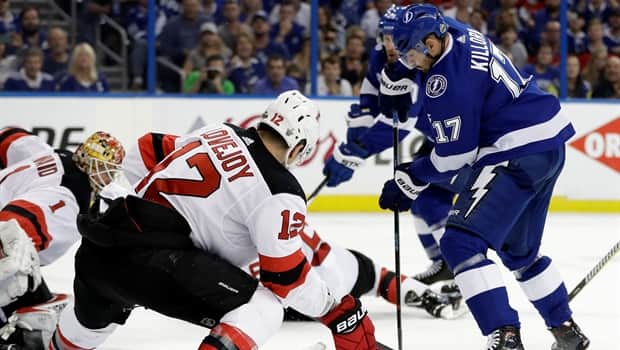 "We did bend a little bit in the third but didn't break, so it's a good feeling to be up 2-0," Lightning defenceman Victor Hedman said. "You've got to win the game. That's the bottom line."

The Atlantic Division champions scored three times in a 2:47 span in the second period, and the reeling Devils pulled goalie Keith Kinkaid after Killorn's third goal in two games made it 5-1 with 6:48 remaining in the period.

Nikita Kucherov, Brayden Point and Tyler Johnson also scored for Tampa Bay, which is up 2-0 in the series after going 0-2-1 against the Devils during the regular season.

The Devils have played well in spurts, overcoming slow starts to keep both games interesting.

"There's a lot of good things in our game to like," Devils leading scorer Taylor Hall said. "It's a long series. They still have to win two more to put us out, and we're going to battle on home ice to get that back."

"We have to embrace the fact that we're down 2-0," Hynes said. "What I mean by that is we can say we had strong pushes in certain things, but I think we did take a step tonight. We have to win one game. We've got to play good once, and we've got to have that on Monday."

Goalie Cory Schneider came off the bench to help the Devils stay in the game with 10 saves, nine in the final period.

'I thought Cory came in and played really well'

Hynes wasn't ready to discuss whether he'll change starting goaltenders for the next game. Kinkaid was a big part of New Jersey's success after Schneider went down with groin and hip injuries in January, earning the right to start his first playoff series.

"I thought Cory came in and played really well," Hynes said. "I'm not going to speculate on whether we're going to use him or not use him."

Five players scored in the Lightning's 5-2 victory in Game 1, with just one of the goals coming from the team's top line of Kucherov, Steven Stamkos and J.T. Miller — Kucherov's empty-netter with a little over a minute remaining.

Tampa Bay's second and third lines once again did most of the damage, with Point scoring at 12:15 of the first period and Killorn, Johnson and Kucherov adding goals during a three-minute stretch of the second to build a 4-1 lead.

Both of Killorn's goals came on power plays. Kucherov's second of the series deflected off Vatanen's stick into New Jersey's net.

Vasilevskiy stopped 29 of 31 shots in the opener and was outstanding again Saturday. New Jersey outshot the Lightning 44-25, including 19-9 over the final 20 minutes.

"We did a great job in the third period. Too little, too late, but I think we showed fight," Schneider said. "It is what it is. They're a good team at home. They protected home ice and now we have to try to go back and do the same in our building."