The Ottawa Senators needed someone to step up, so Mark Stone volunteered.

Stone had two goals and three assists as the Senators beat the New Jersey Devils 7-3 on Tuesday to avoid their third straight loss.

"I think we've lost six out of seven games so we needed a win. We haven't been playing our best hockey so maybe this can help this team move forward.," Stone said.

Colin White also had two goals while Thomas Chabot, Ryan Dzingel and Magnus Paajarvi, into an empty net, had the other Senators (6-6-3) goals. Craig Anderson made 30 saves before he was replaced by Mike McKenna (six saves) for the final five minutes. Chabot also had two assists while Matt Duchene had three.

Stone steps up for Senators: 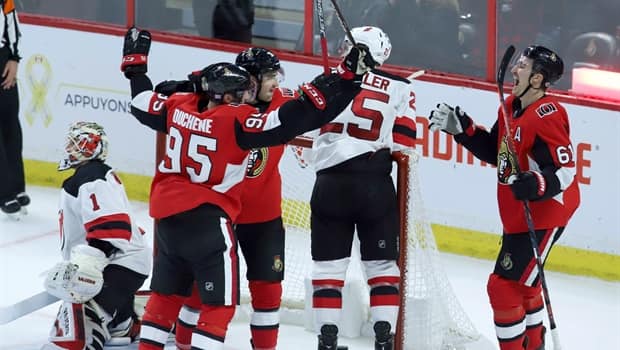 Cory Schneider started in goal for the Devils but was replaced by Keith Kinkaid in the second period after allowing four goals on 22 shots. Kinkaid turned aside 17 shots in relief.

Duchene says 'It's been a tough couple of days'

It was Ottawa's first game since a viral video showing seven Senators players criticizing the team and assistant coach Martin Raymond during an Uber ride was posted online.

Duchene apologized following the game and said it was impressive how the team responded despite the difficult situation.

"I want to take this opportunity to extend my absolute sincere apologies to Marty Raymond. He's a heck of a person and coach and he did not deserve what we said. I sincerely, sincerely mean that on behalf of myself and my teammates," Duchene said.

"It's been a tough couple of days for a lot of people and we needed to respond and we did [with a win]. We've dealt with things and everything in [the room] is good. We're moving forward and it's hard for me to even talk about because it makes me emotional and it's not the person I am, or any of us. We've done a heck of a job bouncing back tonight as a whole group and I've said it all season and I'm going to keep saying it, we have a heck of a group in here."

Hall got the game's first goal as he used a toe drag to bring the puck into the slot and fire a shot past the glove hand of Anderson just 3:14 into the game.

That lead was doubled at 11:20 when Palmieri deposited a backhand off a rebound past Anderson, but for the next 48 minutes it was all Senators.

"Those first 10 minutes we got rewarded for what we wanted to do. We were playing with speed, we were playing a north-south game and we were getting rewarded. You'd think it would be easier that way to just stick with it," Devils captain Andy Greene said.

"All of a sudden we were moving east-west, we stopped moving our feet and that seems to be the problem. The way we were playing you'd think we'd stick with a north-south game."