Tomas Tatar and Phillip Danault each scored a pair of goals as the Montreal Canadiens won their fourth straight game in Winnipeg with a 6-2 victory over the Jets on Monday.

Brendan Gallagher and the Montreal Canadiens are feeling the holiday cheer ahead of time.

Tomas Tatar and Phillip Danault each scored a pair of goals as the Canadiens won their third of four straight games on the road with a 6-2 victory over the Winnipeg Jets on Monday.

"It's kind of nice to go into this [Christmas break] feeling good about ourselves," said Gallagher, who picked up a pair of assists.

"I've had the opposite. You know, you lose a few games and it eats at you. You're able to enjoy Christmas a little more this way, and then when you come back you've got another three very, very critical games." 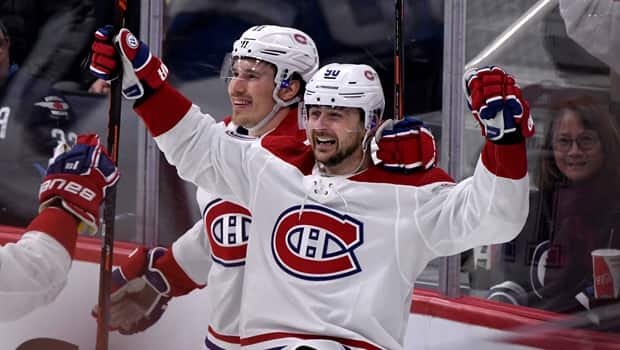 1 year ago
1:37
Tomas Tatar saved a goal and scored a pair in the first while Phillip Danault went back-to-back in the second en route to a dominant Canadiens win over the Jets.  1:37

Max Domi and Artturi Lehkonen both contributed a goal and assist for the Canadiens, who head out for three more road games after the break, starting against the Tampa Bay Lightning on Saturday.

Carey Price stopped 27 shots for the Canadiens, who also won their fourth straight game at Bell MTS Place. They last lost in Winnipeg on March 5, 2016.

The crowd at Bell MTS Place included plenty of fans wearing Canadiens jerseys and cheering when the visitors scored.

"Over this road trip, we've had a lot of that," said Montreal rookie forward Nick Suzuki, who had a pair of assists. "People from all over Canada are big Habs fans so it's awesome to have their support on the road."

Kyle Connor and Patrik Laine scored for the Jets (21-14-2), who have lost their past three home games at Bell MTS Place. Mark Scheifele assisted on both goals.

Laurent Brossoit made 42 saves for Winnipeg, which is 2-4-0 in its past six games.

"I'm not saying we're dominating, but their guy made some saves and it's a real good hockey game," Jets coach Paul Maurice said of the first period.

"A tough break at 3-1 and then a couple of mistakes and now you're reeling a little bit. It snowballed on us a little bit there in the second."

Winnipeg scored the game's first goal, but Montreal ignited for four goals in a row and led 5-2 after the second period.

Laine had a goal erased after an offside coach's challenge nine minutes into the first period, but Connor scored his 15th goal of the season at 11:30 on the power play.

Montreal outshot Winnipeg 17-16 in the first period, and then 17-6 in the second.

"It's a bummer. Those definitely go against us," Jets captain Blake Wheeler said of the disallowed goal. "We've got to put an emphasis on staying onside I guess.

"It's too bad. It was a heck of a goal. Real pretty, great play by those guys. That one hurts to come back. Game changed in the second period."

Danault's first goal at 4:37 of the second came after Brossoit mishandled the puck. It went to Gallagher, who whirled around and shot it, and Danault batted in the rebound for a 3-1 score.

Danault's 10th goal of the season came seconds after a face-off to stretch the lead at 8:56 of the second.

"[Price] was big for us," Danault said. "He made some big saves, and by doing those big saves it gave us a chance to win the game. And obviously, we capitalized on a couple chances we had."

Laine fired a wrist shot past Price to squeeze the gap 4-2 at 16:14, but a Winnipeg turnover led to Domi's goal off a rebound with 40 seconds left in the middle frame.

Domi has three goals and three assists during a four-game point streak.

Laine has five goals in his past five games. Scheifele has racked up eight goals and seven assists in his past 10 outings.

A Winnipeg defensive turnover led to Lehkonen's goal at 11:08 of the third. He has a goal and four assists in a three-game run.