Tomas Tatar scored in the fourth round of the shootout as the Montreal Canadiens held on for the dramatic 5-4 victory over the Vegas Golden Knights on Saturday night.

Carey Price went from dejection to jubilation in a matter of minutes.

Price and the Montreal Canadiens squandered a two-goal lead late in the third period but held on for the dramatic 5-4 shootout victory over the Vegas Golden Knights on Saturday night.

Vegas scored twice in the final two minutes to force overtime with Marc-Andre Fleury on the bench for the extra skater. When Price conceded the equalizer to Reilly Smith with eight seconds left in regulation, he smashed his stick in anger.

After an end-to-end overtime, Price stopped Smith with the pad in the fourth round of the shootout to claim victory. The Canadiens goaltender jumped up, threw his arms in the air and swarmed his teammates in celebration.

WATCH | Habs rally to down Golden Knights in SO: 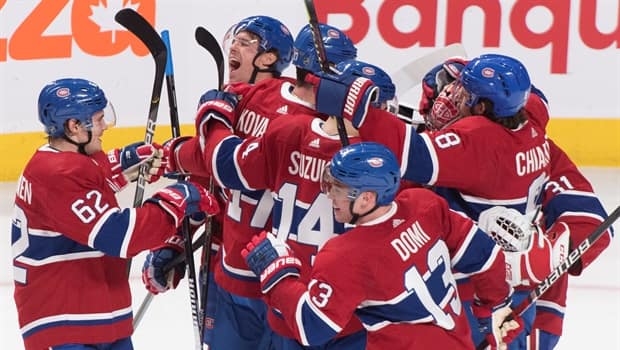 1 year agoVideo
1:01
After blowing a late two-goal lead, Montreal rallied to beat the Golden Knights 5-4 in a shootout. 1:01

"It was important for [Price] to win that game," said coach Claude Julien. "That was all that mattered to him. It's frustrating that they scored twice in the final two minutes. It wasn't pretty but it was exciting. We got two points and we'll take it."

Max Pacioretty scored against his former team with a shot from the blue line through traffic with 1:57 left in regulation before Smith tipped Paul Stastny's shot past Price.

Montreal outshot Vegas 7-1 in overtime, with Fleury making highlight-reel saves on Phillip Danault and Ilya Kovalchuk on odd-man rushes to force a shootout. Tomas Tatar scored the shootout winner in the fourth round.

"[Vegas] was carrying a lot of momentum at the end of that game," said Price, who made 31 stops for his fourth consecutive victory. "They were making a push. We pushed back well in the overtime and found a way to do it in the shootout."

Kovalchuk scores 4th as a Hab

The Canadiens (22-21-7) have won four of their last five games as they enter their bye week clinging to slim playoff chances.

"We've been playing some pretty good hockey," added Price. "If we can continue to do that, and understand what's making us successful, we have to carry that momentum after the break."

Montreal took a commanding 3-0 lead on nine shots after the first 20 minutes.

Nick Cousins slid the puck under Fleury's outstretched pad at 5:51, his first of the game, on a pass from Dale Weise behind the net.

The 36-year-old Kovalchuk scored his fourth in a Canadiens uniform to double the lead at 12:33. Fleury denied Kovalchuk's initial shot in close but he couldn't stop the Russian's second effort.

The goal was Kovalchuk's first at Bell Centre since 2011. His first three goals since joining Montreal came on the road.

"Unbelievable hockey city," said Kovalchuk, who has eight points in eight games with his new team. "I never played in an environment like this. I appreciate it and we're going to keep going. We're going to keep pushing."

The home team went up 3-0 when Joel Armia deflected Brett Kulak's shot and beat Fleury five-hole for his career-high 13th of the season. Fleury stopped 28-of-32 shots in defeat.

In the second game under new coach Peter DeBoer, the Golden Knights (25-19-6) scored twice in the second period to come within one.

An unmarked Jonathan Marchessault tallied from the slot on a pass from Smith behind the net at 9:08. Veteran Stastny jammed a loose puck past Price to make it 3-2 at 14:47.

"We're getting off to slow starts and teams are capitalizing," said Smith, who has 20 goals this season. "We have to find a away to turn that around. It's too hard to come back in every game."

Cousins scored his second of the game on a 2-on-1 with Weise at 9:40 of the third to give Montreal a 4-2 advantage.

"It's nice to get rewarded," said Cousins of his fourth line. "We're all hard-working guys. We all play a similar style. I'm just fortunate enough to be on the end and finishing plays. Two great passes by Weise made it easy for me."