Canadiens treating play-in qualifier against Penguins as a playoff series

Nick Suzuki's first NHL playoff series technically isn't a playoff, but he and his Montreal Canadiens are going to treat their five-game play-in set against the Pittsburgh Penguins like it is.

Nick Suzuki's first NHL playoff series technically isn't a playoff, but he and his Montreal Canadiens are going to treat their five-game play-in set against the Pittsburgh Penguins like it is.

The Habs had the first full scrimmage of their shortened training camp on Saturday after the NHL allowed its clubs to resume team practices last Monday. Suzuki told media after the scrimmage that veterans in Montreal's locker-room have been telling him and his teammates to think of the upcoming matchup with Pittsburgh like a regular post-season series.

"There's some guys that might never make the playoffs, so you need to take things as personally as you can, to do everything you can, to be an impact player, help the team win," said Suzuki, quoting veterans Shea Weber and Brendan Gallagher.

"It's exciting for me. It's not the playoffs yet — it's qualifiers — but we're taking it as our first round."

The 20-year-old Suzuki had 13 goals and 28 assists in 71 games in his rookie season before the NHL suspended play due to the COVID-19 pandemic. He said he was able to skate 12 times and continue to work with his personal trainer during the three-month layoff, hopefully letting him hit his stride as soon as play resumes.

WATCH | Habs hit the ice for 1st time since season was paused: 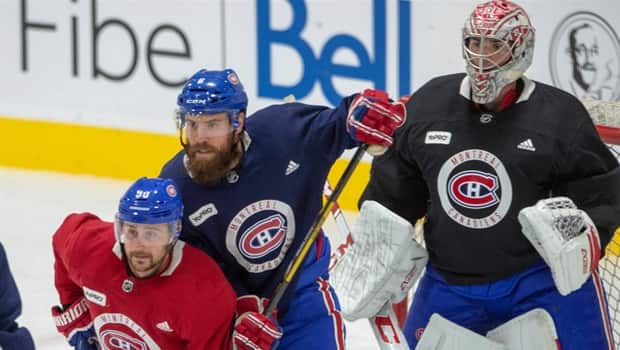 Montreal Canadiens return to the ice focused on NHL's return

8 months ago
2:57
The Montreal Canadiens were on the ice for the first time as a full team since the league went on pause in March due to COVID-19. 2:57

He'll be thrust into a dream — or nightmare — scenario against the Penguins as he'll be lining up against the potent 1-2 punch of Sidney Crosby and Evgeni Malkin, two players he grew up watching.

"Obviously, they've been two of the top players in the league for a long time," said Suzuki. "They've been in a lot of playoffs and I've always been watching.

"I'm definitely up for the challenge. I know it's going to be a difficult series but I think we've got a lot of young centremen who are eager to prove they can play against some of the top players."

Aside from intra-squad scrimmages, the Canadiens will play their old rival, the Maple Leafs, on July 28 in an exhibition game in Toronto as both teams try to tune up for the NHL's adjusted playoff format.

Montreal then begins its best-of-five series with Pittsburgh in the Eastern Conference hub city of Toronto on Aug. 1, with the winner advancing into the actual Stanley Cup playoffs.

Shutting down Crosby and Malkin — two of the most experienced and productive centres of the past decade — is a responsibility also shared by veteran defenceman Jeff Petry.

"I think it's always a challenge, whether it's in the regular season or in these unique circumstances," said Petry. "It's a matter of preparing ourselves in these practices leading up to it and that one exhibition game before the start of it to work on the things we need.

"They're special players and they have a lot of skill, so it's just a matter of making sure we're prepared and playing them tight."