Paul Byron scored two goals and added an assist, leading the Montreal Canadiens to a 5-1 victory over the Pittsburgh Penguins on Saturday night. Byron had his first multi-goal game since scoring a hat trick last December against Detroit.

The Montreal Canadiens used a systematic approach to frustrate and shut down the Pittsburgh Penguins' star-studded attack.

Paul Byron scored two goals and added an assist, leading the Canadiens to a 5-1 victory over the Penguins on Saturday night.

"Our plan was just to skate and forecheck relentlessly," Byron said. "When you give [the Penguins] space to skate, they're going to make plays all night. But when you close lanes, I think that makes it hard for them."

The Canadiens opened the season with three of four possible points in two road games against Toronto and Pittsburgh. Byron contributed Saturday with his first multi-goal game since scoring a hat trick last December against Detroit.

Brendan Gallagher, Joel Armia and Charles Hudon also scored for the Canadiens, who snapped a five-game losing streak against Pittsburgh. It was Montreal's first win against Pittsburgh since Al Montoya's 36-save shutout Oct. 18, 2016.

Carey Price made 21 saves on Saturday for his first win against Pittsburgh since Oct. 13, 2015. Price had plenty of help as the Canadiens blocked 22 shots, one more than he faced.

"It's definitely huge to get those blocks," Price said. "A couple of them, especially in the first period, could've been a game-changer." 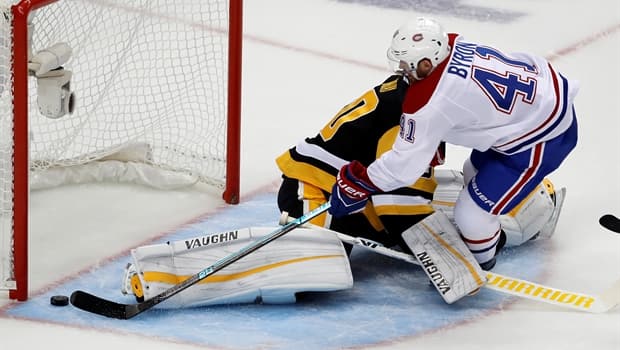 2 years ago
1:44
Paul Byron jump started Montreal's offence with two goals and an assist to help the Habs take the 5-1 win. 1:44

Riley Sheahan scored for Pittsburgh, which lamented its puck management during a wild season-opening 7-6 overtime win against Washington on Thursday.

Kris Letang, a Montreal native, had an assist and passed Hall of Famer Paul Coffey for most points in team history by a defenceman with 441. Matt Murray, who has allowed 11 goals in two games, made 24 saves in the loss.

"I think we're a team right now that just wants to score instead of playing the game the right way and that means playing on both sides of the puck," Penguins' coach Mike Sullivan said. "Right now, we're not even close to where we need to be. I know we have a talented group and I know we can score. Until we learn how to play defence and become harder to play against, we're not going to control outcomes."

Last season, Pittsburgh scored five goals in each of its three games against Montreal. The Canadiens returned the favour with a five-goal outburst Saturday. The teams will meet again next Saturday in Montreal.

"It's obviously concerning," Sullivan said. "You don't ever want to get outworked. I thought they played harder and smarter. They were hard to play against."

Gallagher scored the game's first goal midway through the opening period. Tomas Tatar's initial shot off the rush hit Penguins' defenceman Olli Maatta and bounced to Gallagher, who converted the 2-on-1.

Byron's breakaway goal gave the Canadiens a 2-0 lead later in the period. He beat Maatta at the blue line and tucked a backhand-forehand deke between Murray's outstretched pad and the post.

Byron scored his second goal just 3:43 into the second period. Max Domi chipped the puck from behind the goal to Byron, who flipped a shot past Murray.

Byron had the primary assist on a short-handed goal later in the period to make it a 4-0 game. Armia finished the 2-on-1 pass from Byron with a backhand chip behind Murray.

"If they would've scored a power-play goal, it would've made it 3-1 and could've made it a completely different game," Byron said. "To get that fourth one, and take a little bit of wind out of the crowd, certainly helped us."

The Canadiens shut it down in the third period and outshot Pittsburgh 14-3. Hudon scored on a wraparound midway through the period.

"[Pittsburgh] is a potent offensive team and we respected their offence," Canadiens' coach Claude Julien said. "For us to close the game was important because we took the game to them."