Nick Suzuki buried the winner 22 seconds after Philadelphia tied the score in the third period, Brendan Gallagher snapped his frustrating post-season goal drought, and the Montreal Canadiens defeated the Flyers 5-3 on Wednesday to stave off elimination in Game 5 of their first-round playoff series.

Brendan Gallagher made sure his team still has a pulse in the league's summer restart.

The gritty winger snapped his frustrating post-season goal drought, Nick Suzuki buried the winner 22 seconds after Philadelphia tied the score in the third period, and the Canadiens defeated the Flyers 5-3 in Game 5 of their first-round playoff series.

Joel Armia added two goals, while Phillip Danault sealed it into an empty net late for the Canadiens, who still trail the best-of-seven matchup 3-2. Game 6 goes Friday back at Scotiabank Arena. 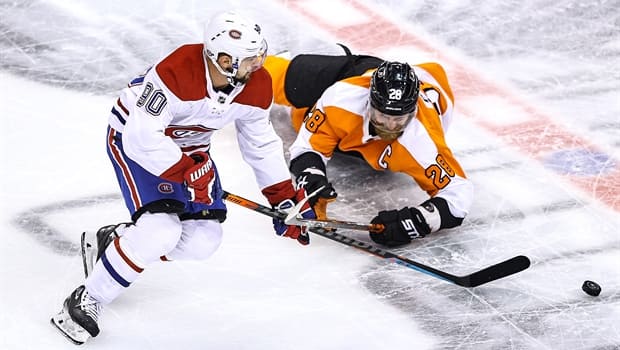 5 months agoVideo
1:03
Nick Suzuki provided the game-winner in an eventful 5-3 win for the Montreal Canadiens over the Philadelphia Flyers in game five. 1:03

Gallagher was benched for much of the third in Tuesday's 2-0 loss in Game 4 that pushed Montreal to the brink, but showed his uncanny determination from the drop of the puck in a do-or-die encounter.

"That's the Gally we love," Canadiens interim coach Kirk Muller said of the heart-and-soul competitor. "He brought guys into the fight."

Gallagher gave Montreal a 3-2 lead in the second on a four-minute power play, batting Suzuki's aerial pass out of mid-air before looking skyward in relief at 11:30.

"He's been getting down on himself for not scoring," said Suzuki, a 21-year-old-rookie. "It's nice to get that monkey off his back."

Gallagher, who scored on his league-leading 37th shot of the restart, snapped a personal nine-game post-season scoring slump dating back to 2017.

"One of the biggest hearts of any guy I've ever played with," said Montreal goalie Carey Price, who finished with 26 saves. "We know what we get from him ... he came up with a big one for us."

Gallagher wasn't available to the media post-game after losing a tooth following a cross-check to the face from Philadelphia defenceman Matt Niskanen that went uncalled in the third.

After two straight shutout losses, Muller challenged his top line of Gallagher, Danault and Tomas Tatar before the opening faceoff, and the trio set the tone early.

"This was a character win with our group," Muller said. "It started right from the first shift tonight with Phil's line and the intensity that Gally brought."

Brett Kulak and Jonathan Drouin chipped in with two assists apiece for Montreal, while Suzuki added his helper for a two-point night.

Jakub Voracek scored twice for the Flyers — both on a five-minute power play in the second period — and added an assist, while Joel Farabee had the other Philadelphia goal. Claude Giroux and Sean Couturier registered two assists each. Carter Hart, who was coming off those back-to-back shutouts, finished with 28 stops.

"There might be one or two he might want to have back," Philadelphia head coach Alain Vigneault said of his goalie. "But at the end of the day we have a lot of faith in him. He's played extremely well for us. He'll be fine next game."

After the Flyers knotted the score 3-3 on Farabee's power-play redirection at 10:37 of the third, Suzuki took a Drouin pass from behind the Philadelphia net on the next shift and outwaited Hart to score his second of the post-season as the Canadiens delivered a decisive counterpunch in the back-and-forth tilt.

Montreal, which entered trailing 3-1 in the series despite giving up just five combined goals, watched the Columbus Blue Jackets and Carolina Hurricanes both get eliminated from the NHL's restart earlier Wednesday on the same sheet of ice following separate Game 5 losses.

The Tampa Bay Lightning downed Columbus 5-4 in overtime, while the Boston Bruins beat the Carolina Hurricanes 2-1 to advance. Montreal was actually the only one of four teams on the brink to stay alive after the Colorado Avalanche thumped the Arizona Coyotes 7-1 to win that series 4-1 in the Edmonton bubble.

Philadelphia got a power play seven minutes into the third, but Price snagged Giroux's shot through a screen. Kevin Hayes then had a partial break, leading to a tripping call and Farabee's third that briefly drew the Flyers level before Suzuki responded to keep the Canadiens from going home.

"Every time we kind of gained momentum we got scored on right away," Voracek said. "During the regular season we usually carry that momentum into the next shift, today they absolutely killed us with that."

Montreal led 1-0 after the first period on the heels of getting shut out 1-0 in Sunday's Game 3 and 2-0 in Tuesday's Game 4, but suffered a big blow early in the second when Jesperi Kotkaniemi was assessed a five-minute major and a game misconduct for boarding on Philadelphia defenceman Travis Sanheim. The 20-year-old centre initially went to the penalty box but, after the referees reviewed the play, Kotkaniemi was booted from the game just 1:45 into the middle period.

Philadelphia made the Canadiens pay 50 seconds later when Voracek's shot struck the stick of Montreal blue-liner Ben Chiarot and beat Price for his third. The Flyers then took their first lead at 6:37 with eight seconds left on the same man advantage when Voracek's pass in front went off Chiarot's skate and slid over the goal line.

The Canadiens and their pop-gun offence looked to be in serious trouble, but Armia, who hit a crossbar moments earlier, scored his second of the night and third of the post-season from a sharp angle on Hart at 10:12 to tie things 2-2.

"We gave everything we've got every shift," Armia said of Montreal's offence coming to life. "I don't think there's any magic tricks." 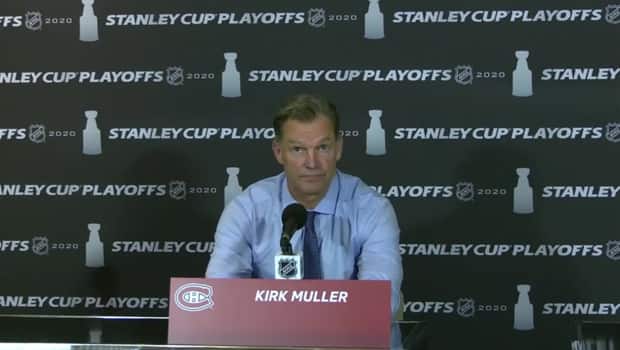 5 months agoVideo
8:32
Montreal Canadiens head coach Kirk Muller was highly complimentary of his players' efforts in a 5-3 win over the Philadelphia Flyers to stave off elimination. 8:32

After Gallagher made it 3-2, Suzuki beat Hart off the rush for a goal that looked to have made it 4-2 with 5:26 left in the period, but the sequence was correctly challenged for offside with Drouin into the offensive zone a step early.

Vigneault was about to give Hart the hook in favour of Brian Elliott for the second time in the series before the call was reversed.

The Canadiens, who hadn't scored since midway through the third period of their 5-0 victory in Game 2, got on the board at 2:56 of the opening period on a slick shorthanded sequence with Chiarot off in the box for crashing Hart's crease.

Montreal defenceman Xavier Ouellet grabbed the puck and faked like he was going to fire it around the boards in the Philadelphia zone. He instead blasted a shot off the yellow dasher behind Hart, and a hard-charging Armia was first to it before firing between the Philadelphia netminder's pads.

The 22-year-old Hart, who became the second-youngest goalie in NHL history to record consecutive playoff shutouts, saw his streak end at 122 minutes 53 seconds, while Montreal's goal drought was snapped at 132:18.

"This group is made up of some great character guys, great leaders," Muller said. "They want to keep playing."

They get another chance Friday.