Carey Price made 31 saves for his second shutout of the season and the Montreal Canadiens snapped the Calgary Flames' five-game winning streak with a 2-0 victory on Monday night.

The Calgary Flames were determined to build on a very emotional game their last time out. Instead, they came out flat.

The Flames saw their five-game winning streak come to an end with a 2-0 loss to the Montreal Canadiens on Monday night on Carey Price's 31-save shutout.

The defeat came two days after an intense 4-3 victory over the Edmonton Oilers.

"Not enough emotional attachment to this game," said interim Flames head coach Geoff Ward. "We got outbattled, outraced, outcompeted and outworked right from the opening face off. It took us a long time to start clawing our way back into the hockey game.

"This is part of learning how to win. When a game's over, it's over, and you have to move on to the next one."

The Canadiens came out firing to start the game, forcing David Rittich to make some big saves in the opening minutes. 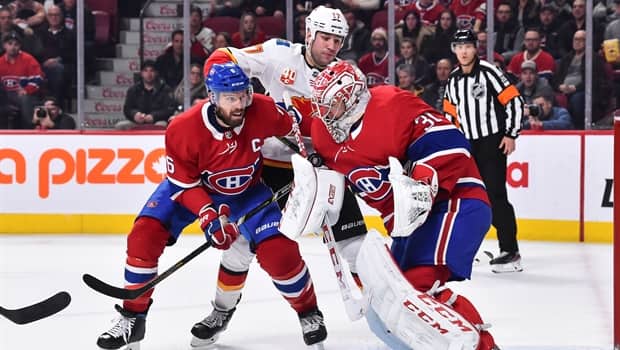 The pressure kept coming and shots were 13-2 when Montreal finally put a puck past the Flames goaltender at 13:30. Following a wraparound attempt from Jeff Petry, Jordan Weal spun and placed a no-look shot under Rittich's pad.

"Coaching staff brought it to our attention that we need to get to the net a little more," said Weal, who was a healthy scratch last game. "The puck popped out to me there. I was just trying to keep putting pucks on net because we were doing that earlier in the game, and it found a way in."

Price was not very busy through two periods but he made important stops when called upon.

He denied Matthew Tkachuk and Andrew Mangiapane on 2-on-1 rushes in the second. Price also made a pad save on Tobias Rieder's backhand midway through the frame before denying Johnny Gaudreau's wrist shot with the glove a few minutes later.

The Flames (25-18-5) were better in the third and outshot Montreal 15-5 but they could not solve the Canadiens goaltender.

"We got better as the game went on but they took it to us all night," said Gaudreau. "We just have to be better. We got a little fancy at times, turned the puck over sometimes at the blue line. It cost us."

Rookie Ryan Poehling gave Montreal (20-20-7) a two-goal cushion with his first point in 20 games this season. After a Canadiens face-off win in the offensive zone, the 21-year-old rookie drove to the net and waited for Rittich to go down before firing the puck over his pad at 9:45 of the third.

"A big relief for myself and it was perfect timing," said Poehling. "We had a one-goal game and it was big to extend that and give the guys a breather. Today in particular I had so many chances, so it was just a matter of time."

The Canadiens were coming off a 2-1 overtime victory in Ottawa on Saturday and have won two games in a row since losing eight straight.

"Obviously a momentum builder," said Price, who improved to 8-1-1 in his last 10 games against Calgary. "We just carried on from last game. Right until the end, guys were diving in front of pucks. That's what winning hockey is all about."

Price's second shutout of the season was also the 46th of his career, tying Ken Dryden for third most shutouts in franchise history.

"It's another pretty cool milestone," said Price. "Just looking forward to the next one."

The Canadiens have beaten Calgary in five straight contests.

Montreal's Brendan Gallagher missed his second straight game with headaches following a concussion. Defenceman Ben Chiarot was back after missing two games with a lower-body injury.