Defenceman Jeff Petry scored 25 seconds into overtime to give the Montreal Canadiens a 3-2 victory over the Anaheim Ducks on Thursday night.

There were big shoes to fill on the Canadiens blue line with the absence of injured captain Shea Weber. Jeff Petry answered the call.

Petry rounded off a solid defensive game by scoring the overtime winner to give the Montreal Canadiens a 3-2 victory over the Anaheim Ducks on Thursday night.

The blue-liner had a goal, an assist, two hits and a blocked shot in a game-high 27:25 of ice time. Weber, out with a lower-body injury, missed his first game of the season.

"When we don't have a choice, [Petry] has to step up," said Claude Julien. "He's the next one on the right side to take over those responsibilities. That's what he does. You just hope that he does that well and help us cushion the blow of Shea's absence."

In overtime, Petry carried the puck all the way from his own zone and beat goaltender John Gibson with a wrist shot, blocker side 25 seconds into the extra frame. Gibson stopped 24-of-27 shots in defeat.

"Obviously Shea being out, he's a big piece in this lineup," said Petry, who has 35 points this season. "I think it's our character in here, guys are going to step up and try to fill these roles and we just have to keep plugging away.

"A win's a win. Obviously we want to play the right way and there are things we need to clean up and do better, but at this point of the year and the situation we're in, we'll take any win any way we can get them."

WATCH | Petry does it himself in overtime: 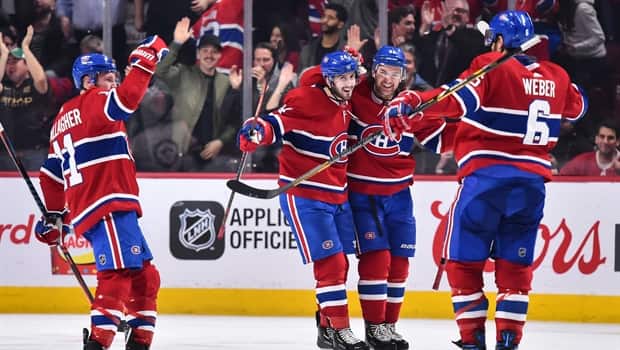 Petry is OT hero for Habs in win over Ducks

The Canadiens (26-23-7) have won six of their last eight and gained ground in the playoff race in the Eastern Conference. They are five points behind the third-place Florida Panthers in the Atlantic. Florida has three games in hand.

The Ducks (22-26-6) were down 2-1 in the third period when Derek Grant netted the equalizer at 2:16, a bouncing shot that snuck underneath Carey Price's right pad.

Battle of the backstops

The goalies then put on a show.

With Montreal on a power play, Gibson kept his team in the game with an incredible glove save on Joel Armia on the doorstep midway through the frame. That stop came seconds after Tomas Tatar rifled a shot off the post.

With two minutes on the clock, Price did the same when he stacked the pads and robbed Jakob Silfverberg of a sure goal to force overtime. Price made 35 saves and improved to 4-7-1 all-time against Anaheim.

"Carey Price was excellent right through the game," said Ducks coach Dallas Eakins. "Made a lot of saves. When the game's on the line like that, that's the guy [Silfverberg] we want to have the puck on his stick. But obviously a huge save there by Mr. Price."

With Nick Ritchie in the penalty box in the first, the Canadiens took advantage of the extra skater when Nick Suzuki used Brendan Gallagher as a screen to beat Gibson at 17:18 for his 11th of the year.

"I'm feeling pretty confident," said Suzuki, who ranks sixth among rookies for most goals scored this season. "Nice to get an early goal and settle into the game. Ask anybody, if they get a goal in the first period, they're feeling a lot better for the rest of the game."

The Canadiens were caught puck watching on Anaheim's equalizer at 9:53 of the second. Surrounded by four Montreal players in the slot, Silfverberg got his stick on Rickard Rakell's pass from behind the net and roofed a shot on Price.

Gallagher made it 2-1 for the home team with a five-hole goal from the slot at 13:16 on a pass from Ilya Kovalchuk that eluded three Ducks players. Gallagher has three goals in five games since returning from a head injury.