Blake Wheeler had a goal and assist to become the all-time leading scorer in franchise history, Connor Hellebuyck made 31 saves for his third shutout of the season, and the Winnipeg Jets beat the Minnesota Wild 6-0 on Saturday.

Blake Wheeler admits that returning home to play in Minnesota still feels special after a 12-year NHL career spent playing elsewhere, including the past nine seasons for the Wild's rival Winnipeg Jets.

With his mom and dad in attendance on Saturday afternoon, it was fitting that Wheeler became his franchise's all-time leading scorer with another big game in Minnesota.

Wheeler had a goal and assist, Connor Hellebuyck made 31 saves for his third shutout of the season, and Winnipeg beat Minnesota 6-0. Wheeler's 616 points surpassed the previous mark set by Ilya Kovalchuk, who played for the franchise when it was the Atlanta Thrashers.

"For a guy that works that hard every day, you deserve to have good things happen," Jets coach Paul Maurice said. "To become the all-time leader in a big game for us, but in his home state and to have his mom and dad here, that is fantastic for him and he's earned it."

WATCH | Wheeler and the Jets shutout the Wild: 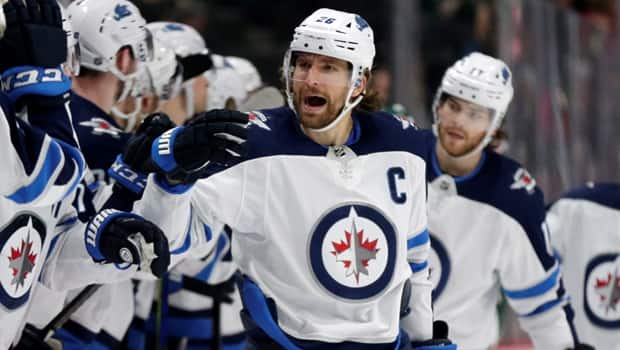 12 months agoVideo
1:57
Blake Wheeler had a goal and an assist in the Jets 6-0 win over the Wild, passing Ilya Kovalchuk for most points in franchise history with 616. 1:57

Patrick Laine had two goals for Winnipeg, which had lost three of their past four games. Mark Scheifele scored for the eighth time in nine games, and Nikolaj Ehlers and Logan Shaw also had goals.

Alex Stalock allowed six goals on 28 shots in goal for the Wild before being removed midway through third period. Devan Dubnyk finished with two saves for Minnesota, which has lost three of four.

The Wild were shut out for the third time this season a game after scoring a franchise record-tying eight goals in a win at Arizona on Thursday night.

"The teams that score a lot of goals one game they usually say, `Geez, I wish we would have saved some for the next game,"' Minnesota coach Bruce Boudreau said. "But I'm more worried about defending. We gave up five and then we gave up six. You can't win hockey games when your goals-against average is about 3.5. it's not going to work."

10 seasons with Thrashers and Jets

Wheeler, who's played 10 seasons for the franchise after starting with the team in its final season in Atlanta, opened the scoring with a short-handed goal, his 10th of the season. He set the record with an assist in the third on Laine's second goal.

"I really feel like the product of some good teams and I've played on some really good lines," Wheeler said. "I play a lot of minutes, so I just feel fortunate for the opportunities I've had here and the guys I get to play with every night. It's not going to be long before one of these guys on this team passes me and that will be a good moment too. But it's a reflection of taking advantage of your opportunities and playing with a lot of really good guys."

Winnipeg started the game with the league's worst penalty-kill, but capitalized even when down a man. Along with the short-handed goal, the second of the season for the Jets, Winnipeg had another opportunity in the second when it had three players in alone on Stalock.

Scheifele's goal was scored with six seconds left in the first to give Winnipeg a 2-0 lead.

"It's a poor feeling going into intermission when they score late," Stalock said. "Never could come back. They won the second period, we talked about just wanting to win the second, they won the second and obviously came out on the third and they kind of put their foot down."