On Jan. 2, DiPietro was less than a minute from leading Canada to a 1-0 quarter-final win over Finland at the world junior hockey championship in Vancouver when Nashville Predators prospect Eeli Tolvanen bounced a puck off Aleksi Heponniemi's leg and under DiPietro's arm to tie the game.

Then, in overtime, Toni Utunen scored his first goal of the season at any level, beating DiPietro with a shot that appeared to deflect off Canadian forward Cody Glass. Finland went on to defeat Switzerland in the semifinals and the United States in the gold-medal game. 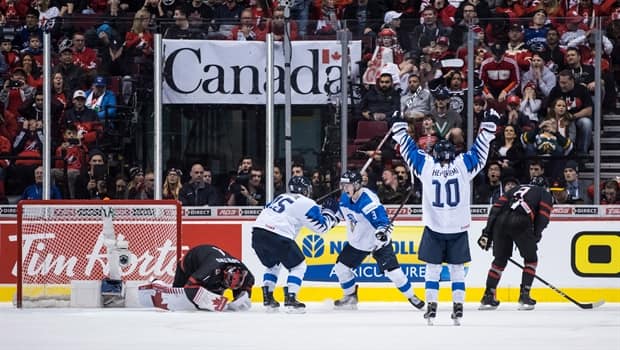 2 years agoVideo
2:23
After tying the game with 46 seconds left in the 3rd, Finland scored after Canada failed to convert on 2 game-ending opportunities in overtime, knocking the hosts out of the 2019 IIHF World Junior Championship in Vancouver. 2:23
"I think it's once-in-a-lifetime you see a goal like that on that kind of stage," DiPietro said of the tying goal in a recent interview from Ottawa, where he has played for the Ontario Hockey League-leading 67's since a Dec. 4 trade from Windsor. "It's disappointing the way the bounces happened. It's not something I want to relive."
However, the bad bounces for DiPietro at Rogers Arena did continue during his NHL debut for the Vancouver Canucks on Feb. 11 when he allowed three goals on the first five shots – including many of the redirected variety — in a 7-2 loss to the San Jose Sharks. At 19 years and 247 days, the native of Amherstburg, Ont., was the fifth-youngest goalie to start an NHL game.

The Canucks' 2017 third-round draft pick spoke to CBC Sports about the experience, moving forward from the world juniors and the improvements needed to better his chance for regular NHL employment.

CBC Sports: At 19, were you prepared to face an NHL team?

Mikey DiPietro: I think yes, in the way I handled myself mentally on the ice. I think I'm mature beyond my years in many aspects. On the physical side, I think I can compete and hold my own. The biggest adjustment was the speed [of the game] and how smart the NHL players are. I hadn't played for eight days so it was hard to find a rhythm.

There are a lot of areas in my game that can be improved, so I think the next time I get a chance it'll be a different result.

CBC Sports: Describe the feelings of realizing your NHL dream?

MD: You certainly don't dream about it the way it shook out for me. It was a phenomenal experience and it's going to make me a better person and a better goaltender.

I have faced a lot of adversity this year and through that you can figure out who you are and what you're made of. I got to play against the San Jose Sharks, who are most likely Stanley Cup contenders this year. I got to play against Jumbo Joe [Thornton]. I grew up watching him and it was cool to battle him. The teammates I had that game were phenomenal. They kept me engaged in the game.

CBC Sports: What tools did you use to reset mentally following a slow start?

MD: I just focused on the next puck and slowing the game down. I didn't want to show my frustration or disappointment, especially on a stage like that.

CBC Sports: What areas have you identified for improvement?

MD: [Be] better [handling] traffic, being able to pick up the release [of a shot] better or read off a tip [redirected puck] better. The mental side of the game is also important, dealing with the ups and downs of a hockey season and game, and managing those emotions.

CBC Sports: How often have you watched the replay of Finland's tying and winning goals?

MD: Three or four days after the tournament I watched and a couple of times since then. It still stings seeing those goals or hearing about those goals, but I can only control the present and I'm focusing on bettering my game. All in all, it was a positive experience.

CBC Sports: After the world junior quarter-final loss, you said you felt as though you had let your country down. Are your thoughts much different today?

MD: I still think when Canada doesn't win gold, you let the country down. Time heals but my words won't change. I hold myself to a high standard and I'm my own worst critic. Those pucks went by me, nobody else, so that's on me.

CBC Sports: Whose words have impacted you most since that tournament?

MD: The person's words that matter to me most are those I've heard since I started playing hockey from my dad [Vic]. He knows me better than I know myself. He's my best friend, but the bond we share is more than that.