The Toronto Maple Leafs have won a bidding war for much sought-after NHL head coach Mike Babcock, who leaves the Red Wings after 10 seasons. He won a Stanley Cup with Detroit in 2008. 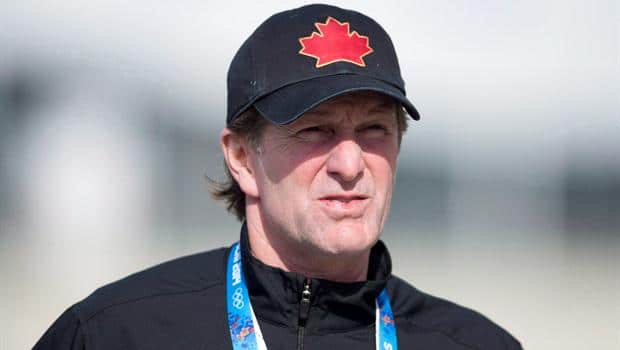 6 years ago
1:56
Sought after coach Mike Babcock appears to have landed in Toronto for 8 years and 50 million dollars. 1:56

The much sought-after NHL head coach has left the Detroit Red Wings to join the Toronto Maple Leafs, the latter team announced Wednesday.

Babcock reportedly received an eight-year deal worth about $50 million US, which at $6.25 million annually would make him the highest-paid coach in the league by a wide margin. Chicago's Joel Quenneville is believed to be the next highest paid at a reported $2.75 million.

The Leafs will introduce Babcock as the 30th head coach in franchise history on Thursday at 11 a.m. ET, but they also sent out a welcome message on their electronic billboard outside of Air Canada Centre on Wednesday.

Babcock reportedly also had contact with Philadelphia, San Jose, St. Louis and Buffalo over the past few weeks before deciding Wednesday on the Maple Leafs, who finished 27th in the 30-team NHL this past season.

Buffalo and Toronto were said to be in a bidding war for Babcock's services as late as Wednesday morning, with Sabres owner Terry Pegula believed to be offering $5 million annually in a $50-million package that included bonuses.

But the Leafs, backed by the deep pockets of parent company Maple Leaf Sports and Entertainment, made a successful last-ditch effort for Babcock, who guided Detroit to the Stanley Cup playoffs in each of his 10 seasons with the team, and is finishing a deal that paid him $2 million per year.

I couldn't justify going past five years.... We had bigger goals than [just] to make the playoffs.—Red Wings GM Ken Holland on Mike Babcock's reported 8-year deal with Maple Leafs

Red Wings general manager Ken Holland, who gave Babcock until May 25 to speak to other teams because he was still under contract until June 30, will receive compensation, expected to be a third-round draft pick within three years.

Holland told media in Detroit on Wednesday that his final offer to Babcock on Tuesday was a five-year term, one more year than he had presented his longtime employee last June and in January.

"I couldn't justify going past five years," he said. "We've only won one playoff round in four years. We had bigger goals than to make the playoffs, so to wake up two, three years from now, if we're not able to take this program to the next level, then everybody starts looking at options [elsewhere]."

Holland added that until the last "three or four days" he had an employee, friend and coach that had helped give the organization 10 great years. Now, he has a friend in Babcock.

"It's been 10 fabulous years, professionally and personally," said Holland. "We wish we had won more playoff series. We feel disappointed we weren't able to finish off the Tampa series [in the last round] when you're up 3-2 [in games]. It's emotional.

"We've worked hand in hand. At the end of the day, all good things come to an end. He's on to a new chapter in his life [and] professional career, and I've got some decisions to make here about who the next coach of the Detroit Red Wings is."

With a hint of a smile, Holland added: "Our goal is to beat Mike."

In 2006 and 2008, the Babcock-led Red Wings captured the Presidents' Trophy as the NHL's regular-season champion. He led Detroit to the Stanley Cup finals in just his third season with the team and won, and was named a finalist for the Jack Adams Award as coach of the year in 2008 and last season.

Maple Leafs president Brendan Shanahan scored 40 goals in his lone season playing under Babcock in Detroit during the 2005-06 campaign.

Babcock coached in Anaheim for two seasons before leaving for Detroit, leading the Ducks to their first Cup finals in his first season in 2003.

"When I hired Mike Babcock [in 2005] he had passion, he had a work ethic and he became a Red Wing," Holland said. "I believe [leaving the Red Wings] was a difficult decision for him, not only to choose to go to Toronto but also to choose to leave Detroit."

A Saskatoon native who was born in Manitouwadge, Ont., Babcock is the only coach to earn membership to hockey's so-called "triple gold club," prevailing at the 2010 Olympics and 2004 world championships along with his Cup victory. He also guided Canada to Olympic gold last year in Sochi, Russia.

"He expects a lot of himself and gets through things quickly," said Hitchcock, who served as an assistant on Babcock's Olympic staffs in 2010 and 2014. "He isn't afraid to make decisions and I love it because it's brief and to the point."

There will be plenty of decisions to make with a Maple Leafs outfit that finished this past season with a 30-44-8 record, going a horrific 9-28-5 under interim head coach Peter Horachek, who took over from the fired Randy Carlyle on Jan. 7, when Toronto was 21-16-3 and in a playoff spot.

Among the Leafs' forgettable moments:

A day after the Leafs dropped a 4-3 decision to Montreal in the season finale, Shanahan made sweeping changes, firing GM Dave Nonis, Horachek and assistant coaches Steve Spott, Chris Dennis and Rick St. Croix (goaltending) along with director of pro scouting Steve Kasper and director of player development Jim Hughes.

In mid-April, Shanahan said he would like to have a new GM in place by the June 26 NHL draft in Sunrise, Fla. That has yet to happen, so assistant GM Kyle Dubas and director of player personnel Mark Hunter continue to share GM responsibilities on an interim basis.

Shanahan also noted at that time he would prefer to have a GM in place before hiring a head coach but wasn't opposed to adding a bench boss first.