Canada advances to semis with dramatic OT win over Switzerland

Mark Stone scored in overtime to give Canada a dramatic 3-2 win over Switzerland in the quarter-finals at the world hockey championship in Kosice, Slovakia, on Thursday. Canada's Damon Severson tied it with 0.4 seconds left in regulation on a goal that was confirmed by video review.

Mark Stone scored in overtime to give Canada a dramatic 3-2 win over Switzerland in the quarter-finals at the world hockey championship on Thursday.

Canada's Damon Severson tied it with 0.4 seconds left in regulation on a goal that was confirmed by video review.

In the 3-on-3 overtime, Stone got a step on a Swiss defender and put a pass from Pierre-Luc Dubois behind goalie Leonardo Genoni to win it.

Canada will face the Czech Republic and Russia will meet Finland in the semifinals on Saturday. The final is Sunday.

Stone's seventh goal of the tournament came at 5:07 of the 10-minute period. If neither team scored, there would have been a shootout.

"In these elimination games, you need to have guys step up. [Severson] stepped up for us to get the game tied, and then Dubois makes a ridiculous play [in overtime] to get it finished for us," said Stone, who had two goals and one assist in the win. "[The overtime winner] was a pretty big goal, it sends us to the semifinals, but I didn't really have to do much. I just put my stick on the ice, went to the net and Dubois makes that winning goal happen." 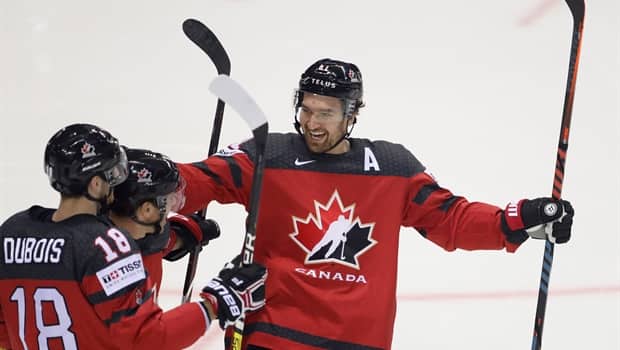 1 year ago
1:59
Canada tied the Swiss with 0.4 seconds remaining in the third before Mark Stone scored the winner in OT to give the Canadians a 3-2 win. 1:59

The tying goal came with Canada goalie Matt Murray pulled for an extra attacker, Severson's shot from the point dribbled over the goal line after it hit Genoni's pad and blocker. After a video review that lasted about five minutes, it was ruled a goal.

"It's one of those things that you can't really make it up, and we were very fortunate to get that late goal," Severson said. "It was a 2-1 hockey game the entire third period, and [the Swiss] goalie was playing great. We got a lot of chances but we just couldn't seem to sneak one by him. With under a second left I just took a shot and it ended up bouncing in. To score a goal like on a big stage like this is definitely very exciting."

Canada (7-1) has now won seven games in a row. Canada finished first in Pool A, while Switzerland (4-4) was fourth in Pool B.

"We had a really good first period, other than the first couple shifts," Canada coach Alain Vigneault said. (Switzerland's) goaltender played extremely well, and they got that goal at the end of the second period that gave them a 2-1 lead, which was a little unfortunate.

"It's a 60-minute game and in the third period we played our best hockey. We threw everything we could at the net and it took 19 minutes and 59 seconds to get the tying goal, but we worked hard and at the end of the day, I think we were the better team today."

Canada was playing without key forward Anthony Mantha, who received a one-game suspension for his hit to the head on American Colin White in the final game of the preliminary round. Mantha and Stone are tied for the Canada scoring lead with 12 points apiece.

Nico Hischier gave Switzerland a 2-1 lead with three seconds left in the second period. The first overall pick by the New Jersey Devils in the 2017 NHL draft, Hischier put a rebound past Murray with Switzerland on a power play.

Stone, a Vegas Golden Knights forward and a former Ottawa Senator, tied it at 1-1 when he tipped a Dante Fabbro shot past Genoni at 5:45 of the second period.

Sven Andrighetto cashed in on the power play to open the scoring for Switzerland with 1:54 left in the first.

Canada finished fourth last year after losing to Switzerland in the semifinals before dropping the bronze-medal game against the U.S.