Senators stick it to Crosby and Co. after ugly slash on Methot

Kyle Turris and Bobby Ryan scored in the shootout as the Ottawa Senators defeated the Pittsburgh Penguins 2-1 Thursday night in a game marred by a gruesome finger injury to Ottawa's Marc Methot. 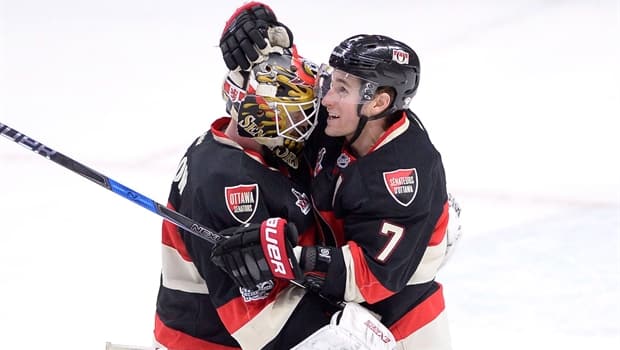 4 years agoVideo
1:39
Ottawa's 2-1 shootout win moves them to within a point of the 1st place Montreal Canadiens in the Atlantic Division 1:39

The Ottawa Senators got a big win Thursday, but suffered a big loss at the same time.

Kyle Turris and Bobby Ryan scored in the shootout as the Ottawa Senators defeated the Pittsburgh Penguins 2-1 Thursday night.

They appear to have lost defenceman Marc Methot for perhaps an extended period of time, though, after he took a slash from Sidney Crosby in the first period.

Ottawa played the final 45 minutes without Methot, who left the game with a bloodied and mangled finger on his left hand following a two-handed slash from Crosby. Crosby didn't receive a penalty on the play.

Methot grabbed Crosby by the jersey after the whistle and had a few words for the Penguins' captain before leaving the ice. 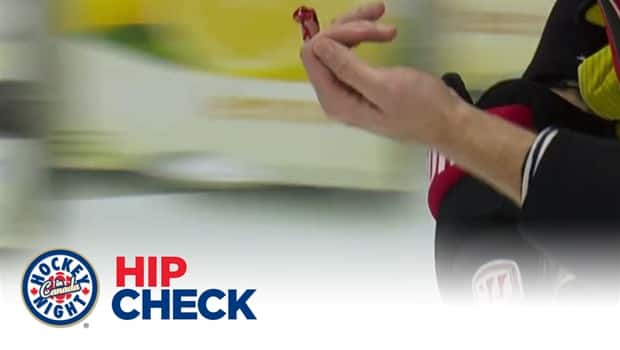 "His finger is destroyed. It's shattered and he's out for weeks," Senators coach Guy Boucher said.

Ottawa captain Erik Karlsson said it was an unfortunate play, but a play that happens all the time. This one just went bad.

"[Crosby] puts his stick in as [Methot] is trying to shoot the puck in and unfortunately it hits his finger," Karlsson said. "It turns out worse than most other times, plays like that happen all the time, but I don't think it was intentional or dirty."

No intent to injure

"I was just trying to get his stick and I think I caught his finger judging by his reaction and their reaction. I've gotten those before. They don't feel good."

Mike Hoffman found the back of the net in regulation for the Senators (41-24-8), while Mike Condon made 34 saves, including two incredible point blank stops in overtime to keep the game going.

"I was lucky to get it on the blocker there and thankfully it went over the net," Condon said of his overtime save off Chris Kunitz.

Nick Bonino had the goal in regulation for the Penguins (46-17-10), who got a 29-save performance from Matt Murray.

After being outplayed for much of the first two periods, the Senators were much better in the third and tied the game 1-1 on the power play at 9:43 as Hoffman beat Murray over the shoulder with a wrist shot just 14 seconds after Matt Cullen was penalized for holding.

"I couldn't really see it until late and by that time, he's got such a good shot it was already too late for me to react to it. But I've got to have that short side, so that's probably on me," Murray said.