John Tavares scored the winner on a power play in the third period as the Toronto Maple Leafs defeated the Edmonton Oilers 4-2 on Friday.

The Maple Leafs needed all hands on deck without two-thirds of their top line.

Minus both Auston Matthews and Joe Thornton, Toronto didn't miss a beat Friday.

John Tavares scored the winner on a third-period power play and Frederik Andersen was stellar in making 30 saves as the Leafs picked up a 4-2 victory over the Edmonton Oilers.

Adam Brooks, with his first in the NHL, Jimmy Vesey, and Mitch Marner, into an empty net, had the other goals for Toronto (4-2-0), which went 2 for 2 with the man advantage. William Nylander added a pair of assists, while Marner chipped in with one of his own.

"A great effort by the group," said Vesey, whose team lost 3-1 to the Oilers on Wednesday. "No Auston, no [Thornton]. Guys came in and stepped up.

"It was a gutsy effort. We didn't like our game the other night. It was good we didn't have to wait to play those guys again." 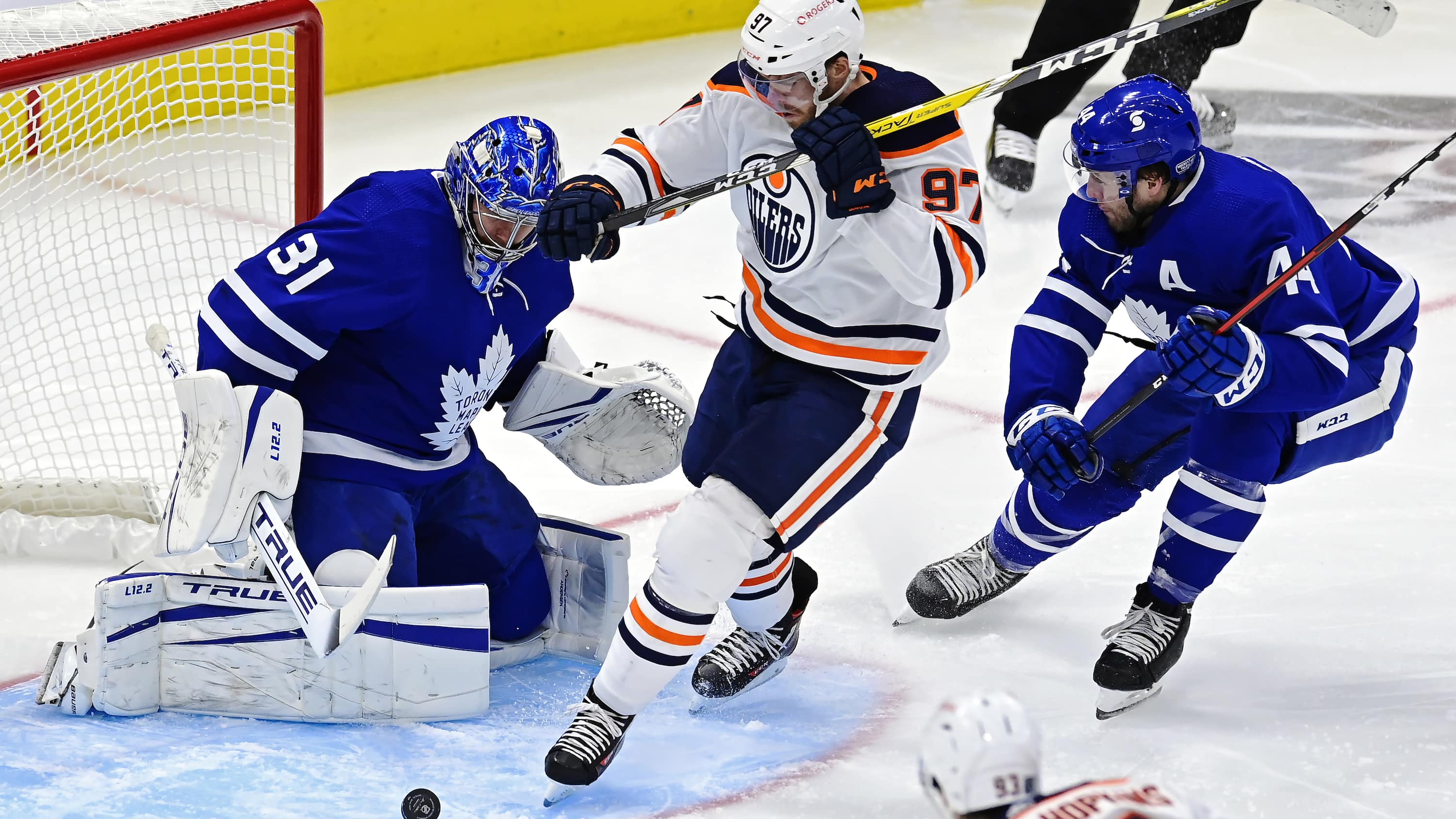 1 month agoVideo
1:02
John Tavares' power-play goal in the 3rd period was the game-winner in Toronto's 4-2 victory over Edmonton. 1:02

Leafs head coach Sheldon Keefe said before the game Matthews is day-to-day with upper-body soreness, while Thornton will miss at least four weeks after fracturing a rib.

"We've got to play a little bit differently," Keefe said. "The group's really got to recognize the importance of every shift and how important it is to stay with the structure, stay with the plan. I thought we did that really well."

Connor McDavid and Leon Draisaitl replied for Edmonton (2-4-0), which got 25 stops from Mikko Koskinen.

"A good offensive team, you give them a little sniff, they're going to figure it out," McDavid said. "We made one too many mistakes."

Down 2-1 through two periods, the Oilers got even 50 seconds into the third when McDavid, who grew up just north of Toronto in Newmarket, Ont., scored his second-ever goal at Scotiabank Arena when he deftly tipped Ethan Bear's point shot past Andersen for his fourth of the campaign.

The Leafs got a power play midway through the period when Toronto's new top line of Tavares, Marner and Zach Hyman started buzzing, with the latter forcing Koskinen to stretch for a great save.

But the Edmonton goalie could do nothing on the Tavares winner — his fourth overall and second in as many games — at 11:46 on a redirection of Marner's shots after making another terrific stop on Toronto's captain moments earlier.

Andersen shut the door from there before Marner iced it with his fourth into an empty net as Toronto held on for its fourth victory in six outings to open the abbreviated 56-game schedule.

"To get a good, hard-fought win like that you need the whole group," Tavares said. "We got a good bounce-back."

Most of the talk heading into the Leafs-Oilers showdown was about two offensive juggernauts, but there was very little room at 5 on 5 with all that star power mostly neutralized.

"You get very familiar with your opponent, tendencies, adjustments that are being made game to game," said Tavares of a season featuring division-only play. "Things might be a little tighter than people expected.

"There's a lot of respect on both sides knowing the capabilities."

Andersen, who recorded his 139th victory with Toronto to pass Curtis Joseph for fourth in franchise history, said it was a good sign the Leafs managed to limit McDavid and Draisaitl's chances over the two games.

With the Leafs missing Matthews and Thornton, Keefe went back to 12 forwards and six defenceman after dressing an extra blue-liner the last two games. Brooks, Pierre Engvall and Alexander Barabanov drew in up front, while Mikko Lehtonen was scratched on the back end.

The Leafs got a power play early in the second, but Oilers grabbed a 1-0 lead at 5:12 when Kailer Yamamoto threw the puck in front where Draisaitl fished it out of Nylander's skates and jammed home his second of the season.

But Toronto got that one back on the same man advantage 43 seconds later when Jason Spezza fired a puck into the slot that glanced off Brooks and in for the Winnipeg native's first NHL goal in his eighth appearance.

"That was the first game I've played in like 330 days or something like that, so it's been a long time," said the 24-year-old, who was part of Toronto's taxi squad before Friday. "It's nice to get that bounce, and nice for it to come from a guy like Jason Spezza.

Andersen then made a good stop outwaiting Jesse Puljujarvi on a break before Toronto pushed in front at 11:16 when Alexander Kerfoot intercepted an Adam Larsson pass behind Edmonton's net and quickly fed Nylander, who in turn patiently found Vesey to bury his second.

Friday's opening 20 minutes weren't nearly as tight-checking as Wednesday's chess match, with a couple of chances at either end. Yamamoto, who was credited with the opening goal two nights earlier after the Leafs flubbed the puck into their own net, forced a good stop out of Andersen less than 30 seconds in.

Leafs winger Wayne Simmonds then had an opportunity denied by Koskinen from the slot. Edmonton's Zack Kassian took a pass off the rush from McDavid that Andersen just got a piece of with the shaft of his stick.

McDavid had another rebound effort denied by Andersen before Simmonds saw his redirection smothered by Koskinen.

"Our best guys led us," Keefe said. "Just a real good team win — which we knew going in it was going to have to be."