Cam Talbot made 34 saves as the Edmonton Oilers officially qualified for the playoffs for the first time since the 2005-2006 season with a 2-1 victory over the Los Angeles Kings on Tuesday.

Edmonton has won 7 of its last 8 games 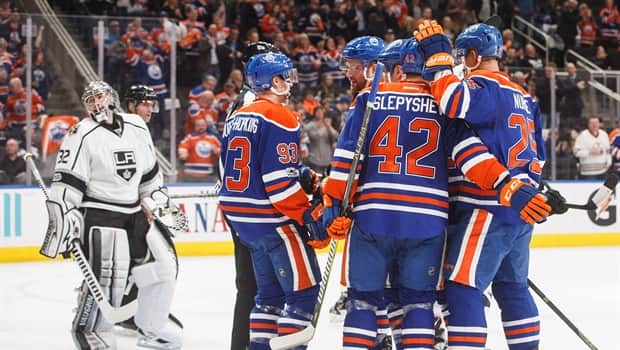 There will finally be playoff hockey again in Edmonton.

Cam Talbot made 34 saves as the Oilers officially qualified for the playoffs for the first time since the 2005-2006 season with a 2-1 victory over the Los Angeles Kings on Tuesday.

"It's a special feeling tonight, especially seeing how passionate the crowd was and how excited they were," said Edmonton forward Ryan Nugent-Hopkins. "We've had some tough years, but it's all worth it right now."

Connor McDavid and Eric Gryba scored for the Oilers (42-25-9), who have won seven of their last eight games.

"It's definitely special, you saw the excitement in the building," McDavid said. "The fans are excited, we're excited. There is a lot of work left to be done still, though."

Talbot agreed that the Oilers can't celebrate as if simply making it into the playoffs is enough.

"We still have a lot of work to do," he said. "That is just a checkmark next to our name. It is nice that we know we are going to be playing for it, but we have another race, and that is for first place in the division."

Jarome Iginla replied for the Kings (35-33-7), who have lost four of their last five and whose playoff hopes are hanging on by a thread.

"At this time of year you want to be locking up playoff spots and getting ready for a big push," said Kings assistant captain Jeff Carter. "A little different, but we'll play right to the end."

"It sucks for all of us," said L.A. defenceman Drew Doughty, before the game. "We don't want to be in this position. You can point your fingers at a bunch of games throughout the season that put us in this predicament."

The Oilers looked to have scored just 49 seconds in on an Oscar Klefbom backhander, but the goal was called back on goaltender interference.

McDavid's pass hit the stick of defender Derek Forbort and deflected past Kings goalie Jonathan Quick as the Oilers made up for that decision with five minutes left in the opening frame. It was McDavid's 27th goal of the season and league-leading 89th point, extending point streaks for himself and Leon Draisaitl to eight games apiece.

The Kings responded with three minutes remaining in the first as Iginla picked off a soft attempt to advance the puck by Edmonton goalie Cam Talbot and beat him high to the glove side.

Edmonton regained the lead seven minutes into the second period as a Gryba point shot caromed off a pair of Kings players before inching past Quick and into the net.

The Oilers had what looked like another sure goal by Zack Kassian called back because the whistle had gone due to an upcoming penalty to the Kings.

The King return to the ice on Wednesday with a trip to Calgary to face the Flames, while the Oilers next host the San Jose Sharks on Thursday.