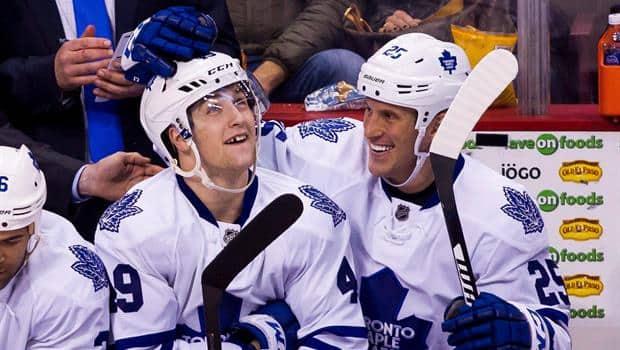 Brendan Leipsic knew he would be playing on one coast or the other Saturday night.

He's glad he got the call to go west.

The rookie forward scored his first NHL goal in his first game as the Toronto Maple Leafs defeated the Vancouver Canucks 5-2.

"It feels amazing," he said. "You work hard all your life to get to this point."

Leipsic was getting ready to travel with the Toronto Marlies of the American Hockey League to St. John's for a weekend set with the IceCaps in Newfoundland when the injury-depleted Leafs informed him he was needed in Vancouver.

"I was kind of in limbo, not sure if I was going to get the call this way," said the 21-year-old. "It was one end of Canada or the other. I'm happy it was this one."

Leipsic's parents, Kathleen and Greg, were in attendance, having travelled from Winnipeg via Minnesota and Seattle.

"They found a way. It was kind of planes, trains and automobiles to get here," Leipsic said of his parents travels. "Definitely a real special day."

As is custom in the league these days, the Leafs let Leipsic lead them out for warmups, but made the Winnipeg native do a couple solo laps before joining him on the ice.

"I expected that," said Leipsic, who was acquired in a trade with Nashville last season. "I had a lot of fun with it. That's all about your first-game experience. You only get one first game."

Mark Arcobello added his first two goals of the season 17 seconds apart and James Reimer made 17 stops for Toronto (20-25-9), which entered play last in the overall standings and won in regulation for just the second time since Jan. 6.

Jake Gardiner chipped in with two assists, while Brad Boyes and Leo Komarov added empty netters in the final minute.

The Maple Leafs, who came in on a three-game slide and were just 3-10-2 over their last 15, stunned the hockey world by trading captain Dion Phaneuf to Ottawa earlier this week, and iced a lineup that included a number of youngsters and minor leaguers.

"We've worked real hard on the trip, could have had better success than we had, but tonight we were rewarded," said Toronto head coach Mike Babcock, whose team had been outscored 15-6 over its last three games. "We did a good job of getting on top of them."

Daniel Sedin and Sven Baertschi scored for Vancouver (22-21-12), which had won two in a row to get back in the Western Conference playoff race after dropping four straight. Ryan Miller made 33 saves.

"We did everything that teams do to lose games," said Canucks captain Henrik Sedin. "Execution, smartness, timely goals ... we did everything wrong in a game we must win."

Up 2-1 and leading 31-13 on the shot clock after two periods, Toronto stretched its advantage to two at 3:54 of the third when Leipsic batted a puck out of midair in front of a helpless Miller.