Energized by a raucous home crowd that vehemently booed and serenaded former captain John Tavares in his first time back as a visiting player, the New York Islanders steamrolled the Toronto Maple Leafs.

"They were good the entire game," Cizikas said of the fans. "I thought they got us going. They played their role and they did an unbelievable job and we fed off it from the start."

Jordan Eberle and Cal Clutterbuck each had two assists, and Robin Lehner stopped 34 shots as New York moved two points ahead of Washington atop the Metropolitan Division one night before hosting the Capitals. The Islanders' 81 points are one more than they had all of last season.

Islanders fans, vocal on social media about their lingering displeasure with Tavares' departure after he repeatedly said he wanted to stay, booed loudly when Tavares and the Maple Leafs hit the ice for pregame warmups, and when they came back out for the start of each period. 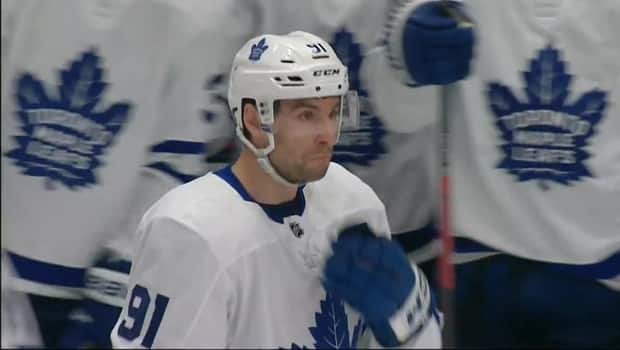 2 years ago
2:05
There was no love lost for John Tavares during his first game back on Long Island as a member of the Maple Leafs. 2:05

They also serenaded him with choruses of "We Don't Need You!" and other derisive chants throughout the game, including around a video tribute midway through the first period.

"We expected a little bit of that just because you see on social media what the fans were planning on doing," the Islanders' Mathew Barzal said. "I didn't think it was going to be like that. .... It was something I've never played in before."

The face of the franchise for nine years after he was selected No. 1 overall by New York in 2009, Tavares insisted he agonized over his decision to leave before announcing it on July 1, the first day of free agency.

"They always made it tough on the opponent when I played here," Tavares said. "They have their feelings and that's out of my control."

“It’s your bedtime” and “where’s your jammies?” chants. Islanders fans are savage <a href="https://twitter.com/hashtag/Tavares?src=hash&amp;ref_src=twsrc%5Etfw">#Tavares</a>

"We started really well, then we got impatient and turned the puck over," Maple Leafs coach Mike Babcock said. "We're fortunate we have 19 games left. You do this in the playoffs, you lose. You're done right away."

Cizikas got his second of the night for his 19th of the season and seventh in the last eight games, tipping the puck past Sparks 33 seconds into the third to push the Islanders' lead to 5-1. 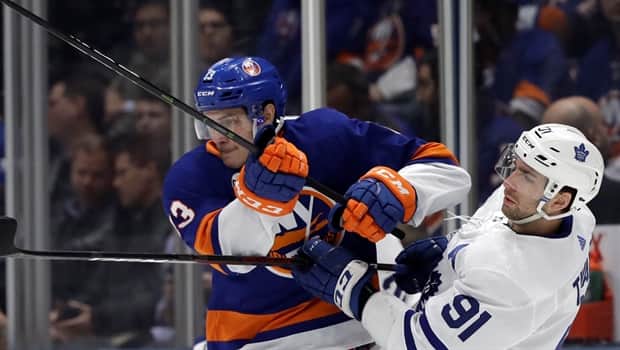 Game Wrap: No love for Tavares as Islanders crush Leafs

2 years ago
2:06
New York hammered Toronto 6-1, while the crowd rained boos on John Tavares in his return to Long Island. 2:06

Nelson got a pass from Eberle got his 20th at 8:41 for New York's sixth straight goal after trailing 1-0 in the first.

"We got back to our game, we played a full 60 [minutes] tonight," Lee said. "We obviously needed a game like this and we all showed up tonight and put forth our best effort."

Lee gave the Islanders a 2-1 lead 4:49 into the second with his team-leading 22nd goal on a 2-on-1 rush with Nelson. It was Lee's fourth goal in six games.

Hyman appeared to tie it with his second of the night at 7:12 off a pass from Mitch Marner. However the goal was overturned after the Islanders challenged for offside on the play, drawing a rousing ovation from the crowd.

"Sometimes it almost feels like you almost scored," Lee said. "The crowd gets into it after that and we were able to respond."

Cizikas extended the Islanders' lead to 3-1 with a short-handed goal as he stole the puck from Tyler Ennis along the side boards, skated up the right side, cut across the front of the goal and beat Sparks through the five-hole with 6:20 left in the middle period.

2 years ago
1:57
The Lightning are putting up video game-like numbers, and Rob Pizzo goes into his Nintendo game collection to prove it. ID: 1:57​​

Filppula made it a three-goal lead as he put in a loose puck in front for his 13th with exactly a minute left in the second.

Hyman put the Maple Leafs ahead 1-0, poking a loose puck in front off a deflection by Marner past Lehner for his 14th with 6:27 left in the first. Hyman has four goals and five points in his last six games.

Beauvillier tied it less than 3 minutes later, firing a return pass from Josh Bailey on a 3-on-1 rush for his 15th.