Tyler Bozak scored three times in the third period and the Toronto Maple Leafs broke loose for four goals in the final 20 minutes to beat the Colorado Avalanche 7-4 on Monday night. 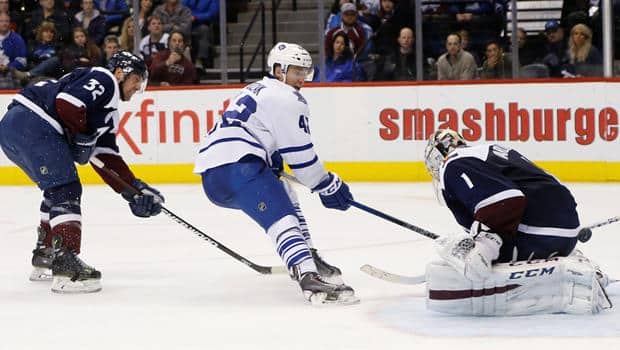 Tyler Bozak made a triumphant return to Denver and led the surging Toronto Maple Leafs to a big win.

Bozak scored three times in the third period and Toronto broke loose for four goals in the final 20 minutes to beat the Colorado Avalanche 7-4 on Monday night.

We were tied going into the third and whenever you are on the road and go into the third tied, it's not bad. We got some good plays and some lucky bounces.- Tyler Bozak after leading the Maple Leafs to victory with a hat trick

Bozak played two seasons for the University of Denver before signing with the Maple Leafs in 2009. He had three goals in eight previous games against Colorado and doubled that total in less than 16 minutes of the third period.

"We were tied going into the third and whenever you are on the road and go into the third tied, it's not bad," Bozak said. "We got some good plays and some lucky bounces."

Bozak got his first goal when he joined a 2-on-1 rush with van Riemsdyk. Bozak took a pass from van Riemsdyk, and goalie Semyon Varlamov made the initial save but the puck trickled through his legs and over the line 49 seconds into the period.

Bozak scored on a breakaway at 6:47 to put Toronto ahead 5-3, and van Riemsdyk finished the flurry with his 11th at 10:40. Bozak finished his second career hat trick with an empty-net goal at 16:20.

The Avalanche crowd didn't throw the customary hats on the ice for Bozak, who played college hockey for the Pioneers just a few miles up the road.

"I had a couple buddies here so I thought they might have thrown it out there, but that's OK," he said. "They might not have been close enough to the ice. I didn't expect hats there."

Defenceman Jake Gardiner had four assists for the Maple Leafs, who are 4-0-2 in their last six games.

Avalanche coach Patrick Roy said Varlamov looked "tired," but he didn't pull him because backup Reto Berra hurt his ankle playing soccer before the game. Berra was scheduled for an MRI on Tuesday.

Toronto's power play is converting at 14.6 per cent against the rest of the NHL but 87.5 per cent versus Colorado this season. The Maple Leafs went 4-for-5 with the man advantage when the teams met Nov. 17 and they built on that Monday.

Colorado tied it 1:07 into the second when Mitchell scored on a backhander in front of Jonathan Bernier, but Komarov's second goal of the game and 15th of the season — and Toronto's third power-play goal of the night — made it 3-2.