The Maple Leafs scratched Kasperi Kapanen for Saturday night's game against Ottawa after the speedy winger showed up late for the previous day's practice. He didn't take part in warmups and watched Toronto's 2-1 overtime win from the press box.

Now it's up to him to respond.

Toronto scratched the speedy winger for Saturday night's game against the Ottawa Senators after Kapanen showed up late for the previous day's 12 p.m. ET practice.

He didn't take part in warmups and watched the Leafs' 2-1 overtime victory from the press box.

"They felt like sitting me out was something I deserved, and I agree," the 23-year-old said following Monday's morning skate. "I've just got to take responsibility for that."

Kapanen was set to return to the lineup Monday against the Florida Panthers in a key matchup in the Atlantic Division playoff race.

Leafs head coach Sheldon Keefe was vague in his explanation for the benching following Saturday's win — he referenced "internal accountability" — but said Monday that the player wanted a chance to speak.

"I just overslept," said Kapanen, who got a little testy in his exchange with reporters. "I don't want my teammates to think that I'm not serious about this.

The son of former NHLer Sami Kapanen did, however, add that this isn't the first time he's been late or missed practice during his time with the organization, citing similar incidents in the minors with the Toronto Marlies of the American Hockey League.

"That's something that I've been trying to work on," Kapanen said. "It's just honest mistake, and it happens. I've got to own up to it."

Keefe, who coached Kapanen in the AHL, didn't recall the Finn being late or missing a practice when both were with the Marlies. But he acknowledged this type of behaviour has happened during Kapanen's tenure with the Leafs.

"It's all to do with here," said Keefe, who replaced Mike Babcock as head coach on Nov. 20. "Both previous to my time coming and since arriving." 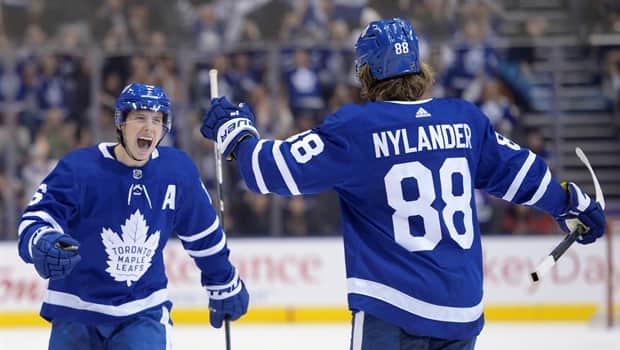 1 year ago
1:33
Mitch Marner ripped home a power-play goal in overtime as the Toronto Maple Leafs beat the Ottawa Senators 2-1. 1:33

He added it's a balancing act for him when it comes to discipline.

"I think we're pretty forgiving place," Keefe said. "You've got to be sympathetic to what the situation might be. Sometimes just innocent things happen, particularly in a city like this where you can get caught up in a hurry."

Kapanen, who signed a three-year, $9.6-million US contract extension with Toronto in June, has 10 goals and 28 points in 51 games this season. Acquired in the Phil Kessel trade with Pittsburgh in 2015, the 22nd pick at the 2014 NHL draft has 38 goals and 82 points in 184 regular-season contests to go along with five points (one goal, four assists) in 20 playoff outings.

This Leafs' management group, led by team president Brendan Shanahan, followed a similar route with Nazem Kadri in March 2015 after the then-24-year-old centre arrived late for a team meeting. He was suspended three games by the club, but eventually got back in its good graces and flourished with back-to-back 32-goal seasons in 2016-17 and 2017-18 before this summer's trade to the Colorado Avalanche.

"Kappy owned up to his mistake and I think he feels bad about it," Leafs captain John Tavares said. "He's a big part of this team and we count on him for a lot.

"We understand that there's a standard that we want to carry and the way we want to conduct ourselves. It's an attention to detail we need in all areas to keep getting better, and we need to do to keep things moving ahead. No one's perfect. We support Kappy. It was an honest mistake."

Kapanen's name had been mentioned in trade rumours before this incident came to light, but he didn't want to discuss what his tardiness could mean in relation to his standing with the organization.

"It's always going to be there," he said of chatter ahead of the Feb. 24 trade deadline. "It's no surprise so I don't really read into that stuff. I'm just focusing on the guys here."

The message has been sent. Keefe hopes it was received.

"Any time you get called out like that and held accountable, it gives you an opportunity to reflect and grow," said the coach. "That's really what we're looking for.

"This is not punishment or anything like that. It's just about trying and reset the player and try to help him grow and get better. We want him to be the player that he's capable of being."

Despite positive results from an MRI on his left knee, Florida captain Aleksander Barkov will not play in Toronto, head coach Joel Quenneville told reporters.

The 24-year-old centre was injured in Saturday's 4-0 loss at Montreal after taking a hit from behind from Canadiens defenceman Shea Weber in the second period.

Barkov is second in team scoring this season with 54 points in 49 games.

The 28-17-5 Panthers enter Monday's contest two points back of the Maple Leafs for third in the Atlantic Division with two games in hand. They're also two points behind Carolina for the second wild-card playoff spot in the Eastern Conference.