In the aftermath of a stunning ouster in the first round of the Stanley Cup playoffs, Tampa Bay Lightning head coach Jon Cooper said his team lost the momentum built during the regular season and never recovered.

In the aftermath of a stunning ouster in the first round of the Stanley Cup playoffs, Tampa Bay Lightning head coach Jon Cooper said his team lost the momentum built during the regular season and never recovered.

When the season ended April 6, the Lightning had 62 wins, tied for most-ever in NHL history. On Tuesday night, the Lightning were out of the playoffs, outscored 19-8 by the Columbus Blue Jackets in a sweep of the Eastern Conference quarter-final.

"When you have the amount of points we had, it's a blessing and a curse, in a way. You don't play any meaningful hockey for a long time. Then all of a sudden, you have to ramp it up. It's not an excuse. It's reality," Cooper said after Game 4. "That's how it goes. You have a historic regular season, and we had a historic playoff."

Presidents' Trophy winners to lose in 1st round:

The Lightning had 128 points on the season, but when the horn sounded Tuesday to end Game 4 in a 7-3 defeat, none of that mattered. They became the first squad to lead the NHL in points and not win a game in a seven-game, opening-round series.

"If we had the answers, we would have found a way to win a game. It sucks," Tampa Bay captain Steven Stamkos said. 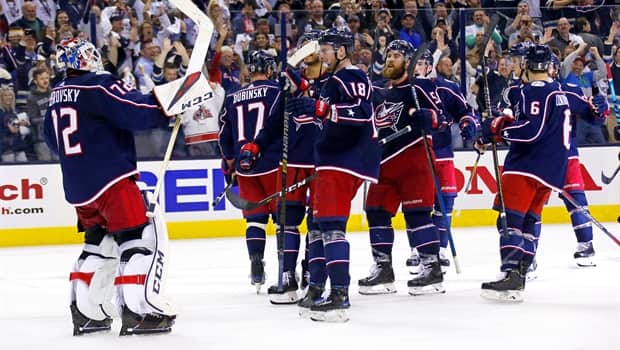 2 years ago
1:56
Columbus wins 7-3 for their 1st every playoff series victory. Tampa Bay is swept after tying an NHL record with 62 wins in regular season. 1:56

The Lightning never found an answer for Blue Jackets goalie Sergei Bobrovsky, who had a .932 save percentage. Tampa's goalie, Andrei Vasilevskiy had a .856 save percentage and 3.82 goals-against average in the series.

In the regular season, Vasilevskiy posted a .925 save percentage and 2.40 GAA.

The Lightning also converted just one of six power-play chances, and the Blue Jackets went 5-for-10.

"We couldn't find our game. It's that clear. For six days in April, we couldn't find it," Cooper said. "It's unfortunate because it puts a blemish on what was one helluva regular season."