New York Islanders defenceman Johnny Boychuk is expected to make a full recovery after receiving a skate near his eye during Tuesday's game against the Montreal Canadiens.

GM Lamoriello says defenceman has no damage to eye

New York Islanders defenceman Johnny Boychuk needed 90 stitches to his eyelid after being hit in the face with a skate but suffered no damage to his eye, president and general manager Lou Lamoriello said Wednesday.

Boychuk was cut Tuesday night when he was hit by Artturi Lehkonen's skate as the Montreal Canadiens left wing fell forward.

"Johnny Boychuk is OK. There's been no damage to his eye," Lamoriello told reporters. "He felt the skate blade get his eye, but fortunately, it just got the eyelid. It took 90 stitches to fix; a plastic surgeon took care of it. I don't want to exaggerate with the stitches because they do very small stitches, but there were 90 of them." 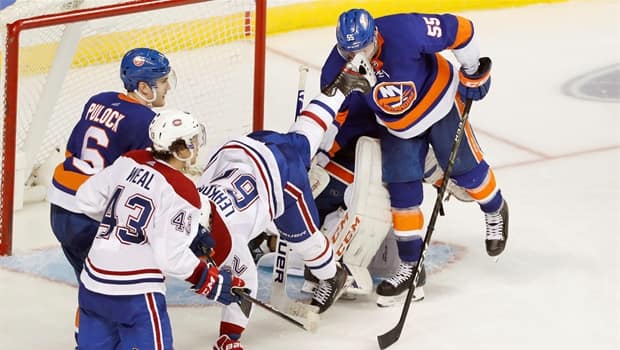 Isles' Johnny Boychuk hit in the face by skate

9 months agoVideo
0:49
Islanders defenceman Johnny Boychuk is cut when he is hit in the face by the skate of Montreal's Artturi Lehkonen. 0:49

Boychuk thanked well-wishers on Twitter on Wednesday, and joked about taking so long to personally update people on his phone.

Thank you to everyone for the positive messages and thoughts! I am extremely grateful. Please know they did not go unheard. Luckily for me the skate only cut my eyelid. Sorry for the late response...facial recognition wasn’t working... thank you again my friends. Johnny B

Both players were in front of the Islanders' net during the third period when Lehkonen fell, causing his legs to go into the air and his right skate to connect with Boychuk under the visor. Boychuk was down on the ice briefly before he got up and skated off the ice with his hand covering his face.

"He'll be fine," Lamoriello said. "It's just a matter of time with the eye opening up and him feeling good."

There is no timetable on his return.

Boychuk previously took a skate to the neck in a Feb. 28 game against the Toronto Maple Leafs last season. He returned later that game.