Hall of Fame goaltender Johnny Bower, who guided the Toronto Maple Leafs to four Stanley Cup titles in the 1960s, died after a short battle with pneumonia on Tuesday, according to a statement from his family. He was 93.

The 93-year-old was battling pneumonia, according to a statement from his family.

Remembered by many for his brave play on the ice and his gracious demeanour off it, Bower got his start in the National Hockey League at an age when many players would be considering retirement.

Becoming a professional athlete at 35 is practically unheard of, but it serves as a testament to the hard work and perseverance that "No. 1" demonstrated throughout his life.

A legend in the making

The Toronto Maple Leafs legend, Hockey Hall of Famer and two-time Vezina Trophy winner toiled in the American Hockey League for 13 seasons before earning a permanent spot in 1958 as the Leafs' goaltender.

Originally named John Kiszkan, he was born the only boy of nine children on Nov. 8, 1924, and came of age in Prince Albert, Sask., during the Great Depression.

He was self taught, playing in pickup games on ponds using a crooked tree branch as a stick and old mattresses as makeshift goalie pads.

"When I was a little guy we had nothing at all," Bower once said. "But the ambition that I had as a kid was to play hockey as long as I could because it was always my dream to have my name engraved on the Stanley Cup."

When the Second World War broke out, Bower demonstrated a self sacrifice that would carry through the rest of his life. Though just 15, he lied about his age to enlist and was sent to serve in England, where he would spend the next four years.

He was discharged in 1944 because of rheumatoid arthritis and returned to Prince Albert to pick up his hockey dream, beginning his career with the Blackhawks of the Saskatchewan Junior Hockey League.

It didn't take long for Bower to catch the attention of scouts from the American Hockey League, and in 1945 the Cleveland Barons offered the 21-year-old his first professional contract.

I just can't explain the feelings of winning the Cup that you have inside you. You're like, 'Oh my gosh, I finally did it after all these years.'- Johnny Bower

He spent eight years in the AHL, regularly winning more games than he lost, but jobs in the NHL were hard to come by.

"There were only six goalies in the NHL at the time. I couldn't beat them; at least I thought I couldn't. I still didn't give up. I just kept working," Bower said.

In 1953 he got his shot, joining the New York Rangers and playing all 70 games. However, the following season he was displaced by Lorne (Gump) Worsley and spent most of the next five years in the minors.

Undaunted, Bower continued to work toward his Stanley Cup goal with extraordinary play in the AHL, where he still holds the record for most shutouts at 45 and most wins with 359 in 592 games.

"They nicknamed him China Wall down there because no one could get by him," former teammate Frank Mahovlich said in a television interview.

In the summer of 1958, the Toronto Maple Leafs claimed Bower in the intra-league draft, hoping he could shore up a weak team while they developed their younger players who would eventually form the core of a championship team.

"Here I was, 35 years old and even though I didn't give up, I said, 'I can't help Toronto,'" Bower said. "It was my wife Nancy who told me, 'You had a childhood dream and it's your opportunity to go. If you don't make it, you don't make it.'"

Despite his initial hesitation, it was under the spotlight at Maple Leaf Gardens that he would thrive and become a legend to the fans in Toronto and the hockey community at large.

The experience he gained in New York seemed to make a difference the second time around. Bower's poke-check threatened any player who dared to attempt crashing Toronto's net.

Arguably one the best goalies in the history of the franchise, he handled the puck with skill and became known as a superior standup goalie. He was always the oldest member on the team and was the oldest in the league for his final 10 seasons, but his play showed no indication of his age.

The late Jean Beliveau always said Bower was the goaltender who gave him the most trouble.

Bower helped turn the Leafs around in 1958, leading the previous season's last-place club to an unlikely Stanley Cup final. They lost to the Montreal Canadiens in five games, but Bower's dream now seemed to be just a matter of time.

Two years later he won his first Vezina Trophy as the league's top goalie by racking up 33 wins, the most of any goalie in the 1960-61 season. The following season Bower won his first Stanley Cup — the first of three in a row for the Leafs — and posted some of the best playoff numbers of his career.

Like many players, Bower considered the first cup the sweetest. 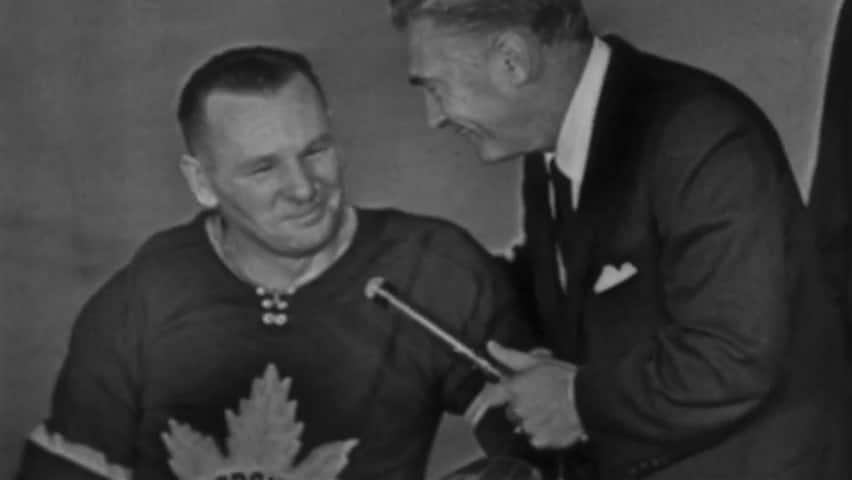 Johnny Bower and the Leafs at practice in 1960

"I had that dream from day one to have my name on the Stanley Cup," Bower said. "I just can't explain the feelings that you have inside you. You're like, 'Oh my gosh, I finally did it after all these years.'"

Not satisfied to rest on those Stanley Cup laurels, Bower continued to stand strong, playing through failing vision and problems with his hands.

In 1964, after their third Stanley Cup in a row, the Leafs decided to go with two goaltenders, adding all-star Terry Sawchuk to the lineup. Bower, though, didn't balk at the competition and the two went on to share the Vezina Trophy that season.

By the 1966-67 season, having not won a cup in two seasons and with eight players aged 35 or older, the Leafs were considered an over-the-hill gang.

However, a 42-year-old Bower and 35-year-old Sawchuk had one more championship in them, leading the Leafs to their fourth championship of the decade.

"[Bower was] just a great guy. The wonderful thing about this game of hockey is that it rewards so many great guys that give their heart and soul and their life to it," former NHLer and broadcaster Howie Meeker once said.

With his name engraved on the Stanley Cup four times, Bower retired at 45 after playing one game in the 1969-70 season. 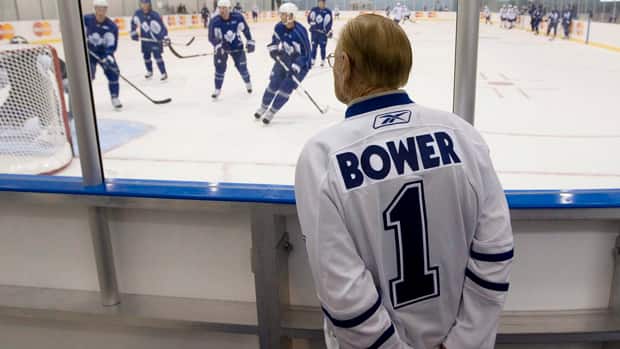 9 years ago
2:08
Johnny Bower gets an early Christmas gift, filled with memories and meaning. 2:08

Bower's professional playing career may have ended, but his passion for the game never wavered. After 24 years playing hockey in the minors and the NHL, Bower joined the Leafs organization as a goalie coach and scout.

In 1976, he was recognized with the ultimate honour.

"When they notified me that I was inducted in the Hall of Fame, I thought they made a mistake or something," Bower said. "It's right up there with winning the Stanley Cup to me."

A Leaf through and through

A Maple Leaf through and through, he continued to work for the club until he was 65. He finally stepped away in 1990, ending a 32-year run with Toronto.

His presence, though, remained in the community long after his retirement. Bower made it a point to participate in as many charitable activities and public appearances as possible.

"I love going out and helping out people," he said. "I always make time to help everyone else out. That's the way I was taught. I didn't have anything, so I figured I don't want to see anyone else that way.