John Davidson resigned as president of hockey operations of the Columbus Blue Jackets on Friday in order to take the same position with the New York Rangers.

John Davidson is going back to the New York Rangers organization he has been synonymous with for much of his hockey career.

Davidson was hired as team president Friday hours after leaving his post with the Columbus Blue Jackets. He returns to New York where he spent parts of eight seasons as a Rangers goaltender and was a TV analyst for almost a decade.

The 66-year-old leaves the Blue Jackets in a much better position than they were in when he took over as president of hockey operations seven years ago.

"The opportunity of rejoining the Rangers organization and returning home to New York, where my family and I have spent so many wonderful years, was one I simply could not pass up," Davidson said.

"There was only one opportunity that I would've considered leaving for, and the one before me now is that opportunity as I spent 30 years with the Rangers as a player and broadcaster and have strong ties to that team and the city of New York."

OFFICIAL: John Davidson has been named <a href="https://twitter.com/hashtag/NYR?src=hash&amp;ref_src=twsrc%5Etfw">#NYR</a> President.

Dolan called it "the start of a new and exciting chapter" in franchise history.

Davidson had been with the Blue Jackets the past seven seasons, helping turn an NHL also-ran into a regular playoff contender. Columbus won its first playoff series in this spring.

"He helped us forge a winning culture based on preparation, hard work, accountability and honesty," Blue Jackets President Mike Priest said. "He set the tone and hired talented people that put in place a plan to build the Blue Jackets through the draft and player development with the end goal being a team that could compete and have success at the highest level on a yearly basis."

Columbus owner John P. McConnell called Davidson's return to his roots an "extraordinary circumstance for him and his family." After saying upon hiring him that Davidson was the perfect person to lead Columbus' hockey operations department, McConnell believes this stretch has proved him correct. 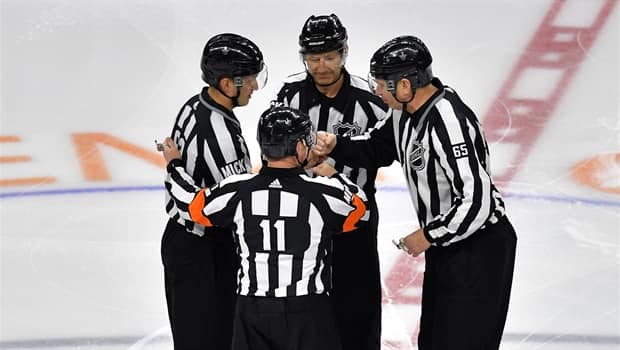 1 year ago
2:16
It's been a tough playoff run for NHL referees, so Rob Pizzo takes a look back at some other calls that still have fans scratching their heads. 2:16

The Blue Jackets made the playoffs in four of Davidson's seven seasons.

"He joined our team at a very difficult time and led a transformation that has resulted in consistent winning and appearances in the Stanley Cup playoffs," McConnell said. "J.D. is a man of great character and compassion and I completely understand his interest in the unique opportunity before him."

The Rangers are in the midst of a youth movement spearheaded by Gorton, who took over for Sather as GM in 2015.

This is the first domino to fall in an uncertain off-season for Columbus, which went all-in at the trade deadline and could have as many as four prominent players leave in free agency.

"The winning culture that now is entrenched in all of us will continue under the direction of Jarmo Kekalainen ... and the leaders within our hockey operations department," Priest said. "We remain committed to improving on the successes we've had in recent seasons with the goal of bringing a Stanley Cup championship to Columbus."