Dubois scores in overtime to lift Jets past Canucks

Pierre-Luc Dubois scored the overtime winner Sunday night, vaulting the Winnipeg Jets to a comeback victory over the Vancouver Canucks.

Game winner is 2nd of the night for recently acquired winger

Winnipeg's Pierre-Luc Dubois scored 27 seconds into overtime after Vancouver's Elias Pettersson forced the extra period with a goal in the final minute of regulation, and the Jets beat the Canucks 4-3 Sunday night, completing a two-game sweep.

The 22-year-old Dubois, playing his third game with the Jets, finished with two goals after missing four games with a muscle injury.

"My game is still not where I know it can be. I know I can improve on a lot of things — timing, execution, reads, stuff like that," he said. "But it felt good to be out there."

Finally getting on the scoreboard for his new team felt good, Dubois said.

"My first game, it was one of those games where you kind of want to forget about it. You just get your legs back in it, your hands back in it. Second game, I felt a bit better and then that injury where I missed some time," he said.

"So tonight to finally get out there and play and then get that nice pass from (Wheeler) and just score, it kind of felt like a weight off my shoulders and then the rest of the game to keep applying that pressure and keep getting better."

"He had an awfully big game, so we're pretty pleased with it," he said. "I'm more happy for him. It's great that the Jets win, but he's a young man that's been through an awful lot. He's done everything right here. His shift length, his work ethic, all things."

WATCH | Dubois wins it in OT: 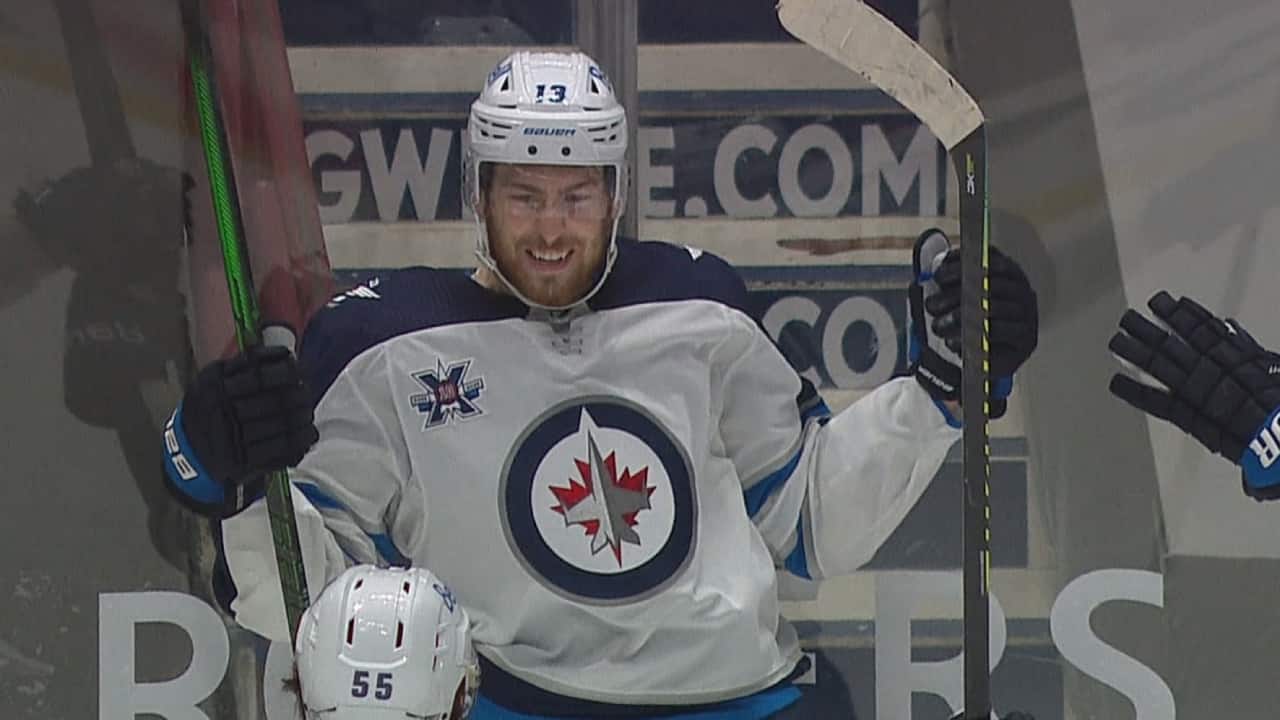 Dubois' 2nd of the night is OT winner for Jets

Winnipeg also got a goal and an assist from Mark Scheifele and a power-play goal from Neil Pionk in regulation.

Pettersson forced OT with his second goal of the game with 38 seconds left in the third.

"We have to be more crisp with the puck. I was trying to make some plays, I was losing too many puck battles," Pettersson said. "I mean, we have the game in our hands but we kind of let it go."

The Canucks also got a goal from Brandon Sutter.

WATCH | 9 NHL facts that will make you feel old:

Pettersson forced OT with a blast from the top of the left faceoff circle. The goal came during an extended period of six-on-four play after Winnipeg defenseman Josh Morrissey was called for delay of game for sending the puck over the glass and Vancouver pulled Holtby with 1:42 to go.

A power play earlier in the third had put the Jets up late . Sutter was called for high sticking 9:44 into the period after bringing down his stick on Dubois' head.

Winnipeg capitalized on the man advantage, with Pionk's blast from the point beating Holtby on the stick side.

The Jets were 1 for 3 on the power play, and the Canucks failed to convert on three opportunities with the extra player.

Scheifele knotted the score at 2-2 less than six minutes into the third.

Wheeler found the puck in a scrum along the boards and sent it to Scheifele as he streaked into the Canucks zone. Holtby stopped the initial shot but couldn't control the rebound and the puck dribbled into the net behind him.

Schiefele and Wheeler had already registered assists, helping Winnipeg get on the board 14:37 into the second.

Wheeler found Dubois at the bottom of slot and fed him a pass from the goal line. The centerman beat Holtby with a quick snap shot for his first goal in a Jets uniform.

Sunday marked Dubois' return to the lineup after missing four games with a muscle injury. It was just his third game since the Columbus Blue Jackets sent him to Winnipeg in a trade for winger Patrik Laine on Jan. 23.

Vancouver had a pair of goals in the first frame, starting with Sutter capitalizing on a fortunate bounce.

A shot from Canucks defenceman sailed wide and hit the end boards, sending the puck bouncing back to Sutter at the side of the Winnipeg net. The veteran forward popped it in past an out-of-position Hellebuyck, putting Vancouver up 3:38 into the game.

Pettersson added to the lead midway through the period with a play that appeared to leave Hellebuyck shaking his head. He had his back to the goalie when he put a stunning no-look shot through his legs and into the top-left corner of the net.