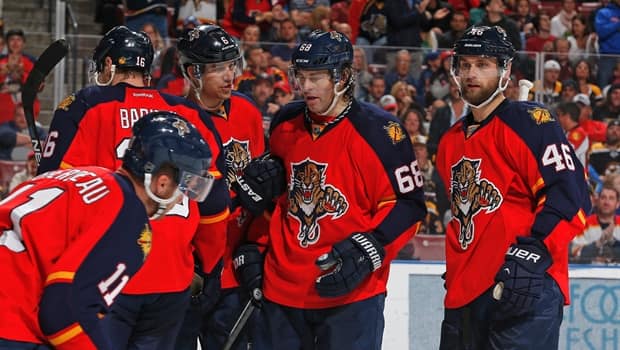 After being denied by Boston goalie Tuukka Rask, Jagr's rebound was buried by Florida Panthers teammate Aleksander Barkov, who cut the Bruins lead to 3-1 at 16:48 of the first period.

Jagr assist on Barkov goal puts him in sole possession of 3rd place all time on the points list <a href="https://t.co/49FCnjZmfT">pic.twitter.com/49FCnjZmfT</a>

With his 12th point in his last 13 games, the 44-year-old Jagr tops the Panthers with 49 points in 63 games this season.

But more important to Jagr is helping Florida to the playoffs for the first time since 2012.

After Monday's 5-4  overtime loss, the Panthers remained in second place in the Atlantic Division, tied in points with Boston but holding a game in hand. Division-leading Tampa Bay is one point ahead of Florida and the Bruins.

Besides the points milestone, Jagr also moved into sole possession of ninth place in NHL regular-season games played with 1,613, one more than Hall of Fame defenceman Ray Bourque.

In February, the Czech winger passed Brett Hull (741) into third place all-time in goals. At 743, he's 58 behind Howe for second and 151 behind Wayne Gretzky.

Among Jagr's other NHL accomplishments: