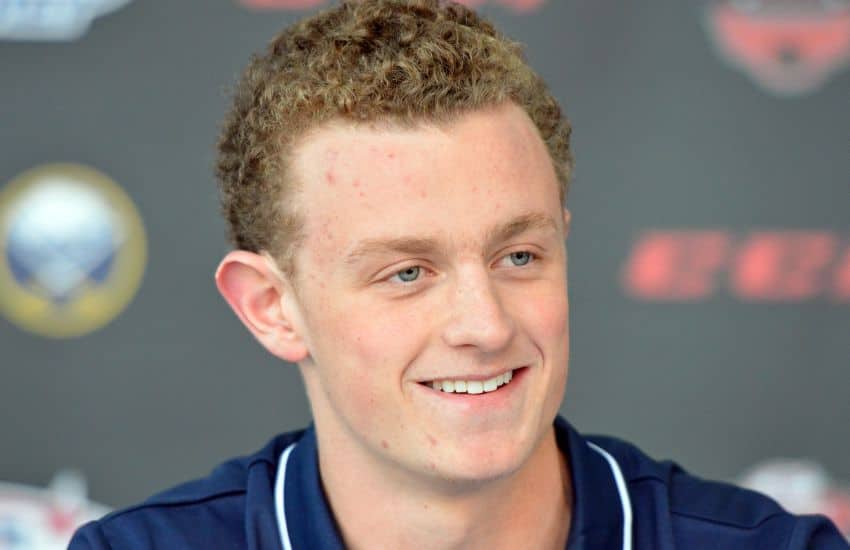 Jack Eichel is eager to begin his NHL career.

"I couldn't be more excited about it," Eichel said during his introductory press conference at First Niagara Center.

"Looking at the Sabres' organization, there's such a bright future here. It seemed like a no-brainer. It's been a dream to potentially be playing professional hockey, and I'm going to do everything in my power to make an impact for the Sabres next year."

Eichel had 26 goals in 40 games with Boston University and became the second freshman ever to win the Hobey Baker Award as the top player in college hockey.

The Sabres regard Eichel as a cornerstone in their rebuilding effort after finishing with the NHL's worst record in each of the last two seasons.

"This is a great event in this organization's history," Sabres general manager Tim Murray said. "This young man is going to hopefully take us places where we haven't been and take us up from where we've been the last few years."

Rookie deals are capped and Eichel is expected to receive the maximum value in his three-year, entry-level contract.

"It's a dream come true to be able to sign a contract," Eichel said. "But the real work starts now. The biggest dream is to make the team."

Eichel said he made his decision to turn professional this year after playing in last month's World Championships.

"Before the World Championships, I was a little bit unsure," he said. "After going over there and having the experience I did, talking to a lot of guys, I came back pretty set on moving on. I could never really make anything public because I hadn't been drafted yet."

"Watching him play at the World Championships, you see him play against NHL players, against good NHL players, and he competed at a high level against them," Bylsma said.

Murray also said he is close to signing O'Reilly to a contract extension. The two sides exchanged offers Wednesday.

O'Reilly is set to make $6.2 million during the final year of his contract next season. He was acquired along with McGinn in a draft day trade with Colorado for Nikita Zadorov, Mikhail Grigorenko and the 31st overall pick in last week's draft.