The resignation of Calgary Flames head coach Bill Peters in the aftermath of one of his former players alleging he used a racial slur 10 years ago is the latest blow for a sport that has encountered similar problems in recent years.

The Canadian Press · Posted: Nov 29, 2019 1:23 PM ET | Last Updated: November 29, 2019
The resignation of Calgary Flames head coach Bill Peters in the aftermath of one of his former players alleging he used a racial slur 10 years ago is the latest blow for a sport that has encountered similar problems in recent years.

Sixty-one years after Willie O'Ree became the NHL's first black player and paved the way for more minorities to play the sport and reach its highest level, hockey is still dealing with racial issues.

O'Ree was inducted into the Hockey Hall of Fame last year and has worked as an NHL diversity ambassador for more than two decades.

"[O'Ree] had to go through a lot, and the same thing has been happening now, which obviously means there's still a long way to go," former Washington Capitals forward Devante Smith-Pelly told The Associated Press last year after he received racial taunts during a game. "If you had pulled a quote from him back then and us now, they're saying the same thing, so obviously there's still a long way to go in hockey and in the world if we're being serious."

Here's a look at some incidents at high levels of the sport since the turn of the century:

2003: The Sault Ste. Marie Greyhounds were slapped with a $50,000 fine — then the biggest in Ontario Hockey League history — and former coach and GM John Vanbiesbrouck was banned from the league indefinitely for his racial slur at team captain Trevor Daley.

Vanbiesbrouck, who had already announced plans to sell his 25 per cent share in the Greyhounds, was not allowed to have "any further connection, association, affiliation, employment or ownership with the league or any of its member teams," the OHL said in a statement.

The league fell into a public-relations nightmare when Vanbiesbrouck, a decorated former NHL goaltender and one of only four Greyhounds to have his number retired, referred to Daley with a racial slur several times in a conversation he had with other Greyhounds players at their billet's home following a 6-1 loss to Guelph.

Vanbiesbrouck resigned after one more game.

2011: During an NHL exhibition game in London, Ont., a fan threw a banana onto the ice as then-Philadelphia Flyers forward Wayne Simmonds skated toward the Detroit Red Wings net in a shootout.

San Jose Sharks forward Logan Couture, who grew up near London, posted: "Wayne Simmonds is a good friend of mine. To hear what happened tonight to him in my hometown is awful. No need for this in sports, or life."'

While Simmonds shrugged off the incident, NHL commissioner Gary Bettman criticized the move the morning after the game.

"The obviously stupid and ignorant action by one individual is in no way representative of our fans or the people of London, Ontario," he said. 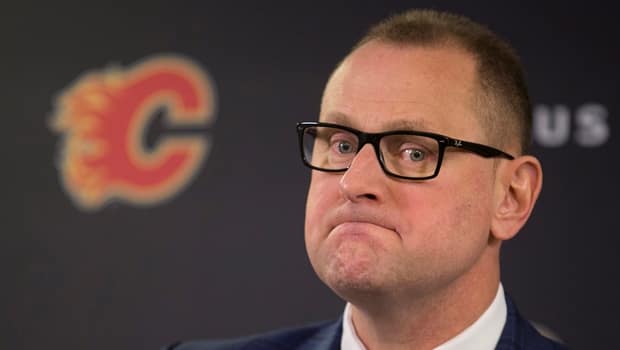 1 year ago
2:18
Listen to the essentials of what was said as Flames GM Brad Treliving speaks to the media Friday about Bill Peters resigning as head coach. 2:18

2012: The Boston Bruins and the owner of the Capitals scolded fans who let loose with a burst of racist comments directed at Joel Ward after he scored an overtime goal that won their playoff series for the Caps.

The Bruins said "these classless, ignorant views are in no way a reflection of anyone associated with the Bruins organization."

Capitals owner Ted Leonsis said on his blog: "Shame on these folks who decided to take to their keyboards and show their ignorance and their racism and hate."

2014: The Bruins condemned racial slurs about P.K. Subban that hit social media after the then-Montreal Canadiens defenceman scoring the winner in double overtime of a playoff game.

Bruins president Cam Neely issued a statement calling the tweets "racist" and "classless." He said they came from an "ignorant group of individuals" who do not reflect the organization.

2018: Four fans were ejected from Chicago's United Center for chanting a racial taunt while then-Capitals forward Smith-Pelly served a penalty.

An off-ice official sitting next to Smith-Pelly notified building security, and the fans were ejected.

"There's absolutely no place in the game of hockey or our country for racism," then-Caps coach Barry Trotz said. "I think it's disgusting."

"I like basketball but my profession is HOCKEY," Kane tweeted. "Thanks."