Dave Keon is the greatest Toronto Maple Leaf of all time, according to a list compiled for the team's centennial season. 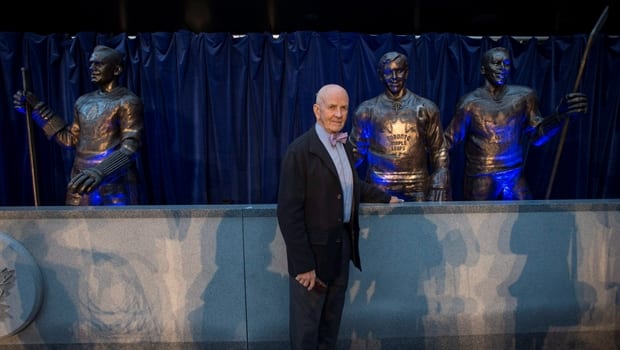 4 years agoVideo
1:56
Dave Keon, Tim Horton and Turk Broda were the latest to be immortalized as bronze statues in the Toronto Maple Leafs 'Legends Row.' 1:56

For decades, Dave Keon wanted no part of the Toronto Maple Leafs. On Friday, he was honoured as the greatest player in the team's 100-year history.

Keon won four Stanley Cups with Toronto and remains the only player in team history to capture the Conn Smythe trophy as playoff MVP.

"Obviously, winning Stanley Cups certainly helps your popularity," Keon said following a ceremony announcing the results. "I'm sure that had something to do with it."

Keon's rift with the Leafs stemmed from years of perceived mistreatment, including the club's unwillingness to retire his No. 14 sweater.

Leafs president Brendan Shanahan said it took only a phone call for Keon to accept an invitation to the event. He also felt Keon appreciated a gesture from coach Mike Babcock, who brought the team's former captain into the dressing room at one point last season.

The list was compiled by a 31-member voting committee as well as fans, 300,000 according to Shanahan.

Shanahan, a Toronto area native, said his favourite Leaf growing up was Sittler, who ranks second behind Sundin on the career scoring list. He thought Keon, the third-leading scorer in franchise history, was an appropriate choice though and a good indication of the appreciation he still enjoyed from fans.

Keon won the club's first and only Conn Smythe trophy in 1967 (the award didn't exist until 1965) and a Calder Trophy as the league's top rookie in 1961. He had 365 goals and 858 points in 1062 games for Toronto, third behind Sundin and Sittler in both categories.

He returned to the Toronto organization in public outings only in the past decade when past Cup-winning teams were honoured.

A member of the last Toronto club to win the Stanley Cup, Keon said he hoped today's group would "embrace the challenge" of getting back there one day.

"It's going to take a little while," Keon said, "but it seems they're getting the right players."