Expansion teams are not supposed to conduct themselves the way the Vegas Golden Knights have this season. Yet the team from the state of Nevada is four wins away from changing everything.

Expansion teams are not supposed to conduct themselves the way the Vegas Golden Knights have this season.

Expansion teams are supposed to stink. Look at the Columbus Blue Jackets. They still haven't won a playoff series after 17 seasons of existence.

But the Golden Knights have performed nothing like an expansion team. They're winners. They're in the Stanley Cup Final, authoring quite the implausible and remarkable story.

Sure, the rules were a bit more favourable for the Golden Knights with their expansion draft last June. But general manager George McPhee, assistant GM Kelly McCrimmon and their hockey operations department did quite a job building a winner for owner Bill Foley's $500-million US expansion team.

"I'm so proud of this group," Golden Knights veteran James Neal said after his team edged the Winnipeg Jets 2-1 on Sunday to take the West final in five games.

"We're not done yet. This is a special group. We've done a great job all year staying in the moment. We'll have lots of time to look back and enjoy this, but right now we're looking straight ahead."

But before they look straight ahead, it's fun to look in the rearview mirror to see how this team was built and became a winner.

There is no identity crisis here. This group knows exactly what it is – a bunch of players who were deemed expendable by their previous teams. They came together with a collective chip on their shoulder.

Some, like Neal and goalie Marc-Andre Fleury, left pretty solid situations with the Nashville Predators and Pittsburgh Penguins. Others, like defencemen Nate Schmidt, Shea Theodore and Brayden McNabb, were given a new lease on life in their professional careers. They were given an opportunity to step up and exhibit that they were ready for primetime. They all had a strong volition to prove themselves.

Another key to this success story is the coaching staff. Head coach Gerard Gallant and his longtime trusted assistant Mike Kelly were deemed expendable, too. Who can forget how the pair were let go by the Florida Panthers in the fall of 2016. They were left curbside outside the arena in Raleigh, N.C, as the Panthers bus pulled away for the airport, leaving Gallant and Kelly to chase down a taxi.

Gallant doesn't like to take the credit for the Golden Knights' remarkable run. He applauds Kelly for his work as well as the job Ryan McGill has done with the defence, and goalie coach Dave Prior with Fleury. Gallant, the old left wing from Summerside, P.E.I., also has praised his rookie assistant coach Ryan Craig and video coach Tom Cruz.

But Gallant has kept his group loose and constantly reminds them to have fun. 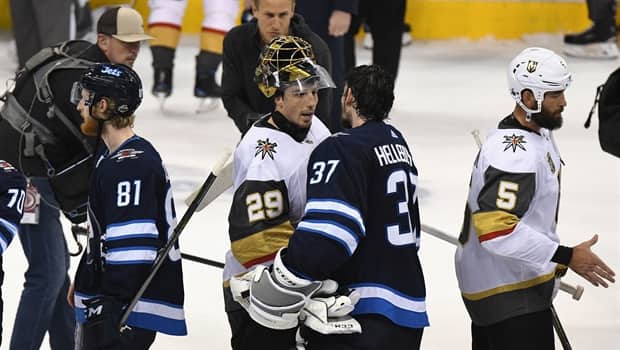 This is a close-knit bunch that lives in the same Vegas subdivision of Summerlin, near the team's practice facility.

Golden Knights alternate captain Deryk Engelland gave quite an on-ice pregame speech to the crowd that also galvanized the team. He's from Edmonton but played for the ECHL Las Vegas Wranglers in his first two years as a pro. He met his wife there and calls Las Vegas home.

"It came together very quickly," Neal said. "We all had the same mindset. We believed in each other, we believed in ourselves. Every single guy up and down the lineup chipped in, making this a true team."

They've ripped through the playoffs at 12-3 and became the first expansion team to make the final since St. Louis did it 50 years ago when the Blues represented a division that consisted of six new expansion teams.

The Golden Knights' strength in the post-season has been their team speed, timely goals, a strong transition game and wonderful goaltending from Fleury. Working with Prior, Fleury rebounded in the regular season with a career-high save percentage of .927 and he has been even better in the playoffs at .947.

"We've been getting big goals and big saves at the right time and you need that in the playoffs if you want to go far," Neal said.

And that's why this expansion team has come up aces.