Ivan Provorov scored at 15:03 of the second overtime and the Philadelphia Flyers beat the New York Islanders 5-4 on Thursday night to force a deciding Game 7.

The Associated Press · Posted: Sep 03, 2020 11:32 PM ET | Last Updated: September 4
The Philadelphia Flyers credit Oskar Lindblom's fight against bone cancer for inspiring them all year. Having him back in a game for the first time in nearly nine months provided a big emotional lift in a key playoff game.

Ivan Provorov scored at 15:03 of the second overtime and the Flyers beat the New York Islanders 5-4 on Thursday night to force a deciding Game 7.

"All season he's been [an inspiration], not just tonight," goalie Carter Hart said of Lindblom. "Him coming in the lineup and playing definitely gives our team a huge boost of energy. ... . It's pretty amazing what he's gone through and how much he's overcome and persevered."

"The kid has so much courage," he said. "He played unbelievable, too." 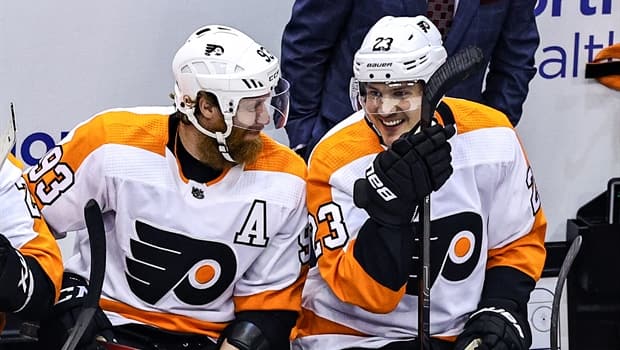 2 months ago
0:42
After completing his cancer treatments in July, Flyers forward Oskar Lindblom returned to the lineup for the first time since his Ewing's sarcoma diagnosis in December. 0:42

Kevin Hayes, James van Riemsdyk, Michael Raffl and Scott Laughton also scored for Philadelphia, and Hart made a career-high 49 saves. The Flyers won a third overtime game in a post-season series for the first time.

"Carter kept us in this game," Giroux said. "He made some huge saves for us and I was pretty glad to see Provy's shot go in there."

Mathew Barzal and Derick Brassard each had a goal and an assist, and Anders Lee and Matt Martin also scored for New York, which trailed 2-0 midway through the first period before taking leads of 3-2 and 4-3. Semyon Varlamov stopped 26 shots.

"It's an unfortunate play there at the end, but it happens," Barzal said. "Now it's a winner-take-all Game 7."

Game 7 is Saturday, with the winner advancing to face Tampa Bay in the conference finals. 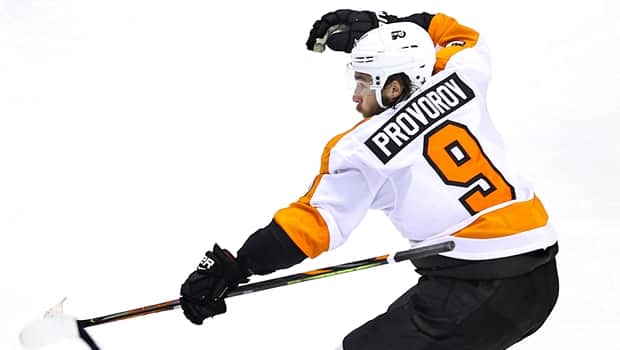 2 months ago
1:34
Ivan Provorov scored in double overtime and Carter Hart made 49 saves as the Philadelphia Flyers beat the New York Islanders 5-4 to force a game 7. 1:34

Philadelphia had a chance on a flurry in front of the Islanders' net early in the second overtime, but Varlamov stopped the puck and Pelech dove at the loose puck to keep it out with his stick and glove.

After Pelech lost the puck on a shot attempt when his stick broke, the Flyers pushed it up the ice and Provorov got a pass from Hayes and beat Varlamov.

"I saw their defenceman broke his stick, Haysie was carrying the puck in and I knew he was going to try to make a play," Provorov said. "He threw the puck up front, I got it and their forward was sliding into the lane so I shot it opposite side and tired to go top corner and got it there."

Hart had 38 saves in regulation. He made several nice stops in the first extra period, including a save on Jordan Eberle's backhand midway through.

"Our shots were there, our chances were there for sure," Lee said. "We just couldn't get [another] one to go, We played some pretty good hockey to create those chances. At some point you got to bury one, but give Hart a little bit of credit.He had a phenomenal game. We just couldn't get the last one by him."

Laughton, who had the overtime winner in Game 5 on Tuesday night, tied it at 4. He brought the puck up the left side on a rush, went forehand-backhand-forehand and beat Varlamov at 9:53 of the third.

The Islanders had a flurry of chances during a power play late in regulation, but Hart stopped two slap shots by Ryan Pulock, and tries by Barzal and Lee — all in the span of 11 seconds.

Lindblom played for the first time since Dec. 7. The 24-year-old was diagnosed with a bone cancer and was undergoing radiation treatments that finished July 2. He rejoined the team in Toronto last month during the Flyers' series against Montreal.

"We started talking a little bit yesterday and took a decision today," Lindblom said of playing. "It's hard to step in a playoff game, especially these that we have to win, but tried to grind it out and lucky we came out with a win here."

Trailing 2-1 after 20 minutes, the Islanders took the lead with two goals early in the second period.

First, Martin fired a shot that went off Flyers defenceman Justin Braun and through Hart's five-hole just as the Islanders' Casey Cizikas came crashing into the goalie. at 1:24. Replays showed Cizikas was tripped by Braun.

Flyers coach Alain Vigneault challenged for goalie interference but the call stood, putting the Islanders on the power play. It was Vigneault's third failed challenge of the series.

The Islanders took advantage 1:42 later as Mathew Barzal's shot from the right side was stopped by Hart, but the puck rebounded to the left, where Lee lifted it high over the goalie to put New York ahead. It was Lee's fourth of the series and seventh of the post-season.

"There's no doubt this wasn't one of our better games," Vigneault said. "At the end of the day we found a way to get the job done. We found way to come back in the third ad tie the game against a team that doesn't give up a lot of leads."

Raffl tied it at 3 as he knocked in the rebound of a shot by Nicolas Aube-Kubel with 6:39 left in the middle period.

Barzal put New York back on top when he beat Hart from the left circle with 30 seconds remaining in the second.

Hayes got the Flyers on scoreboard first after the Islanders turned the puck.Hayes got a pass from Travis Konecny and beat Varlamov high on the blocker side with 9:44 left in the opening period.

The Flyers made it 2-0 when van Riemsdyk beat Varlamov with a slap shot from the left circle with 8:08 left.

Just seconds after an Islanders power play expired, Brassard tipped a pass from Devon Toews past Hart to pull the Islanders within one with 3:27 left in the first.