Islanders pot a pair in the 2nd period to down Flyers

Matt Martin and Leo Komarov scored in the second period as the New York Islanders rallied to beat the Philadelphia Flyers on Saturday night, taking a 2-1 lead in their conference semifinal series.

Matt Martin and Leo Komarov scored in the second period as the New York Islanders rallied to beat the Philadelphia Flyers 3-1 on Saturday night, taking a 2-1 lead in their conference semis.

Anders Lee also scored, and Semyon Varlamov had 26 saves to rebound after a rocky Game 2 that saw him benched in the first period in an overtime loss to the Flyers.

"If you go back to the first 68 games of the regular season, he was very good after a loss and bounced back," New York coach Barry Trotz said of his goalie. "I think the maturity of (Varlamov) as a pro shows in volumes, and it shows especially after losses."

The playoffs resumed after a two-day break to protest racial injustice, the latest twist in an unprecedented, pandemic-halted season. Game 4 is Sunday night. 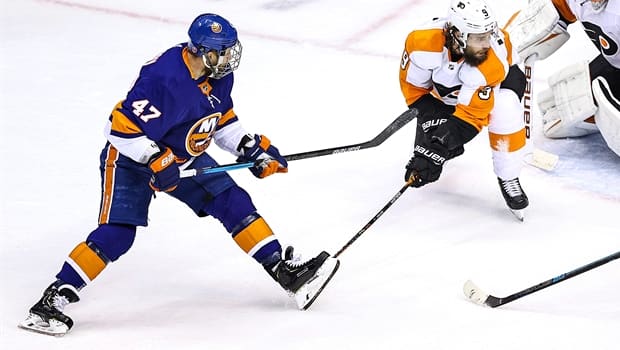 2 months ago
1:14
Leo Komarov squeaked in New York's second goal in their 3-1 win over Philadelphia with just five seconds remaining in the second period. 1:14

Tyler Pitlick scored for the Flyers in the first period, and Carter Hart had 26 saves.

Pitlick's wrist shot from the top of the right circle flashed past the glove of a screened Varlamov glove to give the Flyers a 1-0 lead 5:42 into the game. The play was set up by a puck battle behind the net won by Scott Laughton, who was able to power his way out and drop the pass off to Pitlick.

After a couple near misses by Mathew Barzal early in the second, the Islanders' centreshovelled a pass out from the back boards to a wide-open Martin on the doorstep for the tying goal at the 7:12 mark.

Komarov gave the Islanders their first lead when his shot in heavy traffic trickled through Hart's pads and over the line with 6 seconds left in the middle period.

"We didn't have a good first period, they got to their game and kind of took it to us for a little while," Martin said. "I think in the intermission we kind of regrouped. The last 10 minutes of the first was decent, but we knew we had to come out with a strong second, and we took the game over from there."

Lee put the Islanders up 3-1 on a power play early in the third when his shot in traffic bounded past Hart.

"I tried to get it to come off the (goalie's) pad," Lee said. "So it's a shot I was looking for and kind of got a bounce for sure."

The Flyers pulled the goalie on a late power play but Varlamov held up to the 6-on-4 attack.

"Loved our pace the first 10, 12 minutes," Flyers coach Alain Vigneault said. "I think we were playing the type of game that we wanted to play, and then somehow we just lost it. We stopped being first on the puck, stopped making the plays that we needed to make with the puck and they slowly but surely found momentum."

Said Pitlick: "We had some stretches in the game where we're wearing them out a bit, but we didn't do it enough."

Lee said the two-day pause in the playoffs in recognition of social justice issues was valuable for the players.

"You know, as professional athletes young kids they look up to us, and I think we can set a great example of unity and coming together and inclusion," the Islanders' captain said. "I think it was a great couple of days for all of us to have conversations I don'think we have enough and you know, (it's) a good starting point."