Michael Frolik had a goal and two assists to lead the red-hot Calgary Flames to a 4-3 comeback victory over the Florida Panthers on Friday night.

Stuck on the bench for most of the first period, Michael Frolik got promoted and made the most of it.

After rejoining the second line with Mikael Backlund and Matthew Tkachuk, Frolik had a goal and two assists to lead the streaking Calgary Flames to a 4-3 comeback victory over the Florida Panthers on Friday night.

"It wasn't the start I was looking for," said Frolik, who had his first three-point game in three seasons. "It's not easy — you're cold, you're not in the game. When you get out there, you get a 10-second shift and then they switch the line."

Down 2-0 in the second, Calgary got the comeback started at 10:14 when Frolik deflected in Backlund's shot for his 11th goal.

The Flames tied it five minutes later on a terrific setup by Frolik. Darting down the wing, he stopped sharply after gaining the zone, then patiently waited for Mark Giordano to jump up into the rush before sliding a perfect cross-ice pass that the captain fired past goalie Roberto Luongo.

Florida coach Bob Boughner challenged the goal, citing goaltender interference on Tkachuk, who slightly bumped Luongo seconds before the puck went in, but the call on the ice stood. 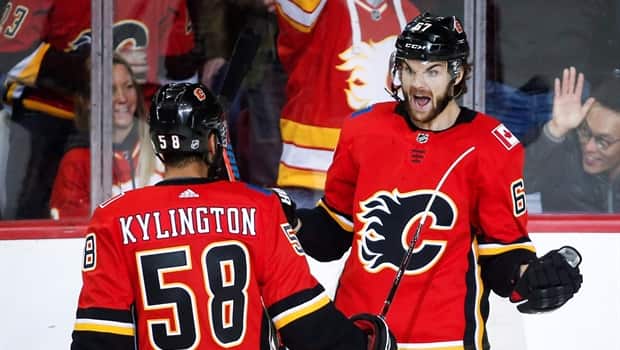 2 years ago
1:55
Frolik had a goal and two assists as the Flames won their 4th straight contest, beating the Florida Panthers 4-3. 1:55

Another primary assist from Frolik gave Calgary the lead 8:29 into the third. Pouncing on Jonathan Huberdeau's turnover inside the blue line, Frolik fed Tkachuk all alone in front for his 21st goal.

"I don't know how he saw me. I was just hiding in the weeds back there and he made a great play," Tkachuk said.

Frolik has eight points (four goals, four assists) in seven games since coach Bill Peters made him a healthy scratch on Dec. 29. It's been a bumpy season for the veteran, who has bounced between lines and missed four weeks due to injury.

"He's been awesome," coach Bill Peters said when asked how Frolik has handled it. "He's been great. A good pro, veteran guy. He's been in the league a long time."

Peters wanted to roll four lines, but that didn't materialize due to the early deficit, so he juggled his personnel and went down to three.

"We fell behind early and didn't have any jump, so then we had to get going with nine guys and try to get nine guys more ice time and a little bit more of an emotional attachment to the game," he said.

Sean Monahan scored into an empty net for the Flames (29-13-4). The Western Conference leaders have won four games in a row to improve to 7-1-1 in their last nine.

Still, Peters isn't happy with his team's play of late.

"We haven't played well here for a while and it's been masked by the fact we've got wins," the coach said.

"It seemed like we started to panic a little bit and get away from having some poise and making plays that are needed with the puck," Hoffman said. "We kept chipping it back to them and then we weren't able to change. Long change in the second period and they kept coming."

"At the end of the day, we had four or five glorious opportunities to go ahead in this game and get the next goal and we never did. Give their goalie some credit. He made some big saves," Boughner said.

Monahan's 24th goal ended up the game-winner after Dadanov scored with 20 seconds remaining.

Building on a solid opening 20 minutes, the Panthers surged in front by two on Huberdeau's breakaway goal 20 seconds into the second. Sprung in alone on a terrific pass by Keith Yandle, Huberdeau slipped a shot through Rittich's pads.

Taking advantage of a sleepy start by the Flames, who were outshot 10-4 in the first, Florida scored the only goal of the period when Hoffman got his 21st after a turnover by Noah Hanifin.