Matthew Tkachuk scored the only goal in the shootout, and the Calgary Flames beat the hometown Philadelphia Flyers 3-2 on Saturday to stop a six-game slide.

The Calgary Flames used a fortunate bounce to pick up a sorely needed win.

Matthew Tkachuk scored the only goal in the shootout, and the Flames beat the Philadelphia Flyers 3-2 on Saturday to stop a six-game slide.

Lindholm tied it at 2 when he scored with 1:23 left in regulation. After David Rittich was pulled in favour of an extra attacker, Rasmus Andersson's slap shot from the point went wide of the net. But it ricocheted off the back boards to a wide-open Lindholm, who knocked in his 11th of the season.

"We got a little bit of a bounce, but we were due for a bounce," Peters said. "It's crazy. Some of the stuff that hasn't gone in was challenging. We were due."

Andrew Mangiapane also scored for the Flames, who were shut out in their previous three road games as part of their skid.

"It just feels really nice to be back in the win column," Andersson said. "It felt like a long time ago. We're all excited in here." 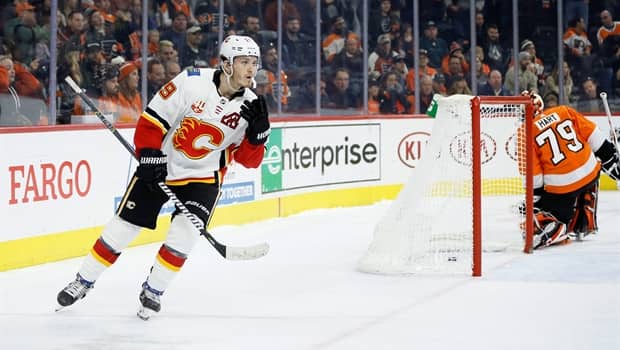 Kevin Hayes and Jakub Voracek scored for Philadelphia, which lost for the fifth time in six games.

"We played extremely well but just came out on the wrong side of a shootout," Flyers coach Alain Vigneault said.

Rittich made 27 saves and stopped all three Flyers attempts in the tiebreaker. Tkachuk, Calgary's second shooter, scored on a backhander that went through Carter Hart's legs.

Philadelphia grabbed a 2-1 lead with 3:46 left in regulation when Hayes capitalized on a stellar hustle play by rookie forward Joel Farabee.

Rittich tried to play the puck behind the net, but Farabee forced him into a turnover. Hayes then converted a backhander for his sixth of the season and second in as many games.

Mangiapane tied it at 1 1:01 into the third period, stopping the Flames' long scoreless road drought. After a turnover by Flyers rookie Morgan Frost in his third career game, Mangiapane's wrist shot went off defenceman Philippe Myers and past Hart.

Calgary's previous road goal had come Nov. 3 at Washington with two seconds left in the first period, a span of 261 minutes, 3 seconds between road scores.

"You have to stay positive," said Mangiapane, who played with a full face shield after breaking his nose in Thursday's 5-0 loss at St. Louis. "As of late, goals haven't been bouncing our way. Eventually they would."

Flames star Johnny Gaudreau, a South Jersey native who attended nearby Gloucester Catholic High School, had the secondary assist on Lindholm's goal. He has four goals and 10 assists in 11 games against the Flyers.