Oilers knock off Sharks, set up 2nd round date with Ducks

Two breakaway goals less than a minute apart Saturday night proved to be the difference as the Edmonton Oilers defeated the San Jose Sharks 3-1 and advanced to the second round of the Stanley Cup playoffs. 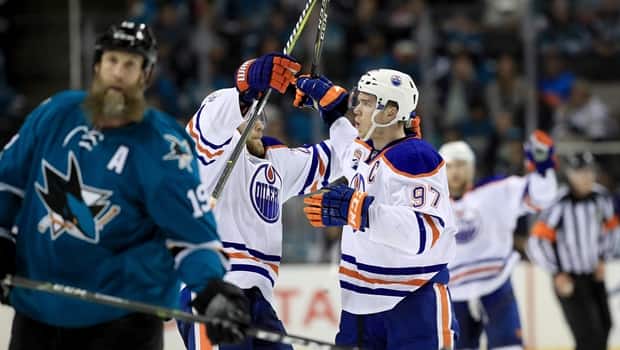 Game Wrap: Oilers move on to second round with Game 6 win

Leon Draisaitl isn't going to settle on a first-round victory.

Two breakaway goals in less than a minute proved to be the difference Saturday night as the Edmonton Oilers defeated the San Jose Sharks 3-1 and advanced to the second round of the Stanley Cup playoffs.

The goals by Draisaitl and Anton Slepyshev came 56 seconds apart, and Oilers goalie Cam Talbot made 26 saves for the Game 6 victory.

"It feels great," Draistail said of the series victory in Edmonton's first playoff appearance since 2006.

"You know, there's only eight teams left and we're one of them. This organization needed this and I think we deserve it. We played good all year, but we're not done yet."

Veteran Patrick Marleau scored the lone goal for San Jose with 7:48 left in the game while Oilers star Connor McDavid hit the empty net with less than a second remaining.

Beating San Jose earned the Oilers a second-round matchup with the Anaheim Ducks.

The Oilers victory took on added significance as the Sharks were the defending Western Conference champions after reaching the Stanley Cup final for the first time a year ago. Much was made of the gap in playoff experience between the veteran Sharks and the much younger Oilers.

The first three minutes of the second period were a microcosm of the game, with the Oilers able to take advantage of their opportunities and the Sharks unable to capitalize on any of their own.

The sequence began when Oilers defenceman Oscar Klefbom blocked a shot by Sharks defenceman Justin Braun and the puck was steered to Draisaitl. His 15-foot wrist shot beat Sharks goalie Martin Jones and the Oilers took a 1-0 lead at the 54-second mark.

"He was pretty tight on me," Draisaitl said of Braun, who was draped over him when the two reached the net. "He was right on my back so I just tried to get it on net."

On the next shift, Sharks forward Chris Tierney's pass to Paul Martin at the blue line was fumbled long enough for Slepyshev to swoop in and carry the puck into the San Jose zone where he made it 2-0 at 1:50.

The Sharks immediately bounced back with a pair of scoring chances — the first a two-on-one odd-man rush, the second when Marleau drove the net after taking a pass from Joe Thornton — but came away empty handed.

"I was just trying to stay patient," Talbot said of his key save. "And when he made the move I tried to get a good push across because he's so quick he can beat you back there pretty quick. I just got my pad on it."

Marleau did beat Talbot in the third period after taking a cross-crease feed from Couture to make it 2-1. San Jose nearly tied the game on a power play about four minutes later, but a shot by Joe Pavelski hit both the crossbar and a post.

Edmonton Coach Todd McLellan again rejected the suggestion that the experience he and two of his assistants had coaching in San Jose made the victory more special. But his players did not sound totally convinced.

"They know all those guys," Talbot said. "I'm sure it's a great feeling for those coaches and we're happy for them."

Edmonton won three of the five games against Anaheim in the regular season, the most recent a 3-2 overtime win on April 1.