Matt Murray robbed Connor McDavid on a penalty shot for one of his 38 saves and the Pittsburgh Penguins beat the struggling Edmonton Oilers 3-1 on Wednesday night.

The NHL's most electric playmaker swooping in on him and his team's one-goal lead very much in doubt, Pittsburgh Penguins goaltender Matt Murray did something that's kind of tough when Edmonton's Connor McDavid has the puck dangling on his stick and the game in the balance.

Murray waited. He figures he didn't really have a choice.

"He's got 100 different moves in his arsenal," Murray said.

This time, though, McDavid could have used 101. Murray made an acrobatic stop with his glove hand on McDavid's penalty shot late in the second period to keep Pittsburgh in front and the Penguins beat the reeling Oilers 3-1 on Wednesday night.

McDavid earned the chance after getting pulled down by Pittsburgh's Jake Guentzel on a breakaway. McDavid walked in on Murray slowly from the left before making his way across the crease. The delayed wrist shot from the player Murray called "the best in the world" ended up not in the net but in Murray's awaiting glove.

"I think maybe he knew I was going to do it," McDavid said. "So, got to find something new." 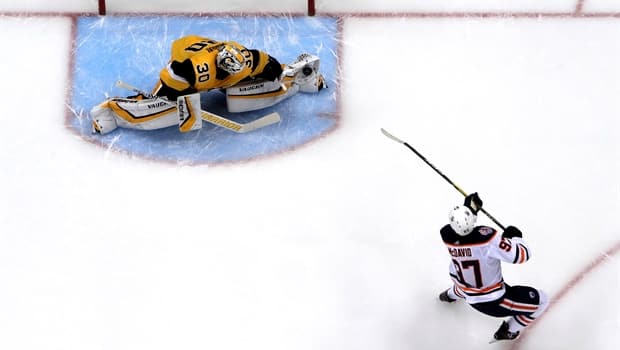 2 years ago
2:10
Matt Murray made 38 saves and the Pittsburgh Penguins hung on for a 3-1 win against the Edmonton Oilers on Wednesday night. 2:10

The stop was the flashiest of Murray's 38 saves, and the one most critical to helping the Pittsburgh win consecutive games for just the second time in five weeks as it tries to stay in the middle of the crowded Eastern Conference playoff chase.

"That's a big turning point," Penguins captain Sidney Crosby said. "If that goes in late in the period like that, it's a big shift in momentum."

Instead, the Penguins remained unbeaten (6-0) against the Oilers when both Crosby and McDavid are on the ice. Bryan Rust, Teddy Blueger and Jared McCann all scored as Pittsburgh picked up two vital points despite playing without suspended centre Evgeni Malkin, forced to sit while serving a one-game suspension for an illegal high stick. Crosby finished with one assist and spent large portions of the night going head to head with the 22-year-old McDavid.

'It's a great challenge'

"It's a great challenge," the 31-year-old Crosby said. "He's pretty tough to defend. A lot of times you can be in good spots and good positionally but with his speed if you're even you're probably in trouble."

McDavid picked up an assist on Leon Draisaitl's first-period goal but was otherwise held in check. Mikko Koskinen stopped 31 shots for the Oilers but couldn't stop Edmonton from falling for the eighth time in nine games.

"We had a bunch of chances to tie it," McDavid said. "I have to bear down on a couple. Credit to them. They had that four-minute stretch where they scored two and held on."

The second meeting of the season between two of the game's generational talents the electricity of the first — when McDavid and Crosby both scored, with Crosby getting the winner in overtime back on Oct. 23 — but with considerably higher stakes, at least for Pittsburgh.

The Penguins entered play with a tenuous one-point lead over Carolina for the second wild card in the East. Though Pittsburgh rode a career-high 50 saves from Murray in a one-sided road victory in Philadelphia on Monday, it also continued a pattern of one step forward, one step back.

Defenceman  Olli Maatta went down in the first period with an upper-body injury that will sideline him indefinitely and the NHL ordered Malkin to sit out as penance after Malkin flung his stick wildly at Philadelphia's Michael Raffl late in the third period, forcing Pittsburgh head coach Mike Sullivan to get creative in an effort keep his team's fragile surge going. He moved Nick Bjugstad to center the second line and reshuffled the defensive pairings, including giving Chad Ruhwedel his first appearance since Nov. 19.

It led to a bit of a sluggish start, and McDavid wasted little time taking advantage as the Penguins tried to find their footing. He got a pass in front of the Pittsburgh bench from Oscar Klefbom to spark a 2-on-1 and slid a pass over to Draisaitl that beat Murray 4:45 into the game for his 33rd of the season.

Rust gave the Penguins a needed spark early in the second period when he put together a dazzling short-handed shift with Matt Cullen that ended with Rust creeping out from behind the Edmonton net and stuffing a puck past Koskinen at 2:35.

Blueger put Pittsburgh in front at 6:10 when Kris Letang banked a pass off the side of the Edmonton net that landed on the rookie's stick. Blueger ripped it by Koskinen for his third goal in seven career games.

McDavid used his speed to split Letang and Guentzel, earning a penalty shot for his efforts with 2:35 left in the second.