The fans came to see Connor McDavid and he didn't disappoint, scoring a slick goal as the Edmonton Oilers defeated the Ottawa Senators 4-2 on Thursday.

Connor McDavid and the Edmonton Oilers had a reasonable excuse for being sluggish at the outset against the league-worst Ottawa Senators.

McDavid scored a slick goal, Mikko Koskinen made 35 saves and Edmonton got over feeling groggy to beat Ottawa 4-2 on Thursday night.

Edmonton was coming off a 6-2 loss to Toronto on Wednesday night and because of travel issues, the team didn't arrive at its Ottawa hotel until 3:30 a.m.

"We had no energy at the start," coach Ken Hitchcock said. "Connor gave us a big boost by his play. That helped a lot and then Cave's line really got wheeling and that was a good sign. We started to get juice in the second period, but we were running on fumes at the start."

Chris Tierney and Mark Borowiecki scored for the Senators, who lost their sixth straight, and Craig Anderson stopped 22 shots in his ninth straight defeat. Ottawa was coming off a 7-2 loss to Washington in which it looked overmatched, but the Senators gave a more consistent effort in their latest defeat.

"We know we can have that effort every night and if we bring that day in, day out for the rest of the season we'll be just fine," Colin White said. "Sometimes it's tough, but to come back and work even harder after that kind of game shows a lot about us." 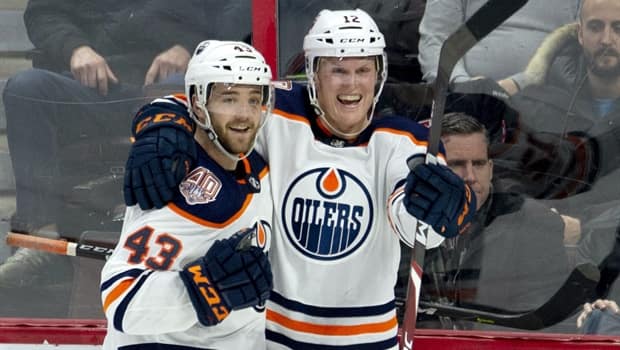 2 years ago
1:40
The Ottawa Senators suffered their 6th straight loss on Thursday night as they fell to the Edmonton Oilers by a 4-2 final. 1:40

White believed he had tied the game with Ottawa trailing 3-2 in the third period, but the goal was called off because of a high stick. White knocked the puck down and then scored.

It was the first home game for Ottawa since Mark Stone was traded to Vegas, but thanks to McDavid the Senators had one of their biggest crowds of the season.

"It was fun, there was good energy," Borowiecki said. "A lot of blue and orange in warm-ups, but that's the Connor McDavid Canada tour so it's going to happen. It was nice to get some support and we appreciate fans coming out and sticking behind us in this tough situation. I know it's not easy for the city."

Edmonton was up two goals after two periods and took a 3-1 lead 1:46 into the third when Cave took advantage of a giveaway by Christian Jaros for his second of the season.

Ottawa made it a one-goal game when Borowiecki scored his first of the season at the seven-minute mark, but Kassian iced it for the Oilers with an empty-net goal.

"He's definitely a guy who's passionate about scoring, especially in practice, so it's good to see him get out there and get one," Anderson said of Borowiecki's goal.

Trailing 1-0, the Oilers tied it in the second when McDavid scored his 33rd of the season. McDavid dug the puck out of Oscar Lindberg's skates and then beat Anderson high from in close with a deke to the forehand.

"The game was kind of flat-lining at that point," McDavid said. "They came out with a lot of jump and scored one and then in the second they didn't give up much. Sometimes it just takes a little break and the offense starts coming."

Edmonton took a 2-1 lead late in the period as Thomas Chabot left Gagner all alone. Gagner took a great pass from Ty Rattie for his fourth of the season.

Anderson was busy from the start, making a couple big saves on McDavid early on, but it was the Senators who scored first.

Tierney scored his first in 19 games as he came from behind the net, grabbed a loose puck in front and beat Koskinen through the legs.