Andrew Mangiapane had a goal and two assists as the Calgary Flames cruised to a 5-1 victory over the Edmonton Oilers on Friday.

Scoring early in every period was a recipe for success for the Calgary Flames on Friday.

Andrew Mangiapane had a goal and two assists as the Flames cruised to a 5-1 victory over the Edmonton Oilers — getting goals 11 seconds, 68 seconds and 57 seconds into each period.

"It sure helps. Any time you can score as quickly in periods as we did, it's helpful. You get to play out in front as opposed to behind and I thought that was a big thing for us tonight," said Flames interim head coach Geoff Ward. "I thought it was our most complete hockey game in a long time. I thought the guys did a good job playing the right way."

Matthew Tkachuk, Sean Monahan, Elias Lindholm and Mikael Backlund also scored for the Flames (20-15-5), who had lost four of their previous five games.

WATCH | Flames find some groove in win over Oilers: 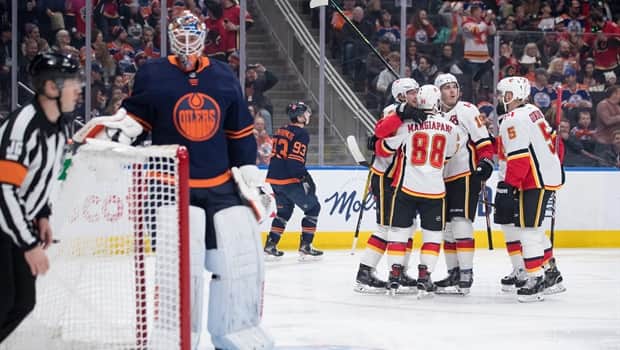 11 months agoVideo
1:42
The Calgary Flames captured a decisive 5-1 win over the Edmonton Oilers in the Battle of Alberta. 1:42

"We came to each period and we scored right away so it was huge for us," said Calgary goalie David Rittich, who made 28 saves for the win in net. "The guys did a really good job and they didn't get too much on me. It wasn't that hard of a game, but I'm taking those two points and going home."

"We've kinda thrown our good start away, but we've given ourselves a chance in the second half here to chase down a playoff spot," McDavid said, adding that the team is clearly in a bit of a funk at the moment.

The meeting was the first between the Flames and Oilers this season.

It was a disastrous start for Edmonton. Ryan Nugent-Hopkins was muscled off the puck behind the net and Lindholm sent it in front to Mangiapane, who was all alone to score his eighth of the season past Oilers starter Mikko Koskinen. The goal came on the first shot of the game, just 11 seconds into the first period.

Calgary added to its lead 12 minutes into the opening period as Mangiapane won a battle with defender Darnell Nurse and sent it across to Tkachuk for this 15th.

Nurse got some redemption a couple minutes later as his shot was tipped past Rittich by McDavid for his 22nd of the year.

The Flames made it 3-1 just 68 seconds into the middle frame as a soft wrist shot from Monahan trickled through Koskinen's legs.

Calgary didn't let up, with Lindholm sending a shot through a screen past Koskinen for his 16th of the season — prompting the Oilers to replace him in net with Mike Smith after the starter allowed four goals on 24 shots.

They got another early-period goal in the third as Backlund beat Smith on a short-handed breakaway just 57 seconds in to put Calgary up by four goals.

The Flames are back in action on Sunday when they host the Vancouver Canucks, while the Oilers are off until Tuesday, when they welcome the New York Rangers to town.