Jesse Puljujarvi scored twice in the first period as the Edmonton Oilers held off a wild third period Calgary rally to beat the Flames 7-5 on Saturday night.

Jesse Puljujarvi scored twice in the first period as the Edmonton Oilers held off a wild third period Calgary rally to beat the Flames 7-5 on Saturday night.

The Oilers had a 6-1 lead in the third period before Calgary scored four in a row to come within one. 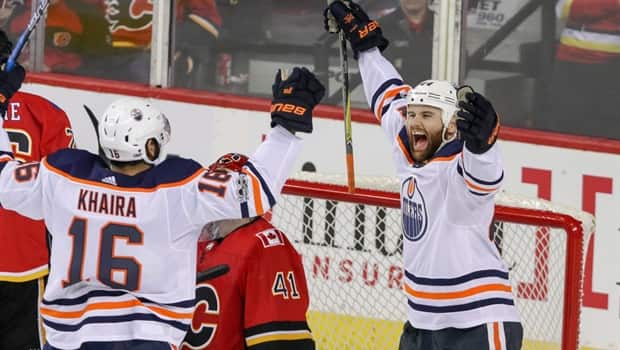 Oilers hang for win over Flames in wild Battle of Alberta

Jujhar Khaira, Mark Letustu, Milan Lucic, Patrick Maroon and Ryan Nugent-Hopkins also scored for Edmonton (11-14-2). Going back to the start of last season, the Oilers have won six straight against Calgary, outscoring them 31-16.

Laurent Brossoit made 29 saves for the win in net. Mike Smith kicked out 22-of-27 shots through two periods before giving way to David Rittich, who made four saves on six shots.

The 19-year-old Puljujarvi opened the scoring 10:29 into the first period when the puck caromed to him off the end boards after Drake Caggiula missed the net on his slapshot.