The Anaheim Ducks rode a fast start to a 6-3 win over the Edmonton Oilers and got back into their playoff series Sunday night.

Edmonton comes back from 3-0 hole before Anaheim reclaims control 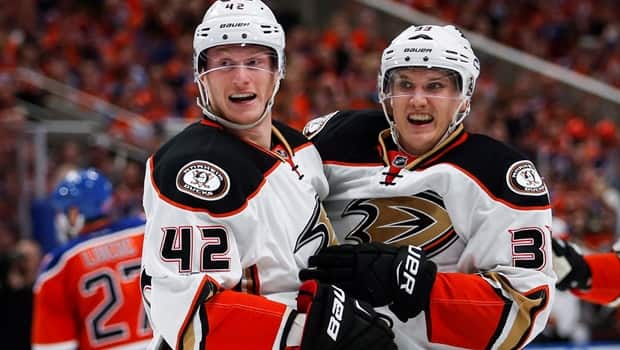 3 years ago
2:02
Anaheim defeated Edmonton 6-3 on Sunday, cutting the Oilers lead in the best-of-seven Western Conference semifinal series to two games to one. 2:02

The Anaheim Ducks rode a fast start to a 6-3 win over the Edmonton Oilers and got back into their playoff series Sunday.

Edmonton won twice in the Honda Center to kick off the matchup. The Ducks can even up the series doing the same at Rogers Place with Game 4 scheduled for Wednesday.

Anaheim scored 25 seconds after the opening faceoff and led 3-0 before the hosts countered in the final minute of the opening period.

"It's about getting ourselves back in the series, giving us a chance," Ducks captain Ryan Getzlaf said.

"You never want to fall down 3-0 in any series. It's a long climb. We take this one, learn from what we did right and wrong and get ready for the next one."

Jakob Silfverberg scored twice for the Ducks although his second and Anaheim's fifth of the game will irritate Oilers fans until Wednesday.

Edmonton challenged it for being offside, but the goal stood upon review.

"It's one of those, your eyes are telling you it's offside, but if you're the linesman you're going 'I don't know for sure' and the call on the ice stands," said Oilers head coach Todd McLellan.

"It's disappointing because they likely know it's offside, but they can't confirm it. Let's not kid ourselves. That wasn't the backbreaker. The backbreaker was the 25 seconds in." 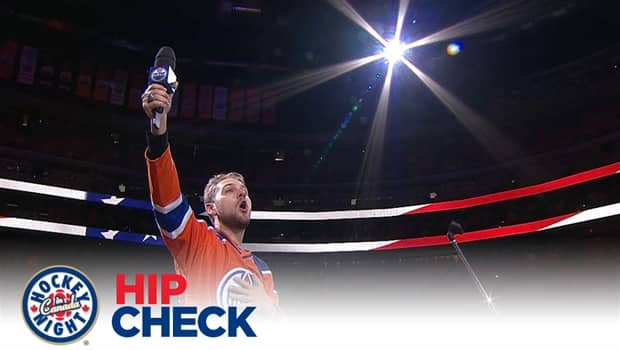 3 years ago
1:33
Oilers fans weren't fazed by technical issues prior to Sunday's game against Anaheim. 1:33

That goal scored by Rickard Rakell on a breakaway was the fastest to start a playoff game in franchise history. Getzlaf assisted on it and also scored.

Chris Wagner restored Anaheim's lead midway through the second period after the Oilers tied the game 3-3. Silfverberg also assisted on a Ryan Kesler goal for a three-point outing.

Edmonton's Connor McDavid scored his first goal of the series. Patrick Maroon and Anton Slepychev each had a goal.

Defenceman Kris Russell had a pair of assists for the Oilers, who took Game 1 of the series 5-3 and Game 2 by a score of 2-1.

"Whatever luck we may have had in Game 2 definitely wasn't there tonight," McDavid said. "We did a good job battling back to tie it up, but ultimately we definitely didn't deserve to win that one."

McDavid spun and cut back to lose defender Sami Vatanen and rifle a shot over Gibson's left elbow to pull the Oilers even at 8:40 of the second period.

But Wagner's shot that deflected off Talbot's arm and into the net 48 seconds later gave the Ducks a 4-3 lead heading into the third.

Talbot was stellar in Game 2 with 39 saves but the visitors got to him early, scoring on two of their first three shots.

Silfverberg got his stick on a loose puck at 5:32 when Oilers defenceman Adam Larsson failed to clear it away from Talbot. Rakell sneaked behind Edmonton's defence and corralled a long pass from Getzlaf for a breakaway.

"Tonight, it really showed we have to come out with that attack mentality," Silfverberg said. "It's something we've been talking about the two previous games.

The Ducks were heading to Kelowna, B.C., for their two-day break between games in Edmonton.

The Ducks are the more mature team in playoff years as they've advanced past the first round three times in the last four years and reached the conference final two years ago.

The Oilers are into the second round for the first time since 2006.

"The thing we're doing properly is responding to adversity," Getzlaf said. "We're not getting out of sorts.

"There's going to be ups and downs through every playoff game, every series and it's about controlling our emotions and using it to our advantage."