Pierre-Luc Dubois scored twice and added an assist to give the Columbus Blue Jackets a 4-3 win over the Canadiens on Sunday afternoon to sweep the season series with Montreal.

After digging themselves into a hole, the Montreal Canadiens nearly completely an improbable third-period comeback before falling short.

The Canadiens could not overcome two separate two-goal deficits in the third period in a narrow 4-3 loss to the Columbus Blue Jackets on Sunday afternoon.

Montreal remains eight points out of a playoff spot with 28 games left.

"You look around the league and teams come back from down two or three goals in a period," said Shea Weber, who scored late in the third. "The discussion in here was that it was definitely possible. If you don't believe, it's not going to happen. It didn't happen tonight but there was belief in here between periods."

"We couldn't get it done in the third." 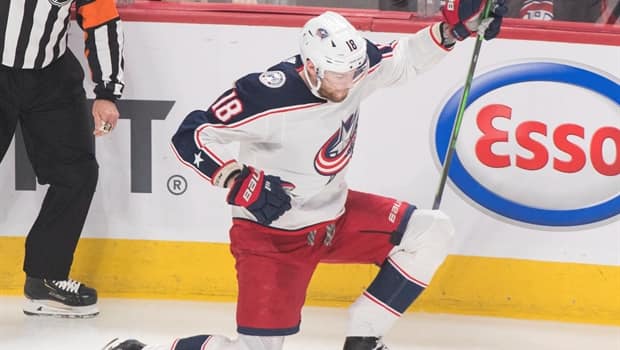 8 months ago
1:24
Columbus extended their point streak to eight games with a 4-3 victory over Montreal. 1:24

The Blue Jackets (28-16-9) played shutdown hockey with a 3-1 lead before a flurry of goals in the final five minutes made the game interesting.

The Canadiens (24-23-7) halved the deficit when Max Domi fired a shot past Elvis Merzlikins at 15:52, through traffic, for his first goal since Dec. 31.

With Carey Price on the bench for the extra skater, Gustav Nyquist scored the empty-netter to make it 4-2 Columbus with 1:53 remaining on the clock.

But Montreal was not done yet. With Price on the bench again, Weber pulled one back 52 seconds later on a slap shot from the point.

In the game's final seconds, the Canadiens squandered their last chance when Brendan Gallagher blocked teammate Phillip Danault's one-timer from the slot.

Both teams were playing the second game of a back-to-back set. Columbus lost 2-1 in overtime to the Buffalo Sabres on Saturday while Price blanked the Florida Panthers 4-0 in Montreal.

Elvis is in the building

Pierre-Luc Dubois scored twice and added an assist for the Jackets, who have not lost in regulation in eight consecutive games.

Merzlikins made 27 saves and improved to 10-2-0 since replacing injured starter Joonas Korpisalo.

"We were a little rusty," said Dubois. "We didn't play a full 60 minutes but we played well enough to get the win. At this point of the year, when it's just a race to make the playoffs, it's a huge win for us."

Added Merzlikins: "Overall the team played well. We blocked shots, which was awesome. Even if it's back-to-back after the break, we skated well and were fast."

Vladislav Gavrikov scored the opener for Columbus at 12:45 of the first, a wrist shot from the face-off dot for the defenceman's fifth of the season. The play started when Dubois stole the puck from Ryan Poehling along the half wall.

Dubois went from passer to scorer in the second when he beat Price on a long breakaway from his own blue line at 3:31. Weber's aggressive pinch, and Tomas Tatar's failure to track back, led to Montreal's defensive breakdown.

Tatar made up for the mistake six minutes later when he got the Canadiens on the board. Tatar scored glove-side on Merzlikins, seconds after Nick Suzuki intercepted a Dubois pass in his own zone.

Dubois restored Columbus's two-goal cushion with his 17th of the year on a backhand wraparound at 17:52 of the second after Price failed to freeze the puck.

"We didn't play a bad game but little mistakes cost us," said coach Claude Julien. "I don't think we got outplayed today. It was a tight game. The difference was the mistakes. We made a few that ended up in the back of the net."