Don Cherry is refusing to apologize for his controversial rant about new immigrants not wearing poppies, saying he could have kept his job as co-host of Coach's Corner if he'd agreed to become "a tame robot who nobody would recognize."

But his latest outburst about new immigrants not wearing poppies cost him his job, and in an interview Monday night he wasn't apologizing.

"I know what I said and I meant it. Still do. Everybody in Canada should wear a poppy to honour our fallen soldiers," Cherry told The Canadian Press, saying Sportsnet fired him.

Cherry, 85, had singled out new immigrants in Toronto and Mississauga, Ont., where he lives, for not honouring Canada's veterans and fallen soldiers. 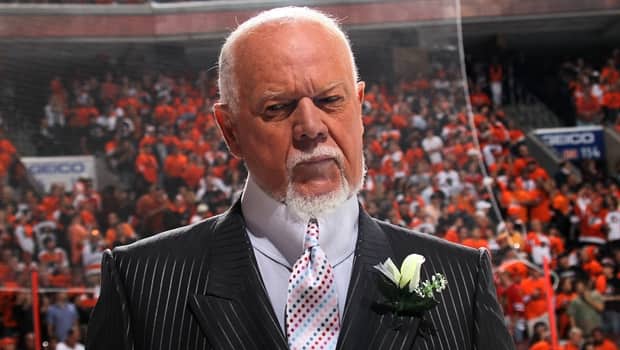 1 year ago
0:50
Don Cherry sparked online backlash on Saturday night for his comments about immigrants not wanting to wear poppies ahead of Remembrance Day. 0:50

Outrage over Cherry's words mounted until his dismissal was announced.

Cherry, however, denies he was singling out visible minorities.

"Irish, Scotch, anybody that's newcomers to Canada, and they should wear a poppy to honour our dead from the past, whether they're Scotch or Irish or English, or where they come from."

Cherry added that he could have stayed on "if I had turned into a tame robot who nobody would recognize." 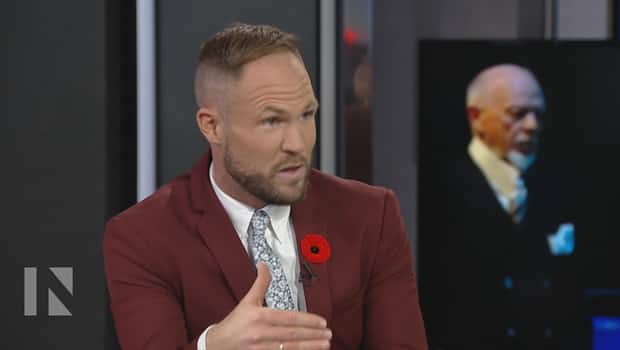 1 year ago
3:49
CBC Sports' Devin Heroux joins "The National" to discuss the many responses following Don Cherry's departure from "Hockey Night in Canada". 3:49

In a two-paragraph statement Monday afternoon, Sportsnet confirmed it was cutting ties with Cherry.

"Sports brings people together — it unites us, not divides us. Following further discussions with Don Cherry after Saturday night's broadcast, it has been decided it is the right time for him to immediately step down," said Sportsnet president Bart Yabsley.

"During the broadcast, he made divisive remarks that do not represent our values or what we stand for.

"Don is synonymous with hockey and has played an integral role in growing the game over the past 40 years. We would like to thank Don for his contributions to hockey and sports broadcasting in Canada."

Statement from Sportsnet: <a href="https://t.co/ah3twdx9po">pic.twitter.com/ah3twdx9po</a>

Shortly after, CBC also released a statement: "Don Cherry's remarks on Saturday night were divisive, discriminatory and offensive, and we respect Sportsnet's decision that this is the right time for Don to step down."

Statement from CBC: <a href="https://t.co/mAyp7WRwTd">pic.twitter.com/mAyp7WRwTd</a>

"While we recognize Don Cherry's four decades of service broadcasting NHL games, today's decision was a justifiable response to his comments on Saturday night. The opinions he expressed are in direct conflict with the values of diversity and inclusion that we embrace as pillars of our sport."

Cherry's ouster came after a segment that sparked a swift backlash from inside and outside the hockey world. Sportsnet apologized Sunday for Cherry's comments about his belief that new immigrants don't wear poppies, and in turn, don't support veterans.

WATCH: Dowbiggin on Don Cherry firing: 'What took so long?' 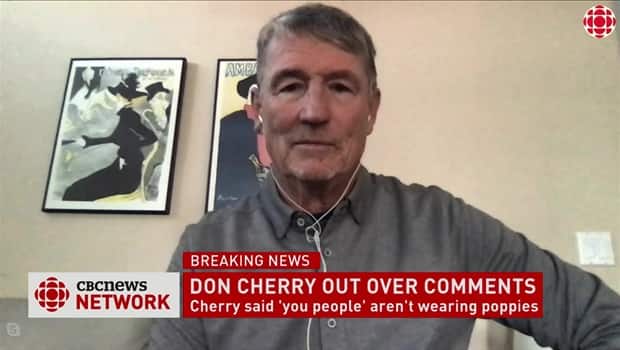 Dowbiggin on Don Cherry firing: 'What took so long?'

1 year ago
8:51
Former CBC Sports host and current Not The Public Broadcaster podcaster Bruce Dowbiggin weighs in on Sportsnet's decision to cut ties with the controversial longtime Hockey Night in Canada commentator. 8:51

Budweiser, the sponsor of Coach's Corner, put out a statement condemning Cherry's comments after Sportsnet's decision.

"The comments made Saturday on Coach's Corner were clearly inappropriate and divisive, and in no way reflect Budweiser's views," says the statement from Todd Allen, vice-president of marketing for Labatt Breweries of Canada, which has Budweiser as one of its brands.

"As a sponsor of the broadcast, we immediately expressed our concerns and respect the decision which was made by Sportsnet today."

Outrage over Cherry's words mounted over the weekend and into Remembrance Day until the broadcaster's dismissal was announced Monday afternoon.

1/2<br>Mr. Cherry’s personal opinion was hurtful, divisive and in no way condoned by the Legion. We do remain appreciative of his passionate support for Veterans.

2/2<br><br>We know many new Canadians understand and welcome the tradition of the red poppy and will continue to educate all citizens about the significance of this powerful symbol.

There was no immediate word on who might replace Cherry or if Coach's Corner would continue in its current form.

Shakir Mousa, who came to Canada from Iraq about 30 years ago, said earlier Monday he was hurt and disgusted by Cherry's words and worried they could ignite hatred and discrimination.

Though he wears a poppy to mark Remembrance Day, Mousa said there are many ways to honour those who serve their country — like his son, who served in Haiti, Afghanistan and Iraq and just returned to Ottawa from his most recent deployment.

"I come from a dictatorship country," the Montreal resident said. "There is a real appreciation for Canada and what Canada represents ... I appreciate what democracy is and what liberty is and the freedom that we enjoy."

"I don't need somebody like Don Cherry to tell me about it, because he doesn't represent the good side of Canada with comments like these," he added.

Others noted many newcomers have relatives who fought and lost their lives in various conflicts, including the world wars, something Cherry overlooked in his comments.

"Canada is my country as much as it is yours, both of us are settlers on this land," Pardeep Singh Nagra, executive director of the Sikh Heritage Museum of Canada in Mississauga, said in an open letter to Cherry posted over the weekend.

"When you are talking about 'our way of life,' people who look like me have 'built' your way of life. It isn't something exclusive, the sacrifices were made for us. Shame on you. You don't deserve to wear the poppy." 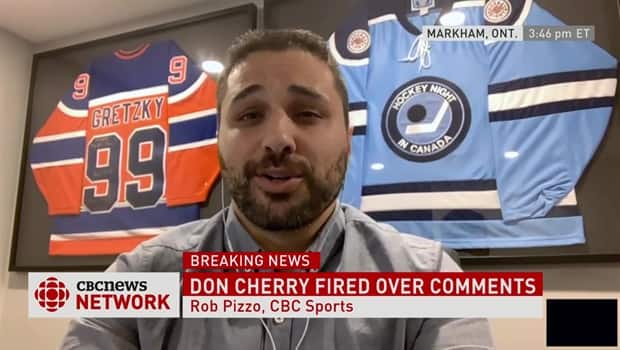 'You people': Rob Pizzo discusses the two words that got Don Cherry fired

1 year ago
11:21
CBC Sports' Rob Pizzo discusses the remarks that led to Don Cherry's ouster at Sportsnet, after a career full of controversial comments on Hockey Night in Canada's Coach's Corner. 11:21

The Canadian Broadcasting Standards Council said it was so overloaded with complaints about the segment that it exceeded the organization's technical processing capacity. The CBSC said it was dealing with the broadcast under its normal process, but was not able to accept any further complaints.

"Don Cherry made remarks which were hurtful, discriminatory, which were flat out wrong ... I owe you an apology, too. I sat there, did not catch it, did not respond," MacLean said. "Last night was a really great lesson to Don and me. We were wrong, and I sincerely apologize. I wanted to thank you for calling me and Don on that last night." 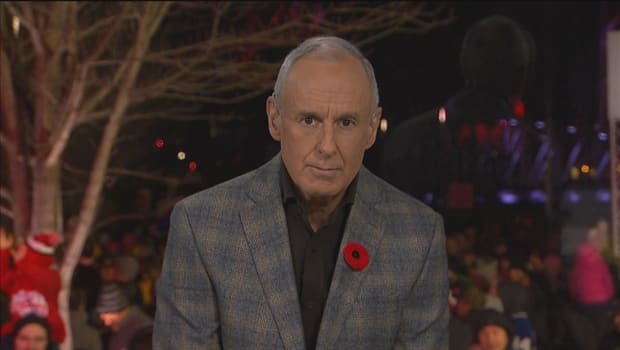 1 year ago
1:04
Cherry made comments on Hockey Night in Canada regarding new Toronto citizens not wearing poppies. 1:04

Speaking to a Toronto radio station on Monday, Cherry said he was "disappointed" in MacLean but still considered him a friend.

Criticism of Cherry's comments poured in quickly as video clips of the segment circulated online. A consistently polarizing figure throughout his long broadcasting career, Cherry also had his share of supporters weigh in on social media over the last couple days.

In an interview with SiriusXM radio on Tuesday, Cherry said most of his supporters stay silent because of fear of the backlash.

"They're afraid, I mean look what happened to me," Cherry told host Jeff Sammut. "And they're afraid and that's the way it is. And I'm not afraid, never have been afraid, and I paid for it with my job.

"Canada hasn't changed, it's just that the people that follow me keep their mouths shut."

A hard-nosed career minor-leaguer who won coach of the year honours with the NHL's Boston Bruins in 1976, Cherry moved in front of the camera in 1980. 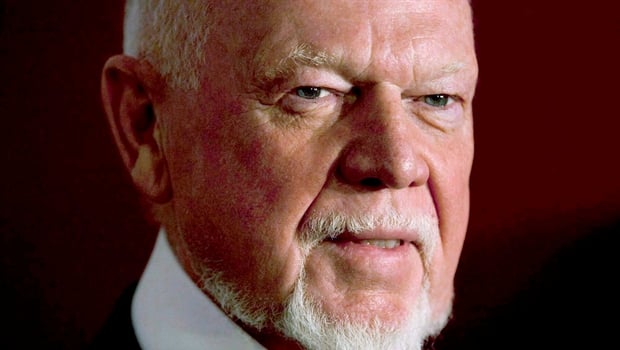 1 year ago
4:00
CBC's "The National" touches on the reactions of many Canadians following Don Cherry's remarks on "Coach's Corner". 4:00

Known for his outlandish suits and thumbs-up gesture, Cherry was liable to say anything during the popular first-intermission segment on Saturday nights. Over the years, he occasionally weighed in with thoughts on European players, francophones, and politics — to name only a few subjects — which often landed him in hot water.

Hockey Night in Canada was a longtime CBC Saturday night staple, but the show and its games moved to Sportsnet when Rogers landed a $5.2-billion, 12-year national broadcast rights deal with the NHL that began in 2014.