The National Hockey League Department of Player Safety announced on Twitter Friday the enforcer will have his in-person disciplinary hearing on Thursday for a hit to the head of Boston Bruins forward Loui Eriksson.

Forward must answer for hit to head of Bruins' Loui Eriksson 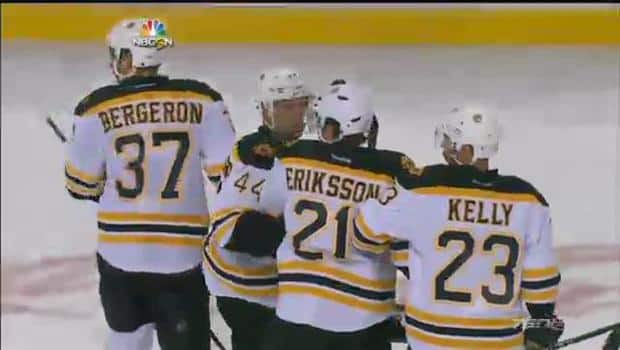 7 years ago
2:30
Boston Bruins forward is helped off the ice after a hit from John Scott who is given 5 and a game. 2:30

Buffalo Sabres forward John Scott will get some extra time to think about his actions.

The National Hockey League Department of Player Safety announced on Twitter Friday the enforcer will have his in-person disciplinary hearing on Thursday for a hit to the head of Boston Bruins forward Loui Eriksson.

Scott, a six-foot-eight, 270-pound native of Edmonton, had already been suspended indefinitely pending his hearing. An in-person meeting is scheduled whenever a suspension has the potential to exceed five games.

He will have already missed three games by the time the hearing occurs.

The incident in question occurred on Wednesday night in Buffalo's 5-2 loss when Scott swooped in and levelled Eriksson with a high hit as he was dumping the puck into the Sabres' zone.

Eriksson left the game, remained in Buffalo overnight and was diagnosed with a concussion Thursday. Scott was given a five-minute major and a game misconduct.

The Sabres are already without the services of tough guy Patrick Kaleta, who was suspended 10 games for a hit on Columbus Blue Jackets defenceman Jack Johnson.