The sorrow and the savage: Leafs' historic loss to Zamboni driver inspires range of emotional reactions

It's rare that a regular season NHL game in mid February is guaranteed to be remembered until the end of time. Saturday's win for the Hurricanes fits the bill as they were backstopped by a former Zamboni driver for the Maple Leafs' AHL affiliate. Naturally, this blew the mind of pretty much everyone in the hockey world.

It's rare that a regular season NHL game in mid February is guaranteed to be remembered until the end of time, but Saturday's meeting between the Toronto Maple Leafs and visiting Carolina Hurricanes is most definitely one for the history books.

That's because the former Zamboni driver for the Maple Leafs' AHL team played net for the Hurricanes.

For those just stumbling across this, here's a brief game synopsis: Carolina's starting goalie James Reimer left the game in the first period with a lower-body injury.

Jaccob Slavin gets hit into James Reimer. Reimer is ruled out for the rest of the game with a lower-body injury. Needless to say, this is a potentially huge deal for the Hurricanes.<br><br>Overhead view: <a href="https://t.co/3GZELPTV1m">pic.twitter.com/3GZELPTV1m</a>

Petr Mrazek was summoned to fill in for the injured Reimer, and was humming along nicely until he was bowled over by Toronto's Kyle Clifford, and was forced to leave the game in the second period with his team up 3-1.

Petr Mrazek to the locker room after being taken out by Kyle Clifford <a href="https://t.co/YXYDXLEaY5">pic.twitter.com/YXYDXLEaY5</a>

NHL teams only (usually) dress two goaltenders, so that meant the emergency backup goalie, David Ayres, was called into action. The former Zamboni driver has been a practice goalie for the Leafs' AHL affiliate Toronto Marlies for the past eight years, and also practices with the Leafs. 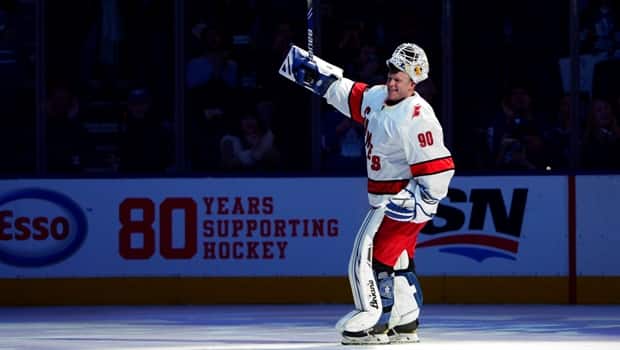 The heart-warming story of David Ayres

This was him in net during the Maple Leafs outdoor practice in front of city hall:

So he's faced plenty of shots from pro players, but Saturday was the first time he'd been called into action in an NHL game.

Long story short, Ayres allowed two goals on the first two shots he faced, but he and his new team held on for a 6-3 win.

At 42, he became the oldest goaltender in league history to win in his NHL debut.

The win caught the attention of popular video game EA Sports NHL which tweeted out a hypothetical picture of Ayres on the cover.

retweet if you want this <a href="https://t.co/hJFdXFEZS0">pic.twitter.com/hJFdXFEZS0</a>

Naturally, all of this blew the mind of pretty much every hockey fan on social media, including those that knew him personally.

I have texted Dave Ayres to fill in as a men’s league goalie roughly 4,128 times over the last 15 years. This is bananas.

A couple of fellow NHL goaltenders also got in on the conversation.

Me: “Did you hear what happened in Toronto?”<br><br>Carey Price: “I heard the zamboni driver’s going to win the Vezina.”

Ayres has more wins in Toronto than I do smh

And then there was Ayres' wife, Sarah, who had to watch nervously from Scotiabank Arena alone after her husband ditched her to, you know, make his NHL debut and all that.

But in all of the excitement for Ayres success, there were also some extremely distressed Leafs fans who had to watch their beloved team muster just eight shots in 30 minutes of play.

Still wrapping my head around the existentialism of a team employee administering the most humiliating loss in history on the Leafs. It’s like the hockey Gods discovered a whole new room in their lair of dark magic

But hey, no matter what the Leafs players are feeling today, at least they'll be able to discuss it with the guy who put them here in the first place.