As their league sells off trophies and jerseys, the Calgary Inferno's championship season was recognized Monday with the city's mayor proclaiming it "Calgary Inferno Day."

As their league sells off trophies and jerseys, the Calgary Inferno's championship season was recognized Monday with the city's mayor proclaiming it "Calgary Inferno Day."

A week after the Inferno hoisted the Clarkson Cup in Toronto on March 24, the Canadian Women's Hockey League abruptly announced it would fold because the six-team league was "economically unsustainable."

Inferno general manager Kristen Hagg told city council neglect by the media and the public contributed to the CWHL's downfall.

"We live in a society where people do not value women's sport," Hagg said. "Most of us have been socialized to accept men's sport as dominant and somehow automatically more interesting. The problem is that once society internalizes falsehood, it's not easy to correct it. 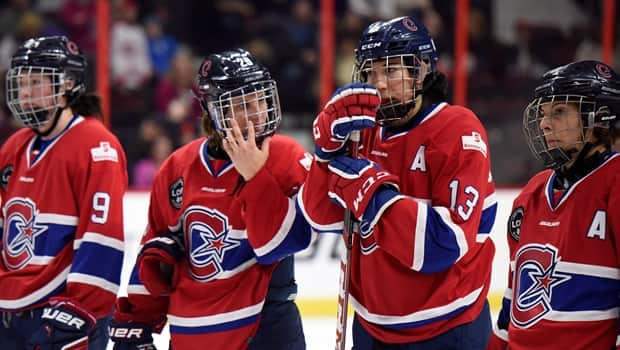 "I've been to NHL games that are boring. Someone is playing the trap or maybe they just don't have it that day. They do play 82 games in a season after all. People watch women's hockey and if it isn't on-the-edge-of-your-seat-exciting for 60 minutes, it's not just worth their while."

The CWHL has begun auctioning off pieces of its 12-year history including the Jayna Hefford Trophy that goes to the MVP.

People say they support women's hockey on social media, but that support does not extend to buying a ticket to a game, Hagg added.

"The level at which these players are able to perform and the things that they are able to accomplish with limited support is truly inspirational," she said.

"The impact these women had on young girls in this community is profound. It would be a significant lost opportunity if professional women's hockey were gone from this community for good."

The addition of two Chinese teams helped the CWHL start paying its players out of a budget of $3.7 million in 2017-18.

A financial statement indicated the season produced a surplus of just over $200,000 for the league.

But the amalgamation of the two Chinese teams into one and the loss of financial backing from Roustan Capital reduced revenue in 2018-19.

The head of Roustan Capital — W. Graeme Roustan — stepped down as a league governor in November over a dispute over financial transparency.

Interim commissioner Jayna Hefford, a former player who took over last year when Brenda Andress stepped down after 11 years, said the league would not operate next season even if a financial saviour came riding to the rescue.

So more than 150 players and team personnel have been left wondering where they will ply their hockey skills next season.

Performances by women at the NHL all-star skills competition in January raised the profile of female hockey, but that didn't generate a sustained boost for the Inferno, Hagg said.

"Media was buzzing around it for about a week and then we went back to being Calgary's best-kept secret," Hagg said. "By far the most significant attention from the media this season came when the league folded.

"We need the media to give elite female hockey players an opportunity to show what they can do, not just at the Olympics, not just three CWHL games per season.

The U.S.-based NWHL announced its intention to expand to Toronto and Montreal after the CWHL said it was shutting down.