Oilers captain Connor McDavid said he seems to be OK following a scary leg injury in Edmonton's season finale against the Calgary Flames on Saturday night.

Connor McDavid felt his leg injury was more serious than it actually was when he crashed into the net and limped off the ice during Edmonton's season finale against the Flames Saturday night.

Luckily for the Oilers, whose season couldn't really get much worse, their captain appeared to be OK the next day.

X-rays on McDavid, who slammed into the goalpost while cutting to the net when tripped by Calgary's Mark Giordano, were negative. He was scheduled to have an MRI on his knee Sunday to assess any damage and results won't be known for a day or two.

"Being completely honest, I thought my leg was in two pieces when I was sitting on the ice," said McDavid, sporting a knee brace as he faced reporters Sunday afternoon. "Thankfully, the bone is OK. Thankfully, I was able to get up and with a lot of help I was able to get off.

"Like I said, we still don't know too much, but things look fairly positive right now, but we haven't had a picture in there." 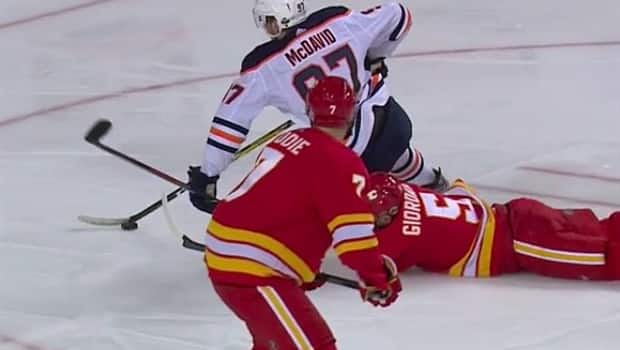 2 years ago
3:24
Connor McDavid flew into the post at high speed, slamming his leg and requiring the trainer’s assistance to get off the ice as the Oilers played their final game of the season. 3:24

Out of the playoffs for the 12th time in the last 13 years and having fired their coach and general manager, Edmonton has set up an off-season that stands to see substantial changes in hockey operations. And the Oilers don't need any kind of serious injury to McDavid added to the mix.

"They pay me $100 million to play my game," said McDavid, when asked about charging full-tilt to the net in a game that didn't make a difference to the team's playoff chances. "Part of my game is beating guys wide and going to the net.

"I'll have to give my money back if I stop doing that. I'm not doing that."

Coach Todd McLellan was dismissed Nov. 20. GM Peter Chiarelli was fired Jan. 23. CEO Bob Nicholson has his work cut out re-shaping hockey ops for the Oilers, who finished 35-38-9 despite career years from McDavid and Leon Draisaitl, who scored his 50th goal against the Flames.

"It sucks," Draisaitl said. "Obviously, you go into every season trying to make the playoffs, trying to win the Stanley Cup. That's why you play.

"When you kind of get that taken away from you, due to our play, it's no one's fault but ours, it's frustrating and, yeah, it sucks, but we have to figure this out. We have to be better as players."

Ken Hitchcock took over from McLellan and assistant GM Keith Gretzky replaced Chiarelli on an interim basis. It remains to be seen if, or in what position, they will return.

Hitchcock guided the Oilers to a 26-28-8 record. He has two years remaining on a consulting contract the Oilers assumed from the Dallas Stars but convention dictates the new GM will pick his coach.

Gretzky, who was hired by Chiarelli, will get consideration as his replacement, but Nicholson has promised an exhaustive search for candidates.

"For me, this has really invigorated me," Hitchcock said when asked if he wants to return as coach. "I've never experienced anything like this in my life where you're on every day, all the time, and I really enjoyed it.

"It's 100 per cent in someone else's hands. There's a president and general manager, they're the guys that make the decisions. Not me. That's up to them. I'm just telling you how much I enjoyed it."

'This year is frustrating'

McDavid, who finished his fourth season in Edmonton with a career-high 116 points, expressed frustration after a 3-1 loss to the Vegas Golden Knights April 1, when the Oilers were eliminated from post-season contention. At the time, McDavid characterized his frustration level as "really, really high."

McDavid clarified his comments Sunday after speculation he is unhappy in Edmonton.

"This year is frustrating," he said. "A lot has already been made about what I said in Vegas, but I'd be a complete loser if I wasn't frustrated. You know, it's frustrating personally. It's frustrating as a group. You want to be in the playoffs. You want to be competing late in the season, but that's not where we're at, so we've got some stuff to figure out, like I said."

Even with McDavid at the top of his game, Draisaitl scoring 50 goals and breaking 100 points (105) for the first time, plus solid seasons from Ryan Nugent-Hopkins and Darnell Nurse, the Oilers never mounted a sustained playoff push.

"We're going to get it right," McDavid said. "I know Bob [Nicholson] is on a mission to right the ship here and I'm confident he will.

"I want to be here. If I didn't want to be here, I wouldn't have signed an eight-year deal. I love the guys and the city. There's obviously going to be changes both on and off the ice. That's just the facts of it. I'm here to be part of the solution. That's that."