The Columbus Blue Jackets rebounded from a dismal start to stun the team that had the NHL's best regular-season record.

Jones made it 4-3 from the slot with 5:55 to play as the Blues Jackets erased a 3-0 deficit after the Lightning scored three times in the opening period.

With Columbus trailing 3-1 in the third, David Savard deked around Lightning defenceman Victor Hedman and scored 7:56 into the period to make it a one-goal game. Josh Anderson picked up a short-handed goal that tied it at 3 at 11:54. 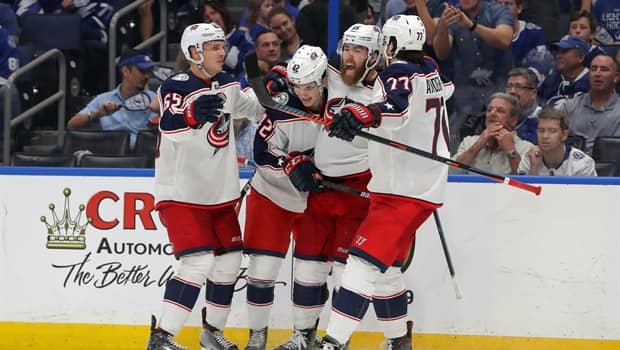 The Blue Jackets became the 27th NHL team to overcome at least a three-goal deficit to win a playoff game in regulation.

Nick Foligno had the other goal for Columbus, and Sergei Bobrovsky ended up with 26 saves after struggling in the first period.

The Lightning, who matched the 1995-96 Detroit Red Wings for the most wins in a regular season with 62, got first-period goals from Alex Killorn, Anthony Cirelli and Yanni Gourde. Andrei Vasilevskiy stopped 22 shots.

"Our mentality was, we wanted to outscore them tonight instead of build a lead and then shut then down," Lightning coach Jon Cooper said. "Our mentality has to be when we get in these situations is shut teams down, not to add to the lead."

Hedman returned after missing the final four regular-season game with an upper-body injury. The Norris Trophy winner took a helmet to the face during a collision with Washington's Carl Hagelin on March 30.

Killorn stole the puck from Jones at the blue line during a power play for Columbus and put a backhander past Bobrovsky to open the scoring 4:12 into the game. Tampa Bay was tied for third in short-handed goals during the regular season with 12.

After Cirelli had a rebound goal at 11:01, Gourde's waist-high deflection of Mikhail Sergachev's shot made it 3-0 with 2:10 left in the first.

"We're just losing too many battles," Blue Jackets coach John Tortorella said of his first-intermission message. "Just the grind of the game. We have to be able to grind with them."

Foligno cut the deficit to 3-1 at 9:15 of the second on a breakaway goal after Tampa Bay's Ryan McDonagh made an errant pass in the offensive zone.

Alexandre Texier, Columbus' 19-year-old rookie who played in the Blue Jackets' final two regular-season games, skated in alone on Vasilevskiy but missed the net on a shot with 4 minutes to go in the first.

Bobrovsky stopped four shots over the final 40 seconds of the second, including a nifty glove save on Steven Stamkos.

"We don't have a chance if he doesn't play the way he played through the second and the third," Tortorella said of Bobrovsky.

Nikita Kucherov, who had an NHL-best 128 points in the regular season, was held without a point but had an in-close chance turned aside by Bobrovsky and hit the crossbar during the opening minute of the second during a power play.