The Tampa Bay Lightning have retired Martin St. Louis' uniform No. 26 — the first player in franchise history to receive the honour.

Former captain 'forever will be the heart, soul of this organization' says Steven Stamkos 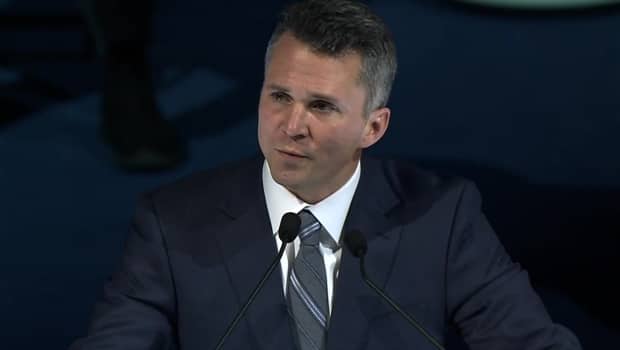 4 years ago
2:52
St. Louis is the first player in Lightning franchise history to receive the honour 2:52

On a night when the Tampa Bay lighting, fell 3-1 to the Columbus Blue Jackets the Bolt's retired Martin St. Louis' uniform No. 26—the first player in franchise history to receive the honour.

The tribute to St. Louis took place in a pregame ceremony.

"It was just amazing to see and be able to celebrate a player that we all admired that we grew up watching or played against," said Nick Foligno of the Blue Jackets. "I thought, for one, it was an amazing thing to experience and a pretty proud moment for him and his family."

"Wow. What a night," said St. Louis, who teared up during his speech when talking about his late mother. "It's such an incredible honour."

"Every day wanting to be better and making his teammates better, it's such an inspiration to me to have been part of his journey," Tortorella said. "I just have so much respect for how he did it. It's just unbelievable."

St. Louis began his NHL career with Calgary (1998-2000) and signed with Tampa Bay as a free agent in 2000, playing there until 2014, when he was traded to the New York Rangers. He retired from playing in July 2015. "He was, still is, and forever will be the heart and soul of this organization," Stamkos said.